What caused the stagnation in real wage growth in the later half of the 20th century?

During that time, U.S. per capita GDP grew briskly, "average" (mean wages) grew slowly, and "median" wages grew hardly at all. What reasons do economists cite for the differences in outcomes?

My particular concern is, what historically has occurred in North America such that one income barely is enough for shelter in a large city, when before one income supported a family? Is there, for instance, a rural/urban divide?

I am surprised no one has mentioned this yet. It has to do with the USA leaving the Bretton Woods agreement and the globalization results (aftermath) that came from it. And not to digress into whether Bretton was sustainable, because in many ways it was not. But it is no coincidence that productivity levels and wage growth remained consistent from the end of ww2 until 1972, after then they grew at alarmingly different rates.

"Since the early 1970s, the hourly inflation-adjusted wages received by the typical worker have barely risen, growing only 0.2% per year. In other words, though the economy has been growing, the primary way most people benefit from that growth has almost completely stalled." link

After 72 wealth generated from productivity no longer went to the workers, labors share of income has fallen from around 70% to around 50% now. This is from a variety of factors, the wealthy just taking more, but also due to outsourcing of jobs, mechanization, automation, and more competition in production leading to lower profit margins.

"Since the late 1970s, large wage gains have accrued to workers at the top of the distribution, and wages have been declining or stagnant for the bottom half of the income distribution.

Assigning relative responsibility to the policies and economic forces that underlie rising inequality or declining labor share is a challenge. International trade and technological progress have played significant roles, putting downward pressure on the wages of low-skilled workers. For example, as imports from low-wage countries made inroads into the manufacturing sector, job losses in the United States were substantial in some areas. At the same time, U.S. manufacturing has learned to produce more with fewer workers." link

Finally I will add that the growth of monopsonies (or near monopsonies) have had a large effect on wages. It is hard to leave one job for another with a better wage if that same conglomerate controls nearly all those jobs in your town. It is the same on the regional level (and national level) for most blue-collar jobs.

"New research by Benmelech, and Nittai Bergman and Hyunseob Kim of the National Bureau of Economic Research, indicates that the hidden culprit is what economists call labor-market concentration—too few employers competing for the same workers on a local level.

In other words, say a factory employee is dissatisfied with his pay and hears that a competitor across town is offering higher wages. He may switch employers. However, if there is no competitor to switch to—that is, if the local labor market is highly concentrated—then he must accept the wages at his current job.

“There has been a discussion in recent years about what happened to middle-class Americans,” Benmelech says. “We don’t say that we have the only explanation, but we have an explanation that is consistent and can explain the long-term phenomenon of stagnant wages...

...So many things have happened in the last 40 years—you have different policies, and the world is changing. But employer concentration seems to be an important factor,” he says. “It probably explains at least 30 percent of the fact that wages have not been increasing. And for economists, that’s a large amount of explanatory power.” link 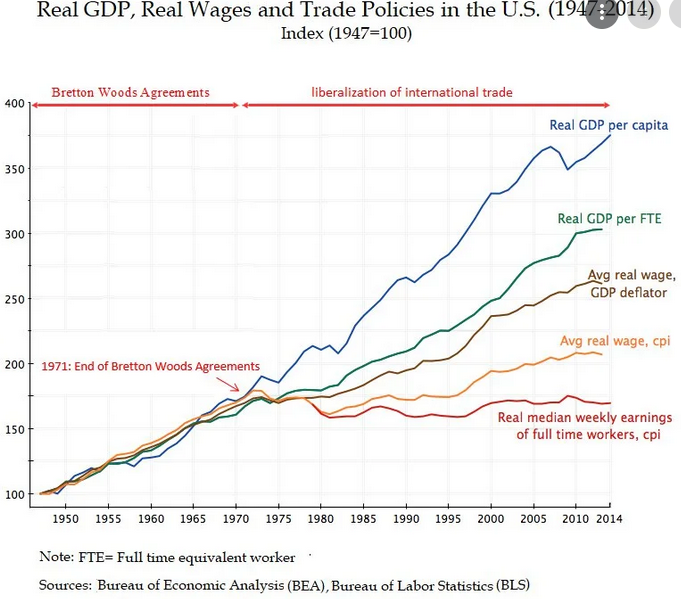 Not really a full answer, but perhaps a start...

What families, or indeed most individuals, consider to be necessities today were often not even luxuries in say 1950 or 1970. Just a few items from a quick search:

The average American cell phone bill for a family of four runs $120 to $220 per month. ( https://www.tomsguide.com/best-picks/best-family-cell-phone-plan ) They may well pay for a land line as well. I don't know if that includes the cost of the phones: if not, add more money.

Average cable TV bill runs around $217/month. (https://decisiondata.org/news/report-the-average-cable-bill-now-exceeds-all-other-household-utility-bills-combined/ ) In 1970, most people got three TV channels over the air, for free.

Average spending on computers & other electronic gadgetry is $100/month. (https://www.eetimes.com/americans-spend-1200-a-year-on-tech-gadgets/# ) None of that existed in 1970.

So right there we have $500-600 per month that a family spends now on things that didn't even exist 50 years ago.

In 1950, the average home was 983 ft2. By 1970 it had increased to 1500 ft2, and in 2020 to 2261 ft2. (https://www.investopedia.com/articles/pf/07/mcmansion.asp ) Assuming the inflation-adjusted cost per square foot remained the same, housing costs more than doubled. And the price probably didn't remain the same, as amenities like air conditioning became more common.

Then there are vehicles. In 1960, the typical household had a single car. By 2017, most had two or more. (https://transportgeography.org/contents/chapter8/urban-transport-challenges/household-vehicles-united-states/ ) In addition, many households will have various sorts of recreational vehicles: RVs or camping trailers, ORVs, dirt bikes, jet skis, snowmobiles... Again, most of these didn't exist in say the 1960s.

PS: I would also guess that the expansion of credit is also a factor. The average auto loan costs $769-895 per year, while the 43% of credit card holders who carry a balance (rather than paying in full every month) pays about $855 per year. (https://www.thesimpledollar.com/loans/personal/heres-how-much-the-average-american-pays-in-interest-each-year/ )

Bottom line: the definition of support has changed. The double incomes are needed because the family buys a lot more stuff.

In a word, globalization.

Since the colonization of North America, and even before the inception of the "United States," labor has been the scarce factor of production, compared to land, or even "capital." So labor has always been highly compensated in the United States, compared to foreign countries. That's why the United States has had periodic "immigrant" scares, the fear that a flood of incoming foreign labor, particularly from low wage countries, would depress the wages of American workers.

Beginning the middle 20th century, transport (e.g. airline) and other costs (e.g. TV, internet, etc.) took a steep nosedive. The resulting "globalization" brought about stiff competition for American labor. Some of it came in the form of actual immigration. But most of it resulted from the fact that goods produced cheaply abroad at below-U.S. wage rates, could also be shipped cheaply to our shores. U.S. wage rates wouldn't fall to "foreign" levels, but they could approach the sum of these foreign levels plus newly-lowered shipping costs.

There are two sides to this problem: income and outcome (i.e. spending) . Let's examine both of them:

Overall, as US gradually declined from democratic republic into corporate oligarchy, average worker saw his wage stagnating and even declining, while social pressure put on him demanded that he spends more and more. In such circumstances, average wage in major cities barely covers the cost of individual, and raising a family is impossible without both spouses working .

It has already been mentioned that more people have double income today, and therefore what they consider necessary has changed.

But there is also a reciprocal effect: Society requires you to spend more money. As an example, one significant part of living expenses is always housing. It would be very hard if not illegal today to live like many normal people in my country used to live 70 years ago. Warm water and one bathroom per flat aside: Most landlords will not rent you a flat if you are more than one person per 18 sq.m. And at some point (less than 10 sq.m. per person?) you will even run into trouble with the authorities. I think in the US this may play out somewhat differently, e.g. with people now living in suburbs and needing cars when in the past they would have been able to get to work without a car.

Not the answer you're looking for? Browse other questions tagged united-states economy or ask your own question.