Can you identify this dress uniform (Lucknow, India, around 1911)?

My husband’s grandmother, born illegitimate, did not know her father. She was told that this is him. She was conceived in India in November 1911. I would like to identify the dress uniform. I know it’s not a great deal to go on, since there are no cap badges, etc, visible. However, there are clues, for example in the curled trim on the sleeves. In later years, she recorded her father’s name as “Edward Jones,” on her marriage record in India in 1932. 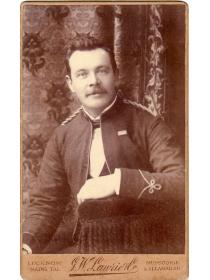 Browse other questions tagged military identification india british-empire or ask your own question.