How do I learn more about untitled artworks on the internet? (like this specific Basquiat painting)

Since many of Basquiat's works are untitled, I'm having a hard time finding more historical details on the internet about specific paintings he made. For example, how can I learn more about this painting, or even find any information about it? 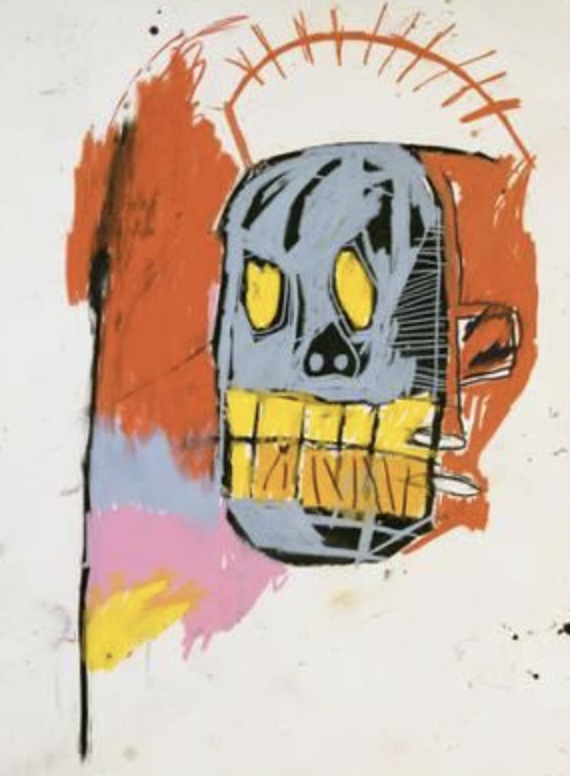 art.com calls it "Untitled", this book "JEAN-MICHEL BASQUIAT" by Dieter Buchhart calls it "Untitled, 1983", this KidRobot figurine that uses the image calls it "Mad Robot", and this google image search using a screenshot of the painting returns barely any results, and none specific to the work, despite recognizing it as a Jean-Michel Basquiat work. This list on Wikipedia of Jean-Michel Basquiat works has 219 images, but none of the work in question.

So I'm asking a question about this specific artwork: what is it called? How can I learn more about it?

I'm also asking a more general question: how does anyone find information on the internet about untitled artworks by prolific artists? It's actually kind of a scary experience to look for something on the internet that I expected to be easy to find, only to realize that the internet is primarily concerned with documenting the very most popular pieces of pop-culture. My local library lists several books by, and about, Basquiat the artist and person, but what if they don't mention this work? Is my only option really to read 10 books and hope that this painting might be described in one of them?

You have to go a bit old-style and search through academic publications on the artist. While the Internet can help a lot for finding specific books, catalogues and articles that may be online; unless you know the location or owner of the artwork it will be hard to find a "search tool" that just gives you an instant result and info on particular "untitled" works, specially with artists as prolific as Basquiat. Museums and galleries websites can also help, specially the bigger ones. Google Academic might be a bit better than just Google.

10
How to validate a historical source
16
Please help find these paintings
48
Is the photograph "England’s Revenge in India" real, staged, or fake?
1
Historical documents of Mount Athos
11
How is progress in history made?
8
What is the original source of this 16th century image of a French town holiday with musicians in a tree?
3
Is the use by old masters of camera obscura and optics in general a taboo topic in Art History, or was David Hockney's thesis wrong?
4
How were ancient Indian mathematical texts found to modern scholarship?