Did viking longboats in fact have shields on the side of the ships?

We are currently working on an educational video game about the Viking Age. In this we want to make as historically accurate illustrations as possible.

I myself am working as a historian on the project. Many years ago I worked with Viking Age history, and I remember a discussion on whether or not vikings stored their shields on the side of their longboats when they travelled.

As far as I remember, archaeological and historical sources indicate that they did, though modern experimental archaeology has had difficulties figuring out exactly how it would be pratical to do this.

I am looking for arguments from both sides, and would really appreciate source citations (preferably peer-reviewed, but anything can be useful), so I can read the research and present it to our team.

Yes, archaeological evidence strongly suggest that at least some warships did but, considering the vast numbers of ships that were built during the Viking age - and in many different locations - we cannot assume that all Viking Longboats had shields along the side as only a small percentage have been recovered. Further, it's hard to know in what situations the shields were placed along the side of the ship.

On the archeological evidence,

An interesting feature of the war vessel is the uppermost board or plank, which carries the so-called "Shield List", where all the shields of the warriers [sic] were tied up. They were painted in various colours, usually made of tough wood, mainly oak. To that group of vessels belong the so-called "King" or "Chieftan" vessels of luxury class, wider and more roomy than the normal vessels.

One example is the Gokstad ship, a decorative war vessel.

The Gokstad vessel...is 23.2 m long and 5.25 m wide in the middle. The depth from railing to keel was 1.95 m. It has 16 boards or planks on either side. Board No. 3 from above had 16 oar-holes on either side. To these holes 32 shields were fastened with consecutive overlapping. Shields were painted alternatively yellow and black. Thirty-two oars were found and the remains of three rowboats, the largest about 10 m long. The number of shields indicates a crew of about 70 men, making two shifts for rowing. The chieftan was buried around the year 900 AD.

The Gokstad was built around 890 and was "a fast and flexible ship that was suitable for voyages on the high seas." When the ship was excavated in 1880,

The remnants of thirty-two overlapping shields, alternately painted yellow and black, were fixed to each side....Securely tied, they hung from a batten on the uppermost or sheer strake (and not slotted behind a rail on the outside of the ship, as with Skuldelev 5).

There is also the Oseberg ship, another Norwegian vessel.

The Oseberg vessel, similar to the Gokstad vessel is 21.4 m long, beam width 5.1 m and depth railing to keel is 1.58 m. It has 12 board planks on either side,... The upper board plank has 15 oarholes on either side. The shield plank is rather thin.

Per Bruun cites another example of a ship with shields, known as a Skuldelev 5, probably built in Ireland. This is at the Vikingeskibsmuseet (Viking Ship Museum), in Roskilde in Denmark, near where many ships were found. Below, a museum reproduction shows how the shields were held.

"A wooden 'list' used as a shield rack (a narrow strip of wood cut from the edge of a board, with spacers to provide a narrow gap between the list and the ship, shown here) running along the outside of the gunwale behind which the crew could place their shields, shows that the vessel Skuldelev 5 was undoubtedly a warship. It is an example of the smallest category of warship, a snekkja, as mentioned in written sources from late Viking times and the early Middle Ages." Text and image source: Viking Ships of Roskilde

The National Museum of Denmark concurs that the evidence from Skuldelev 5 indicates shields along the side:

The Skuldelev 5 warship from Roskilde Fjord has given us valuable knowledge about how shields were mounted on the side of a ship. Along one side of the ship the remains of a so-called shield rack are preserved.

and attributes their function as a defensive one "against incoming spears and arrows." The article then goes to note that

Test sailings with a similar shield rack have, however, demonstrated that a ship’s sailing capacity is reduced considerably when shields are mounted along its side. It is therefore probable that the shields were not mounted until immediately before military action.

Artwork also provides some evidence. Unfortunately, the details as to how (and when) the shields were attached to the ship (if at all) tend to be unclear (not surprising given these are mostly stone engravings). Possibly the best depiction is on an 8th or 9th century picture stone in Gotland, Sweden. 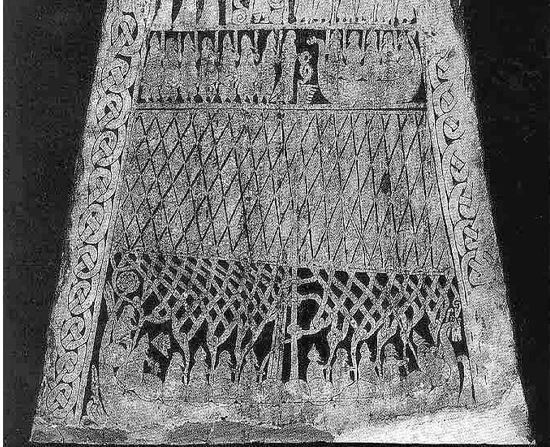 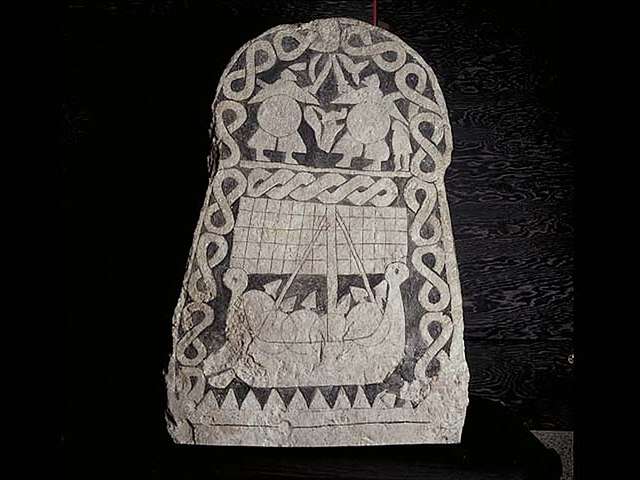 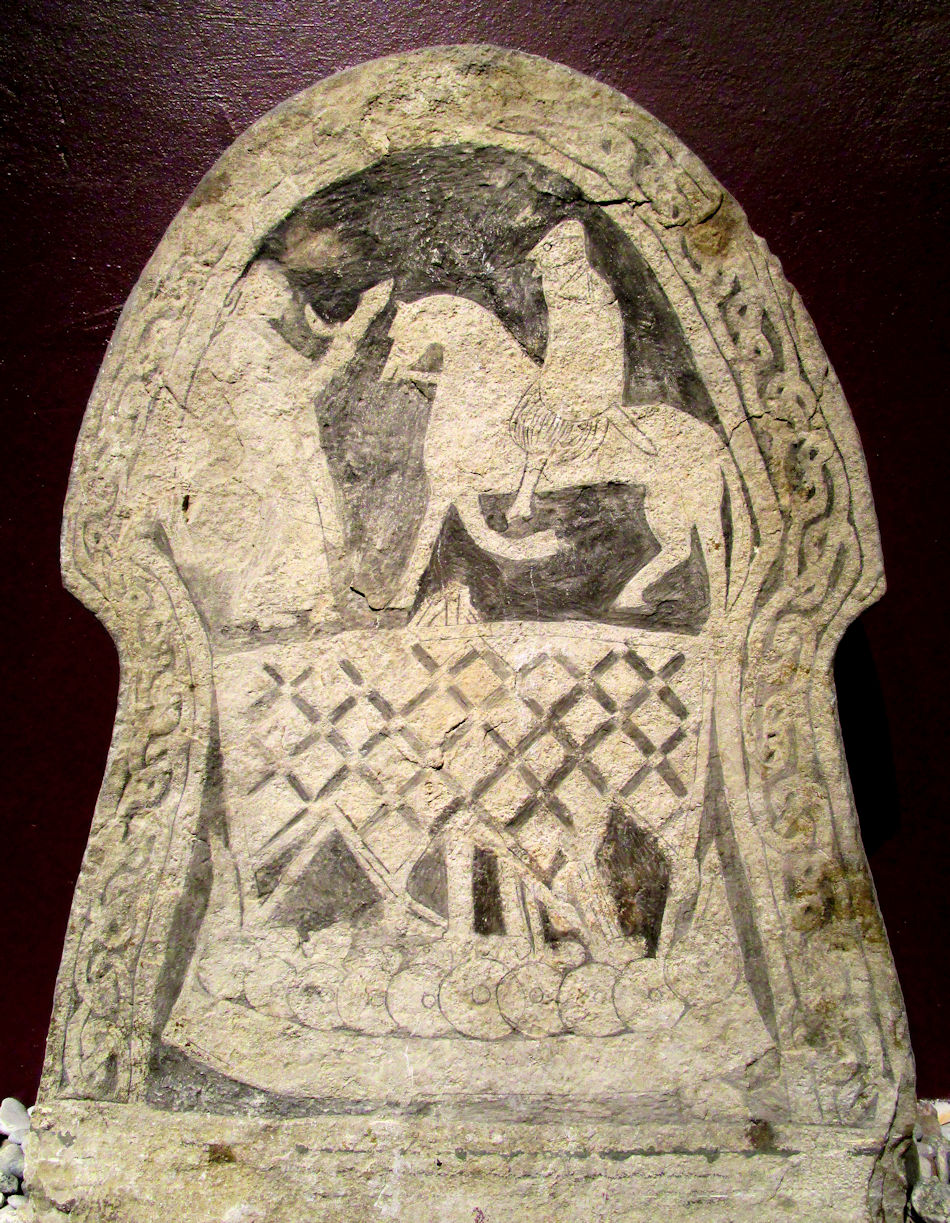 "Picture Stone from Broa in Halla....The ship depicted on the stone does not rank among the larger vessels, but is well equipped with shields along the gunwale and a resolute crew.". Dated circa. 700–800. Source: viking.archeurope.info

Finally, there is also some evidence from coins but, again, it is unclear how the shields were attached. 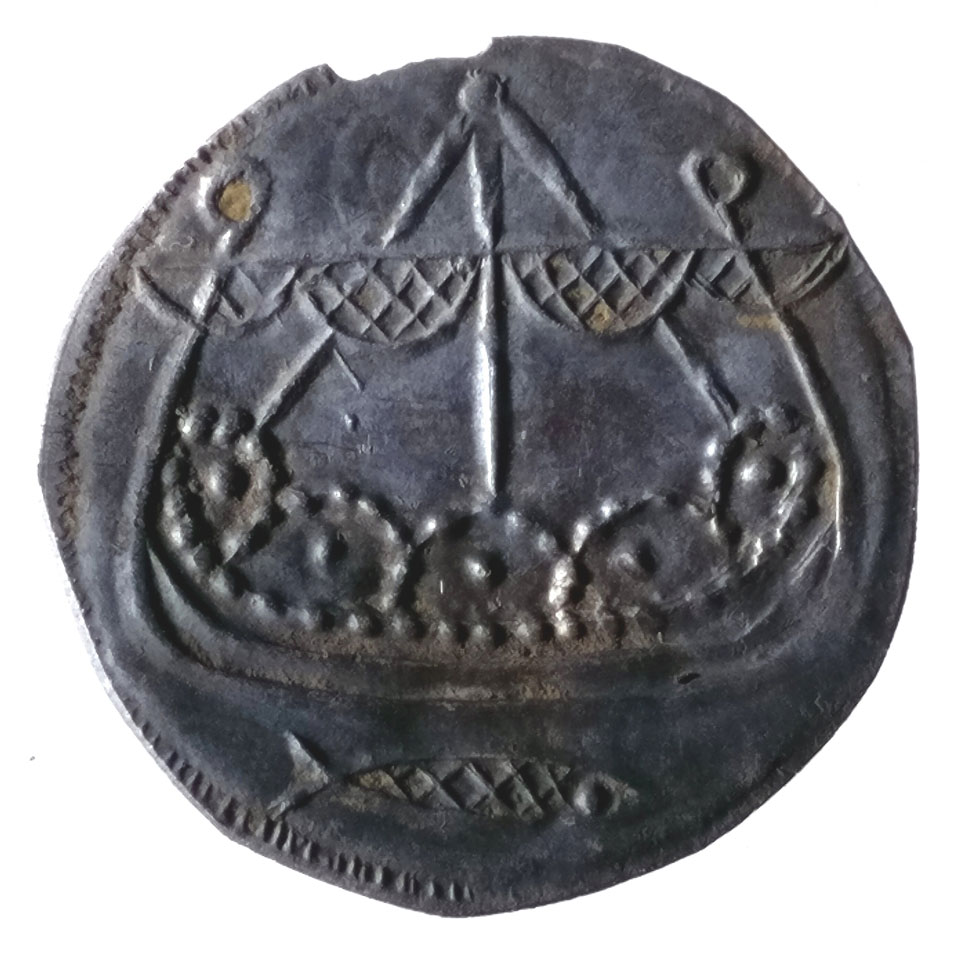 Since you are asking for "arguments from both sides" I give you my arguments, without references, except some pictures of somewhat later period.

It is unlikely that the shields were hanging outside as shown in many modern pictures, when traveling:

Remark. You can see several good modern replicas of Viking ships on YouTube, and have some idea how they were handled; some of them are quite faithful copies of the archeological finds. But there is one substantial difference: modern large Viking ship replicas designed for open sea usually have decks, for safety and comfort reasons. True Viking ships did not have decks.

Here is a fine 11 century picture from Bayeux Tapestry (there is almost nothing else available of this quality): https://sciencenordic.com/archaeology-denmark-history/what-vikings-really-looked-like/1374457 (scroll down). It shows very clearly how the shields were stored. Here is a good quality full reproduction of the tapestry: https://www.bayeuxmuseum.com/en/the-bayeux-tapestry/discover-the-bayeux-tapestry/explore-online/ It has plenty of ships shown in great detail.

I think this has some relevance to the discussion:

Three different events depicted in the Bayeux Tapestry (11th century, Norman conquest of Britain) showing Norman longboats with shields on the sides of the boats : 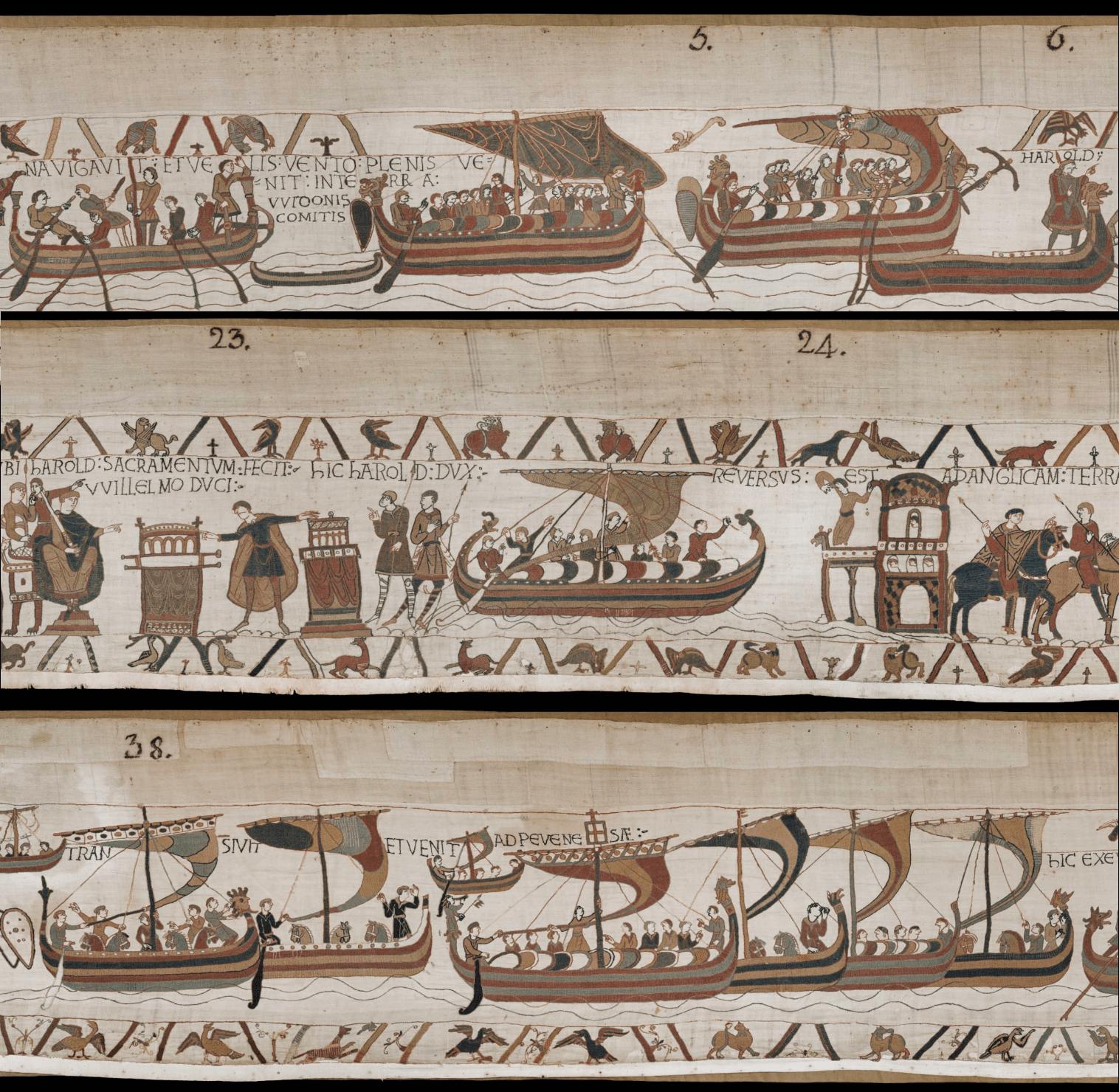 The boats without shields appear to be the ones either transporting horses or general stores.

Who were the Normans ?

At the beginning of the tenth century, the French King, Charles the Simple, had given some land in the North of France to a Viking chief named Rollo. He hoped that by giving the Vikings their own land in France they would stop attacking French realms. From there they would cultivate land, join the feudal economy, and be a source of manpower the king in times of warfare.

The Normans – Who Were the Normans?

15
In Viking combat, how much damage was done using the shield?
4
Why is Kubb - a skittles game - associated with the Viking Age?
3
Why did Danish people not "connect" with neighbor nations until Viking Age?
44
How did passengers keep warm on sail ships?
9
Why are there shields present on the sides of Henry VIII ships, did they serve any function or was it pure decoration?
2
How did Japanese small boats win against Mongolian ships?
7
In 18th century America, how did people board ships to travel long distance?