When and why was the 55th parallel established as an administrative boundary in Quebec?

I was looking at Canadian election maps, and noticed the Manicouagan riding had weird exclaves formed between the 55th parallel and the Quebec-Labrador provincial border. When extended to Hudson Bay, this line also serves as the southern boundary to Quebec's predominantly Inuit-inhabited Nunavik region (images below for reference).

The fact they are exclaves turned out to be fairly uninteresting – only the westernmost one appears inhabited and there's a rail connection to the south via Labrador.

However, while the interior is uninhabited, both ends of the parallel have points of interest related to various indigenous groups. On the eastern side, the exclave is inhabited in part by the Naskapi at Kawawachikamach. However, they have some reserved land north of the 55th and this may have contributed to them having a seat at the otherwise Inuit Kativik Regional Government (KRG) in Nunavik. On the western side, this appears to be a historical point of contact between the Cree and Inuit. In the modern day they now have settlements on either side of Great Whale River just north of the 55th at Whapmagoostui and Kuujjuarapik respectively.

As a result, I've been trying to trace the history of the 55th parallel and whether alternate boundaries were ever considered. Of interest is that the Manicouagan riding was created in 1966, so at least the eastern portion of the boundary seems to have existed in some form before negotiations between the governments of Quebec & Canada and the aforementioned groups in the late 1970s established the KRG. These agreements are now constitutionally guaranteed by s. 35 of the Constitution Act, 1982.

I hope I've given enough context for my interest, as my linked questions are: 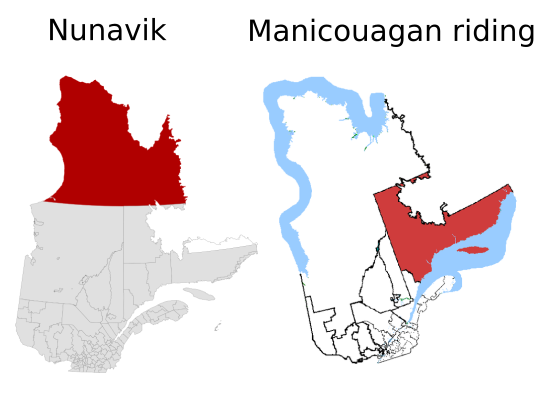 Not the answer you're looking for? Browse other questions tagged native-americans canada border quebec or ask your own question.

6
Were discrepancies from the 45th parallel in the US-Canadian border ratified?
10
Why is/was the world's expo 1967 so important to Montreal, Canada?
12
Why is the border between Myanmar and Thailand so long?
6
How and when did the border regime change when the USSR broke up?
2
Why were the Istein and Schliengen enclaves transferred from Switzerland to Baden?
3
Why was it deemed necessary that the “average person… knows they are on the border”, which resulted in the creation of the US-Canadian border slash?
3
When did the Ciboney arrive on Cuba and displace the Guanahatabey?
2
Why is the term "Ancestral Puebloans" used and not simply "Puebloans"?
10
What was the border regime between Poland and Czechoslovakia like during the 1970s and 1980s?