In what countries were plague doctor masks were most common?

The clothing worn by plague doctors was intended to protect them from airborne diseases during outbreaks of the Bubonic Plague in Europe.

However, the costume was worn by a comparatively small number of medieval and early modern physicians studying and treating plague patients

The Wikipedia article vaguely says Europe, and it also says that the costume, which includes the mask, I'm particularly interested in, was not widespread. The article also mentions France. Do we have any information in which countries the mask was most commonly seen? Is there anything after the use of the costume went out of fashion until modern days that could link the mask to popular culture of particular countries?

With "Italy and France" you already have your answer, with the needed addition "at a few times, and in a few regions". That is: if at all.

This type of gear became iconic in representations all over Europe, later, not in the medieval times. But its actual use was incredibly even more restricted in both time and space.

The figure of the plague doctor with the beak-like nose case has so far only been documented for the period after 1600 and even then only for the French and Italian regions. Its use for publications or exhibitions with a different temporal or regional reference must be rejected as historically unprovable.

The conclusion: the beak mask is not mentioned before the mid-seventeenth century, and then only in Italy and Southern France. There is no proof at all of its use during plague outbreaks in Middle Europe. And the specimens in Ingolstadt and Berlin? Both masks present details which suggest that they were not used as protective clothing at all. We do not know, however, if they were produced as replicas for historic reasons or as fakes for the modern art market.

Notice that the full-face beak-type has in pictures the eyes arranged in a way that is most impractical for a physician: if you cannot properly examine a patient, because you restrict your vision so severely: 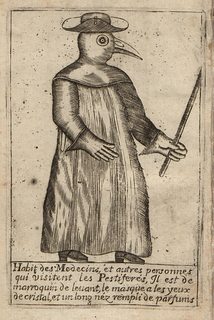 The area of stereoscopic and sharp vision is blocked by the construction: 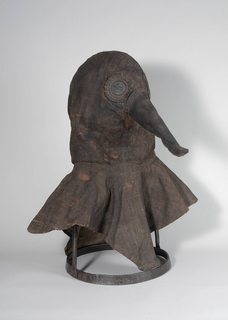 Also note that 'the beak' was only intended to ward off the bad smells (miasma), by affixing nice smells in front of the nose without the need for one hand to hold them there, as that was common. Other 'protections', like for eyes are less than secondary within that theoretical framework. Further, a sponge with good smells is much easier to wear, doesn't impede breathing or vision so much.

Why was this picture gaining so much popularity? One reason is that early on people used this icon as a means to ridicule and look down on those using them. The picture was heavily circulated with many versions probably originating predominantly from print shops in Nuremberg and Augsburg.

These were cities in which freedom from plague became a sign of a 'functioning state' and a 'functioning' health system in the 18th century. Thus they can also be understood as an instrument of political propaganda of the Upper German imperial cities: with constant repetition they transmitted a mental picture with very skewed statistics for 'typical'.

The rhetoric of discrimination, demarcation and superiority of this propaganda is still at work today, albeit with a changed target. Originally, the pamphlets with the motif of the beak doctor were circulated to emphasise the distinction between cities where they originated and the (supposedly worse functioning) southern European cities and their health administrations. Today, on the other hand, beak-masks serve the apparently widespread need to have an archetypical illustration — and to distinguish our "present" in its (supposed) superiority from an undefined, dark "before" when medicine is said to have been determined by superstition, magic and medical helplessness. Only that our health systems returned to magical thinking as well.

Nevertheless, there is no proof that these ‘plague-doctors with beak-like masks’ really existed.
— "The history and value of face masks", European Journal of Medical Research, 2020. doi

Despite its presumed association with healing, the plague mask’s presence (and by extension the plague physician’s presence) communicated death, disease, and suffering.

According to National Geographic the outfit (which includes the mask according to the photo in the link) was widespread throughout Europe, but most common in Italy.

Though plague doctors across Europe wore these outfits, the look was so iconic in Italy that the "plague doctor" became a staple of Italian commedia dell’arte and carnival celebrations—and is still a popular costume today. (Memories of the plague resonate in Venice during the coronavirus pandemic.)

Not the answer you're looking for? Browse other questions tagged europe medicine fashion or ask your own question.

1
What was the death toll of Plague of Justinian?
3
Did women in ancient Rome wear corsets, and if so, what were they made of?
14
In what European countries did non-hereditary nobility exist? (XVII-XIX centuries)
35
How common were marital duels in medieval Europe?
1
Why were French maids apparently so common outside France?
36
How literate were common people in Medieval Europe?