Were there duststorms in Louisiana in the 1930's?

According to the great dust bowl of the 1930s was a policy made disaster:

During the same April as Black Sunday, 1935, one of FDR's advisors, Hugh Hammond Bennett, was in Washington, DC, on his way to testify before Congress about the need for soil conservation legislation. A dust storm arrived in Washington all the way from the Great Plains. As a dusty gloom spread over the nation's capital and blotted out the sun, Bennett explained, "This, gentlemen, is what I have been talking about." Congress passed the Soil Conservation Act that same year.

If the dust from the Dust Bowl could blow through Washington D.C. in April, 1935, following Black Sunday of that month, it could certainly have blown through northern Louisiana a day or three earlier.

On a single day, April 14, 1935, known to history as Black Sunday, more dirt was displaced in the air (around 300 million tons) during a massive dust storm than was moved to build the Panama Canal.

Not so much no.

While its a common belief that this was an Oklahoma phenomena*, and the two states do nearly border, the serious issues with wind erosion and the associated dust storms were actually largely in an 6-state area centered on the panhandle in far western Oklahoma. In fact, Nebraska had bigger issues with dust storm erosion during that period than Louisiana.

Here's a map of the problem, created by the US Government: 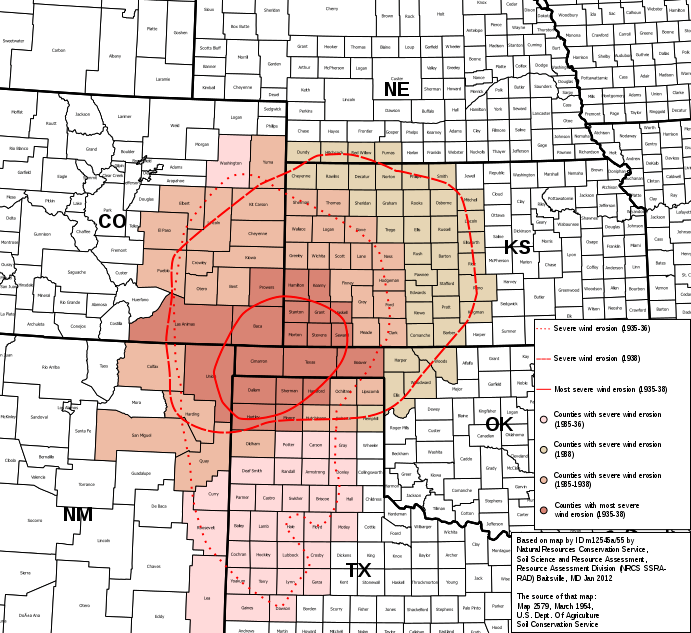 That being said, the dust clouds themselves were much more widspread than this, and in particular were active to the east/northeast of this area, as that's the direction storms move in that part of the country. Some were reportedly dropping plains dust on east coast cities.

However, Louisiana is to the Southeast of this entire area. Its certainly possible a weird wind may have gone that direction during a storm once or twice, but it wouldn't be the typical wind pattern, and I can't find any record of that happening.

* - Particularly in California, where the climate refugees were collectively called "Okies"

Not the answer you're looking for? Browse other questions tagged united-states geography 1930s great-depression or ask your own question.

31
Why did the French sell Louisiana?
6
Was the Stock Market Crash of 1929 a cause or result of the Great Depression?
4
What was the price of basic foodstuff in 1930 Poland?
9
Where could I find a map of the communes for Bavaria region before 1930?
3
During the Great Depression in America, was there an increase in popularity of Communism?
12
When did the last (non-tourist) commercial stagecoach line run in the USA?
6
What were the rules of the migration to the Louisiana Territory in USA?
3
What were the largest companies in the world before and after the Great Depression?
0
Were there hippies in the USA in 1930?