What made Fort Donelson particularly vulnerable to capture?

In February, 1862, Ulysses S. Grant captured Fort Donelson in a little over a day. Most forts hold out for "many" days, especially when the ratio of attacking to defending forces is less than two to one (as was the case here).

Except that Fort Donelson was apparently peculiarly vulnerable to capture. One obvious vulnerability was the presence of Union gunboats on the Tennessee River. Was this only important vulnerability or were there others?

With Grant leading the assault force, a rarity of competence among the generals on both sides: 100% chance of falling on the 16th or perhaps 17th.

With 16,000 men to defend a roughly 2 mile defensive perimeter, the Confederates were fielding 8000 men per mile. Despite numbers seemingly prophetic of World War 1 the fort succumbed on the second day of assault.

The truth is that Fort Donelson was woefully unprepared for an overland assault; doomed to fall quickly to any competent, determined, and aggressive assault. Think Singapore in February 1942. There was no fallback position from the outer perimeter except retreat into the fort proper combined with surrender (or as attempted unsuccessfully, breakout) by 80% of the defensive force; but even that buys, at best, only a few extra days.

General Simon Bolivar Buckner, however, argued that they were in a desperate position that was getting worse with the arrival of Union reinforcements. At their final council of war in the Dover Hotel at 1:30 a.m. on February 16, Buckner stated that if C.F. Smith attacked again, he could only hold for thirty minutes, and he estimated that the cost of defending the fort would be as high as a seventy-five percent casualty rate. Buckner's position finally carried the meeting. Any large-scale escape would be difficult. Most of the river transports were currently transporting wounded men to Nashville and would not return in time to evacuate the command. 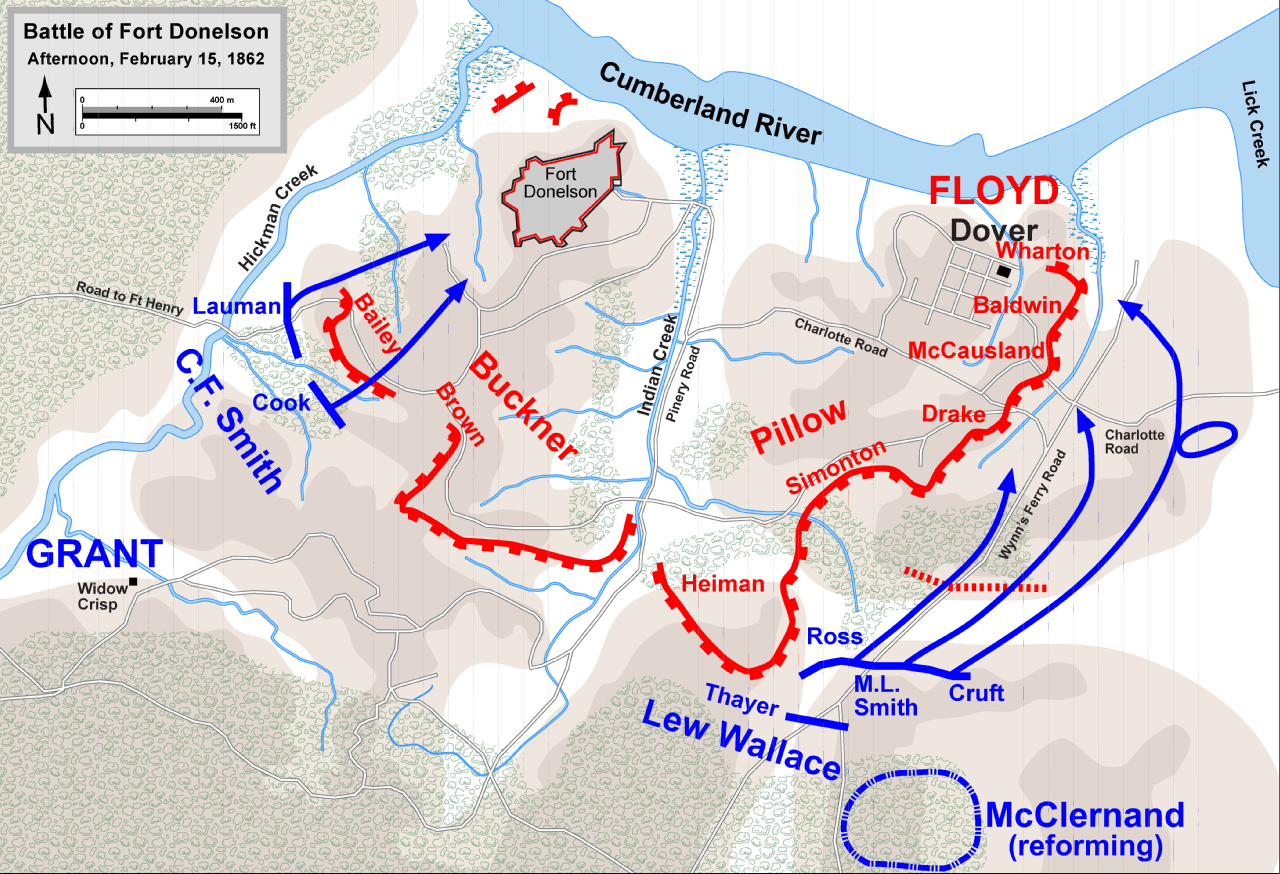 All meaningful land-facing defense of Donelson was encompassed in the assumption that Fort Henry wouldn't fall; with Henry itself having little in the way of land-facing defense. Although the Union wasn't big on that sort of thing: any Union commander at Fort Henry who didn't promptly capture Fort Donelson would have deserved court martial for cowardice in the face of the enemy.

Not the answer you're looking for? Browse other questions tagged military american-civil-war or ask your own question.

4
What type of defenses did the Pequot use at their fort?
4
How effective were siege guns and gun boats compared to field artillery in the 19th century?
8
Was the Confederacy (effectively) down to six states after the capture of Vicksburg?
3
What was this a buckle for?
2
Was an adobe fort or a palisade fort more defensible?
3
How to attack Fort Ross
9
Did Lincoln "usurp" his war powers?
8
Can anyone find "War Department General Order No. 207, 3 July 1863" in which "prisoner conduct after capture" was mentioned?
1
What were the manpower and gunnery levels of the seven gunboats that assisted Grant at Fort Donelson?