What was Michael Wittmann's "officer" chain of command like?

At Normandy, tank ace, Captain Michael Wittmann commanded a group of seven tanks. My understanding is that an officer of Wittmann's rank might command a unit of 9-15 tanks at full strength (before casualties).

Answers to one or two previous questions described Wittman's chain of command below tank commander. This one is about Wittmann's officer chain of command. Assuming that Captain Wittmann was commanding a company, , how many tanks would there be in a battalion commanded by a Major or Lieutenant Colenel, a regiment commanded by a Colonel, a division by a Major General, etc. all the way up to a Panzer leader like Heinz Guderian or Erwin Rommel? And of his seven-tank group, did he have an officer that was second in command, or the leader of a subgroup of two, three or four tanks?

Hitler made this clear in an August 17, 1938 decree. The SS was his, but he would loan it to the Wehrmacht.

The SS available troops [SS-VT, predecessor to the Waffen-SS] are neither part of the Wehrmacht nor the police. She is a standing armed force at my [Hitler's] exclusive disposal. In the event of war it should be used within the framework of the army or, if necessary, internally according to my instructions.

In times of war, the Waffen-SS could and was often placed under the operational control of the Wehrmacht as was done in August 19, 1938 in preparation for war with Czechoslovakia.

With immediate effect, the units of the SS available troops [SS-VT] will be placed under the command of the Wehrmacht. The Commander-in-Chief of the Army regulates their use according to the instructions I [Hitler] have given.

And on April 22, 1940 all armed forces of the SS were merged into the Waffen-SS.

On the orders of the RfSS [Reichfurher-SS], all SS units under arms are united in the Waffen-SS. The terms SS-Einsatzstruppe and SS-Totenkopfverbände are no longer to be used.

Waffen-SS units could be of non-German nationality. Italian, Russian, Hungarian, Croatian, even Dutch and French Waffen-SS divisions were raised.

If this seems redundant and wasteful, it is. Nazi Germany was designed to play various powerful groups against each other to keep Hitler in charge. The Waffen-SS gave Hitler a counter-balance against the Wehrmacht. They all ultimately answered to Hitler, and they had to rely on him to resolve their conflicts.

The 13th had 5 platoons of 5 Tiger Is each, plus a tank each for the company commander and HQ making 27 tanks. Platoons were lead by SS-Untersturmführers (SS-Junior Assault Leader) equivalent to a Wehrmacht Leutnant or Allied 2nd Lt. Michael Wittmann commanded 1st platoon. The lowest ranked tank commander would be an SS-Unterscharführer (SS-Junior squad leader) equivalent to a Unteroffizier or a US Sergeant.

After returning from the Eastern Front, the 13th was reorganized and reinforced into the 101st Heavy Tank Battalion of 3 tank companies of 3 platoons. Each platoon had 4 Tiger 1s. Each company HQ had 2 Tiger 1s. 14 tanks per company. Battalion HQ had 3. 45 Tiger 1s. On paper.

A heavy tank battalion would also have a staff company including engineer, recon, communications, and anti-aircraft platoons. A workshop company. And all the necessary vehicles: self-propelled anti-aircraft guns, half-tracks, recovery vehicles, motorcycles, staff cars, cranes, and lots of trucks. On paper.

Note that despite having 3 companies the 101st Heavy Tank Battalion had only twice the Tigers as the 13th Heavy Tank Company. Fewer platoons with fewer tanks. This thinning out of units to make formations seem more powerful was common practice in the late war German army.

At Villers-Bocage, Wittman's 2nd company was below 50% strength. Of the 14 paper Tigers, he had just 5 or 6 operational. Under-strength units were very common in the German military. His company had barely 25% of the tanks of his old 13th Heavy Tank Company. Normally he would have 3 platoons of 4 Tigers, but with so few it is likely he reorganized them into a single unit under his command. Such ad-hoc kampfgruppe were common in the German military.

Michael Wittmann, then an SS-Obersturmführer (SS-Senior assault leader, roughly a 1st Lieutenant), was given command of the 2nd company of the 101st. After Villers-Bocage he was promoted to Hauptsturmführer (head assault leader) of the Waffen-SS after, equivalent to a Wehrmacht Hauptmann or a US Army Captain. See Ranks and Insignia of the SS for comparisons. Hauptsturmführer is an appropriate rank for a company commander. Obersturmführer was a little low, possibly reflecting his previous post as a platoon leader.

As a Waffen-SS officer he was an officer of the SS and the Nazi Party, not the Wehrmacht. However, his superiors could be placed under Wehrmacht command.

The 101st was commanded by SS-Obersturmbannführer (SS-Senior assault unit leader) Heinz von Westernhagen, roughly equivalent to a Oberstleutnant or Lieutenant Colonel two ranks above Wittman. This is the appropriate rank for a battalion commander.

When von Westernhagen was wounded, Wittmann assumed command of the battalion.

Normally a battalion would be attached to a regiment and the regiment attached to a division, the division to an army, and so on. But the 101st was an independent battalion under the direct command of the I.SS-Panzerkorps (1st SS Tank Corps) to be used as the corps commander saw fit. It was the corps' reserve.

1st SS Tank Corps was commanded by SS-Oberst-Gruppenführer und Generaloberst der Waffen-SS (SS-Supreme group leader and colonel general of the Waffen-SS) Josef "Sepp" Dietrich equivalent to a Generaloberst or a 4-star US General. This is the highest commissioned rank in the SS. Normally a corps commander would be a rank lower, a Lieutenant General, but at the time a corps was the largest SS formation and the 1st SS Tank Corps was the most powerful. It would not be until the formation of the 6. Panzerarmee (6th SS Tank Army) for the Battle of the Bulge, also commanded by Dietrich.

Normally Dietrich would be subordinate only to Reichsführer-SS Heinrich Himmler who in turn answered only to Hitler. But at the time of Villers-Bocage the 1st SS Tank Corps was attached to Panzergruppe West (Panzer Group West) of the Heer (Wehrmacht army) commanded by General der Panzertruppe (Lt. General) Leo Freiherr Geyr von Schweppenburg. On June 10th he was wounded when his HQ was attacked and operational command was taken over by Sepp Dietrich.

Panzer Group West would normally be under the control of OBW (Oberbefehlshaber West / "High Commander in the West") Generalfeldmarschall von Rundstedt. OBW was under OKW (Oberkommando der Wehrmacht / High Command of the Armed Forces (but only the Wehrmacht)) Generalfeldmarschall Kietel. OKW reported to Führer und Reichskanzler, Hitler. But at the time of the Normandy landings, Hitler had taken direct control of Panzer Group West. Not even OKW could direct them without Hitler's say so. 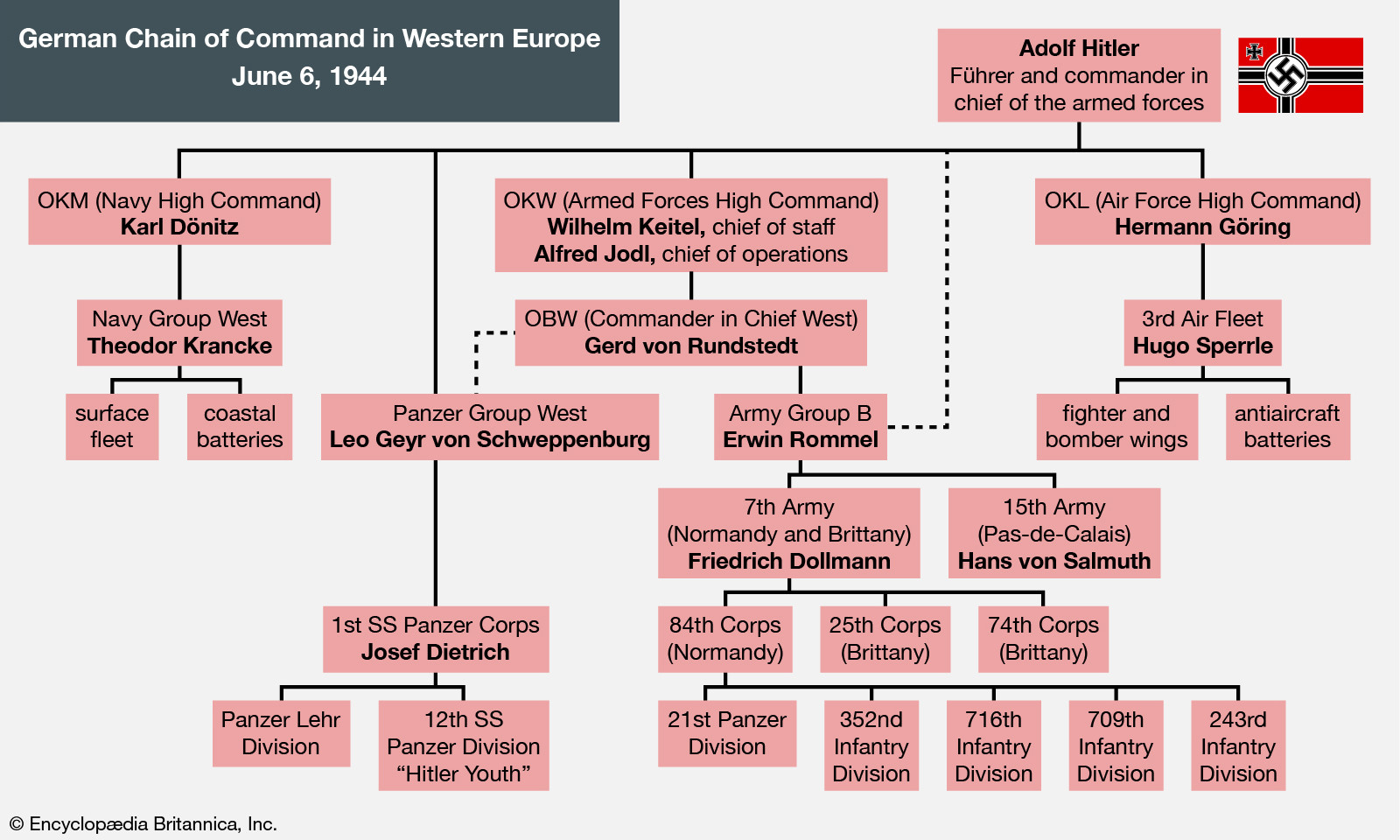 You may notice that while the Luftwaffe (Air Force) and Kriegsmarine (Navy) are subordinate to their respective high commands, OKL and OKM, the Heer (Army) units are not subordinate to OKH. They are subordinate to OKW, Wehrmacht High Command. You may also notice that neither OKW nor OBW (the supposed "High Commander in the West") control the Luftwaffe nor Kriegsmarine units in the West, they only control the Heer. In practice, OKH (directly commanded by Hitler) ran the Heer in the East, OKW ran the Heer in the West, and the OKL and OKM answered directly to Hitler. This fragmented and confused chain of command would hamper German strategic coordination.

So at Villers-Bocage, Wittmann's chain of command was...

First of all, you must understand that Waffen SS was part of Deutsche Wehrmacht, i.e. German armed forces. This is important for various reasons, not at least legalistic i.e. members of Waffen SS were "legal" combatants in a sense they represented armed forces of their state (Third Reich) and were not Francs-tireurs. Germans payed a lot of attention to these details, especially since they considered various guerilla groups during WW2 as illegal combatants and often shoot them summarily when captured some of them. What Waffen SS was not is being part of Deutsches Heer (German Army) , although operationally and strategically Waffen SS units were placed under control of higher Heer commands, as was the case with unit in question (Schwere SS-Panzerabteilung 101). Note that same principle (theoretically not part of the Heer, practically under their command) happened to Deutscher Volkssturm Wehrmacht. To avoid being "illegal combatants" they were also part of the Wehrmacht.

In any case, most of the German heavy tanks (i.e. Tigers I or II) in WW2 were not part of panzer divisions. Instead, they were grouped into heavy tank batallions. These battalions (10 or 11 Heer, 3 or 4 Waffen SS ) were intended to be self-sustained elite units that would be attached directly to Corps or even Army level command. In rare occurrences they could be temporarily attached to a division, but usually would be sent to most critical parts of front, to be used either offensively or defensively (latter being almost a rule later in the war) . This was also a case with Wittman's 101st SS, as it was subordinated to I SS Panzer Corps but jointly with them was part of 5th Panzer Army (at that time known as Panzer Group West).

In theory, Waffen-SS and Heer not only had different ranks and uniforms, they also had different esprit de corps, even training and general discipline. For example, in Waffen SS superiors were addressed just with rank without usual "Herr" as in Wehrmacht. Nevertheless, in practice during the war, many such formalities were abandoned for the sake of efficiency. During the war, especially in later parts, Germans rarely had full authorized complement of equipment actually present in an unit. Combat groups (Kampfgruppe), ad-hoc formations formed on battlefield, were usual modus operandi. This was the case in time of Wittmann's death. Per regulations, he as a company commander would take orders from his battalion commander ( Heinz von Westernhagen ). But at the time von Westernhagen was on convalescence leave, and what was left of the battalion was under direct command of Wittmann. Therefore, at the time of his death he would receive orders directly from corps HQ. Since Wittmann actually had fewer operational tanks then one full company, this looks a bit silly (corps issuing commands to two platoons of tanks), but that was German situation in later parts of the war.

What would have changed if Wittmann served in Heer heavy tank battalion ? Well, practically nothing. As said before, these too were attached directly to corps or even army level commands. They too suffered lack of equipment, especially if serving for prolonged times at certain "hot" part of the front. And they too often employed ad hoc Kampfgruppe formations to command remnants of their forces .

1
What were the ranks of say, the five crewmen of a Panzer in World War II?

16
Why was Johannes Blaskowitz indicted at the Nuremberg High Command Trial
29
What was Hitler like in private?
9
Was the Flakpanzer IV used against infantry? If not, what was?
6
What was American anti-tank doctrine during WWII on paper, and how did it differ from in practice?
9
What was it like for German Jews after WWII?
3
What rank was second in command on a U-boat?
5
Was Romania under German command during WWII?
0
What was the average age of tank crews, in particular commanders, in WW2?