Where can I find the original Arabic version of bin Laden's 1996 fatwa?

For a paper in my Arabic class, I would like to cite from bin Laden's 1996 fatwa "إعلان الحرب ضد الأمريكيين الذين يحتلون أرض الحرمين الشريفين"

It would be a little strange to take an English translation and translate back to the original but I can't find the latter; can someone provide tips on how to get it?

At the 'Combating Terrorism' site at West Point we find:

This document is a declaration of war issued by Usama bin Laden and al-Qa`ida against the United States and the Saudi Arabia regime.

— "Declaration of Jihad against the Americans Occupying the Land of the Two Holiest Sites", Reference Number: AFGP-2002-003676

Presenting both an English translation and a supposedly original, in Arabic, PDF. 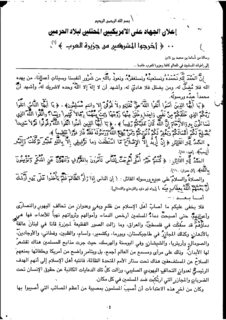 Declaration of Jihad against the Americans — 1. On August 23,1996, a fax was sent from the mountains of the Hindu Kush, in Afghanistan, to several Arab newspapers. It was signed as follows:

“A message from Osama Bin Laden to his Muslim brothers worldwide, and in the Arabian Peninsula in particular, dated Friday, April 9, 1417 / August 23, 1996. From the mountains of the Hindu Kush, Khorasan, Afghanistan.”

Not the answer you're looking for? Browse other questions tagged middle-east sources islamic-history terrorism or ask your own question.

2
History of the Levant and Israel - 2000 BCE to the bronze age collapse - where to find info?
6
Where can I get information used to make Soviet economic plans?
5
Where did the names of these Tyrian kings come from?
3
Where can I find this paper by Jean Buridan?
5
Can anyone render this passage from Lorenzo Valla's original Latin translation of Herodotus into modern text?
4
Where to find Cixi‘s 1865 decree dismissing Prince Gong?
2
Where can I obtain the full "British Statistical Blue Books" of British colonies in Africa?
23
What is the origin of the names of planets in Arabic?