Apparently some WWII-era bombs had whistles built into their design, so that they would whistle as they fell. Often, for example in Looney Tunes cartoons, this is depicted as a whistle that gradually lowers in pitch until it hits the ground. (See this recent question at movies.SE.) My question is whether this is accurate, or if the real sound was different.

In various web pages on the topic, I often see the claim that the person on the plane would hear a lowering pitch like we hear in cartoons, while people on the ground would hear a raising pitch, due to the Doppler effect. However, I haven't seen a reliable source for this claim, and it doesn't seem all that likely to me. This is partly because I doubt the bombers could have heard the bombs at all over the sound of the plane, but also because if the bomb is falling at its terminal velocity then a person on the ground should hear a drop in pitch, unless they are directly underneath the bomb and about to be hit by it.

The reason for this is that, for a person on the ground some distance from where the bomb hits, the bomb is initially almost overhead and moving almost towards the listener. This means that the Doppler effect increases its pitch. However, by the time it hits the ground it is moving perpendicular to the listener, with no component of its velocity toward them, so the doppler effect will not increase its pitch any more. The situation is quite similar to a person being passed by an ambulance at ground level - a smooth drop in pitch is heard as the vehicle passes. For a bomb falling at a constant speed the listener should hear a high tone that smoothly drops in pitch, with the drop in pitch being at its fastest at the moment the bomb hits the ground. This is quite close to what we hear in movies and cartoons.

On the other hand, a raising pitch would be heard if the bomb was still accelerating as it fell toward the listener, and there might be other reasons why the sound would be different from what I described above.

Because of this, I'm interested in knowing what it actually sounded like, preferably via first-hand accounts from people who witnessed bombs being dropped in that era. I'm mostly interested in what it sounded like for people on the ground, but if it's also known how it sounded from the planes (if it was audible at all), that would be interesting too.

These optional gadgets were like organ pipes and sounded like them, plus the acoustic effects the question explains. But the sound as such may also be produced just by the stabiliser fins alone. When the organ pipes are fitted, this is called a screaming bomb. 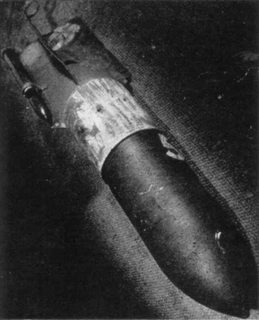 a form of physiological warfare, small whistles called Jericho Devices or Jericho whistles could be attached to the tail of SC/SD 50 and SC 250 Bombs. These would produce the loud, characteristic bomb whistle noise when falling to reduce morale. Similar to the well know “Jericho Trumpets”, the sirens attached to the landing gear of the Stuka.

There whistles were attached in pairs of 4 on the tail of the bomb, opposite of each other.

A pamphlet, “Civil Defence Training Pamphlet No 2: Objects Dropped From The Air”, Issued by the British Ministry of Home Security in 1944, describes two types of flutes; One is described as a “black cardboard tube, shaped like an organ pipe”, and the other as “an adapted bayonet scabbard, with an attachment for fastening it to one of the vanes of the bomb.”

One type is a black cardboard tube, shaped like an organ pipe. The other model is an adapted bayonet scabbard, with an attachment for fastening it to one of the vanes of the bomb. Both models are approximately 14 in. in length and 1 1/2 in. in diameter, the vent being about 4 in. from the closed end, which is rounded. Owing to the mechanical weakness, the former often breaks in two at the vent and the parts may be found separately.

In the second type, the body of the pipe is sometimes a hollow sheet-metal tube, spot welded in two seams down the side, with a wooden nose secured to the tongue of the metal tube by two nails. (Note: 1-kg. incendiary bombs have also been found fixed to the vanes of a 50-kg. H.E. bomb by clips.)

A recording with the sound from the pilots perspective is at Why did World War 2 bombs made whistling sound while they fell ?

Not the answer you're looking for? Browse other questions tagged world-war-two 20th-century weapons aircraft or ask your own question.

67
Did World War II-era bombs actually whistle?
78
Why, in the US, is Japanese brutality ignored compared with the Nazi brutality in WW2?
2
How far away could zeppelins drop bombs?
111
On 1941 Dec 7, could Japan have targeted the Panama Canal instead of Pearl Harbor in a surprise attack?
8
What did General McAuliffe actually say at Bastogne?
5
When did enscribing messages on bombs first happen?
10
How much time did people have to take shelter during the Blitz in 1940-41?
44
What is the logic for the map maker classifying the map this way, specifically in Canada?
9
What WWII fighter raid did my great-uncle misremember?