Why did Lübeck not have colonies like other strong city-states?

Why did Lübeck not have colonies, far away trading-posts or even more land like other strong city-states? They had a big fleet and a big army as well.

For example the city-state of Venice was rich on trade just like Lübeck. They took more land in Northern Italy, also they had colonies and trading-post like the island of Cypress and Crete. For some reason that's not the case for Lübeck.

Here is a map that shows the land of Lübeck (Yellow).

Lübeck was not a peaceful state with no foreign ambitions. They set in motion the Count's Feud in Denmark 1534-1536 and were eager to control the strait between Denmark and Scania (today Sweden). They used their fleet and their soldiers in that war. 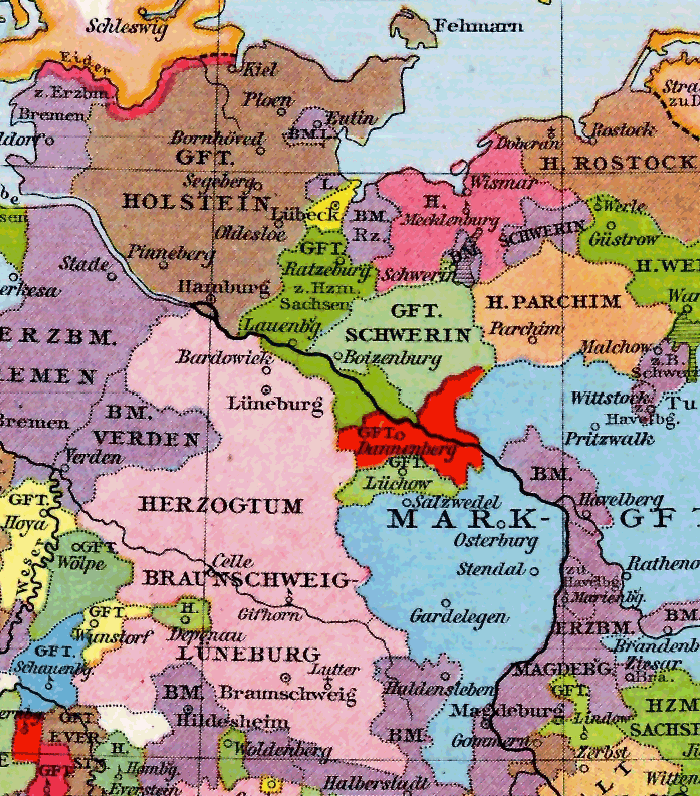 The answer lies in the geographic and political situation of the Baltic Sea.

First, geography is a major factor: Take a Mercator map and loop at Europe: you'll ask your question. Now take a terrestrial globe. You'll notice that the Mediterranean Sea is bigger than the Baltic Sea. It has more and bigger islands. Now, add to this fact the fact that all the North of Baltic Sea, stuck between today's Sweden and Finland, could not be successfully used during the Midle Age. By that time, the Northern extremity of Europe was the island of Gotland. In today's Germany, land was not "free" as in Balkans for Venice, it was already occupied and under the Holy Roman Empire, that would not be in favour of war between its cities: if Lubeck had attacked, everyone would have coalized against Lubeck. So overall, there was no room for colonies nor territories.

Second factor, the political situation saw the Hanseatic League: a league of cities such as Lubeck that organized themselves for trade with other cities or countries. They used their commercial power and treaties to ensure advantages for their merchants in foreing cities, creating multiple commercial posts similar to Venitian ones in Egypt, Constantinople or the Holy Land. Again, territories in England, France or Dutch were occupied and Lubeck had no room for colonies. This idea of "room for" is not only about military strength, but also about political situation: it was easier for Venice to conquer Muslim or Byzantine held territories than for Lubeck to fight other Christian territories.

Then of course Lubeck could have "tried" and sail to Greenland, that Vikings had talked about, or even America. But this was far more risky than going to Creete or Cypress for Venice.

Without absolutely necessary clarifications within the questions framing, the simple explanation may be a bit difficult to swallow: as phrased currently, the question is just based on unfounded assumptions that, as wrong headed as they are, cannot lead to an explanation for intricacies of the commonalities and differences between the histories of Lübeck compared to Venice.

The most basic wrong premise here is that one central assumption needs to be questioned as a valid axiom. Before asking 'why Lübeck did not have …' we need to ask whether that assertion 'it did not have' is anywhere true at all.

Without clarification on terms used, timeframe inquired about, it turns out to be in all probability 'not true' in the first place:

German urban colonisation owed much to Lübeck's enterprise, and many of the towns to the east of the Elbe had arisen more or less as Lübeck's colonies.

Not the answer you're looking for? Browse other questions tagged warfare trade political-geography or ask your own question.

20
Why was gold so popular and valuable back when it did not have many real world uses?
7
Why did the line infantry not use shields in the 18th century?
13
In the 18th c., did/would China accept gold from Europe as trade payment? Why / why not?
1
Did Japan ever attack Vladivostok in WW2? Why or why not?
3
Why did the Chinese not use military power to force out early Portuguese, Dutch and English trade encroachments?
9
Were there any well-established land trade routes in the US colonies around 1700? What did they look like?