China is a very ethnic homogenous country, one ethnic group, the Han make up 92 % of China's population.

Huaxia refers to a confederation of tribes—living along the Yellow River—who were the ancestors of what later became the Han ethnic group in China. During the Warring States (475–221 BCE), the self-awareness of the Huaxia identity developed and took hold in ancient China. Initially, Huaxia defined mainly a civilized society that was distinct and stood in contrast to what was perceived as the barbaric peoples around them. (1)

Looking at a map of the warring states: 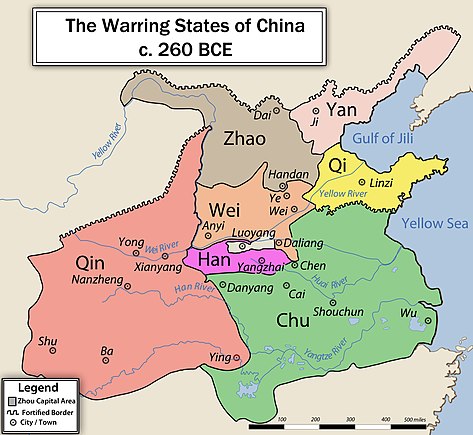 I found this that may shed some light on the matter: "The distinction between Huá and Yí also known as Sino–barbarian dichotomy, is a historical Chinese concept that differentiated a culturally defined "China" (called Huá, Huaxia or Xià) from cultural or ethnic outsiders (Yí, conventionally "barbarians"). The Hua–Yi distinction asserted Chinese superiority, but implied that outsiders could become Hua by adopting Chinese values and customs." (2)

"The conclusion of the Warring States period brought the first unified Chinese state—established by the Qin dynasty in 221 BCE—who established the imperial system and forcibly standardized the traditional Chinese script, leading to the first of the distinctions between the 'refined' Huà and the increasingly marginalised Yí. The Han dynasty (221 BCE–206 CE) further contributed to the divide with its creation of a persistent Han ethnocultural identity." (2)

So it seems that the Qin state was also populated by Han chinese?

There are a few ways to see this. Firstly, there are several major language groups, including Mandarin (920 million speakers), Jin (63 million), Wu (80 million), Yue (84 million), Gan (22 million), Xiang (38 million), Hakka (50 million), Min (30 million), and many others. Note that these are language groups, so Mandarin is a group sort of like the "Romance Languages" (French, Spanish, Portuguese, Italian, Romanian) in Europe; except bigger and more diverse. Note that Europe also used to be more linguistically diverse than it is now, but over the past 200 years this has decreased due to national pressures.

Let's take the language group Min Chinese, which has 30 million speakers, as an example. Here is a map from Wikipedia of places where people speak various Min dialects: 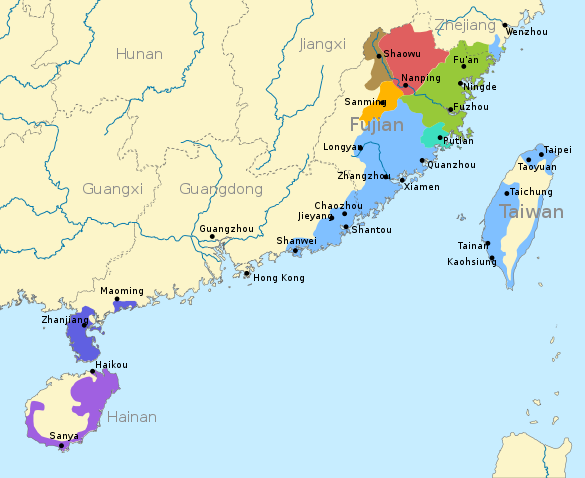 Notice that on this map, Fuzhou, a huge city about the size of New York, is in the green zone, and people there speak "Min Dong". Xiamen, another large city, is in the blue zone where people speak "Min Nan". Interestingly, speakers of Min Dong and Min Nan will not understand each other; they are completely different languages. For example, in this quora post one user says

As a speaker of Teochew (and Mandarin), I often heard Fuzhounese in NYC's Chinatown. I recall trying to understand what they were saying and trying to make out words. For the most part I didn't hear anything intelligible to me, save a few Mandarin or English words here or there.

Another user in that same post says that even Min Nan isn't a single language,

Even among Minnan “dialect”-groups (ex. Hokkien: Quanzhou, Zhangzhou, and Xiamen; Teochew: Chaoyang, Jieyang, Chaozhou) there is a diverse variety of different “accents”—which in English, would be considered a ‘dialect’—many have varying levels of intelligibility with one another, without mention of the completely separate language of Min-dong.

All the comments in that post are really interesting, and I enjoyed reading the whole thing to know just how much I don't know about Chinese languages.

It is often said that if one travels 100 miles inside China, there will be a different language. Thus, to facilitate communication, everyone also learns Putonghua or "Standard Beijing Mandarin", which is a language the CCP established based on the Beijing dialect. It is the language most Americans call Mandarin, which just happens to have the same name as the language group.

In Europe, when you travel to a place where people speak a different language, they will also have different customs and cultures. China is like this too. Thus, in my opinion, China has tons of cultures.

However, members of these cultures don't have much "nationalism" for their local culture. People will be proud of their hometown, and their province, and their local language. But generally, people identify themselves as Chinese and Han before they think about their regional identity.

When did people begin to identify as a "Han" ethnicity? This is a controversial question with many nuances.

Answer 1: Sometime between the first opium war in 1839 and the victory of the CCP in 1948. Note that Chinese people before 1912 were not Chinese, they were "Subjects of the Qing Emperor". The rise of nationalism and national identify were very important in the modernization of China. For example, read about the boxer rebellion and the May fourth movement. These are important turning points in "Chinese" nationalism and the rise of the Chinese state. Chinese nationalism can very easily be conflated with "Han" nationalism.

Answer 2: About 5,000 or more years ago. This continental syle identity arose as the culture that came to dominate East Asia. In this view, all the states in the Warring State's period consisted of Han Chinese people. However, in addition to being Han, they also had allegiance to their own Kingdoms. This is like a European also being French. Note that there was a "Han" empire from 200 BC to 200 AD. It would be sorta like Europeans identifying as "Roman".

Answer 3: The real answer to this question "When and how did the Han ethnic group become by far the biggest ethnic group in China?" is "now". Nationalism and ethnic identity are continually changing as people live their lives. Regional identities didn't arise in China as they did in Europe. In 1950, the CCP by decree redefined a set of ethnic identities, so that when people were responding to a census performed by the CCP government, and people choose their ethnic group from a multiple choice list. However, the CCP did not invent the identity "Han"; it was an identity that many people historically had.

28
Great Wall of China Controversy
14
When was tofu invented? Was it specifically for vegetarian consumption from the beginning?
4
Why were the populous coastal areas of China not linguistically united?
7
When the Chinese were driven out of modern Vietnam in AD 938, did an Vietnamese ethnic identity already exist?
11
When did Northern India and N. China begin to dominate in global demographics?
4
Why did China begin persecuting Falun Gong after tolerating the movement for nearly a decade?
8
What was the de facto rule by which the imperial title was transmitted in various Chinese dynasties?
3
What in Confucianism reduced the importance of the clan structure and made these societies more secular?
4
Why is it said that the Qin dynasty was the first to unite China?