Where can I find more information about destruction of a castle in Merlas, France?

On approximately the 21st of June 1944, some German troops burned a "castle" (not an historical one, built just before 1900) in the commune of Merlas (Isère), in the south-east of France.

This building is nowadays still a ruin, located near the village of Saint-Sixte. There are two images (before / after) in Wikimedia Commons.

I have only found very little serious information about this. In particular, I do not know of any published account. I wonder what would be a good strategy to find further details.

Is there a way to find some information about this event in the Wehrmacht archives?

I also had the idea to build a 3D model. Any good advice about this second point? I know the architect's name, and the web provides photos under various angles.

The chateau at Saint-Sixte was attacked by the Germans because it was being used by a local French resistance (Maquis) group as a hideout and base of operations in the Isere department of the region of Auvergne-Rhône-Alpes, Vichy France. The resistance group at Saint-Sixte (called 'Azur') was one several set up in the region, with resistance participation boosted by the introduction of the Service du travail obligatoire in mid 1942.

The French Wikipedia articles on Lac de Saint-Sixte and Merlas have some of the details, but a more complete account can be found on the French site Le Maitron. Below is a translation of this French source, the original of which can be viewed here.

A group called "Azur" and led by Élysée Billon-Laroute, who was to become mayor of Merlas on August 26, 1944, was set up in the sector of Saint-Sixte, a hamlet in the municipality of Merlas, which came under sector 2 of AS-Isère. In April 1944, the movement received arms by parachuting from the Allies. The resistance fighters were lodged in a 19th century pleasure castle, Château Descours [aka Chateau Saint-Sixte].

On June 21, 1944, German troops, having been informed of the presence of the French group at Château Descours, which they considered to be the headquarters of the Resistance, arrived by truck in Saint-Sixte early in the morning.

The castle was attacked and the guerrillas, outnumbered and insufficiently armed, quickly realized that their position was untenable. The resistance group fell back and two men tried to force their way out on a motorbike: Roland Tardy and Fernand Mathieu , one of the two being injured. 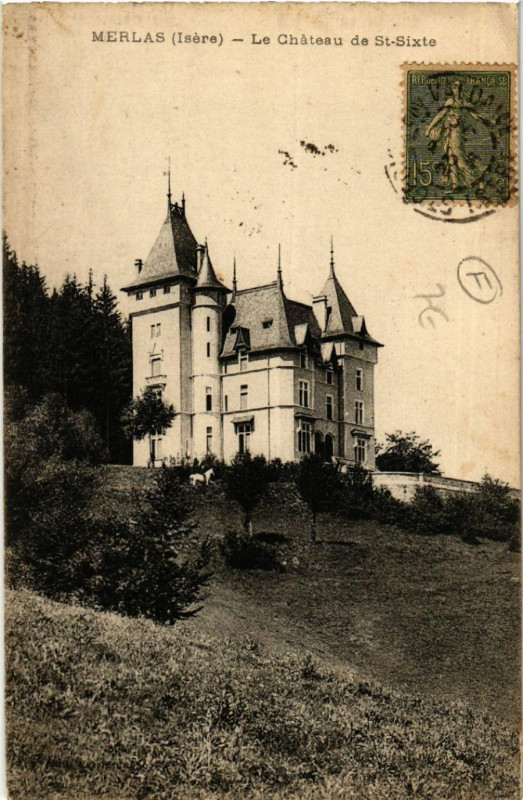 The castle before the war. Image source: Cartorum

What happened to those left at the castle is not stated but they were almost certainly killed (see below for a source on this), which is what happened to the two who fled, Tardy and Mathieu:

They were stopped some distance from the castle, on the road between Saint-Sixte and Merlas. Led into the courtyard of the factory at a place called "Nouvelière", they were summarily executed and their bodies thrown into a meadow. Descours castle and its outbuildings were burnt down.

In 1956, Tardy's name (misspelt?) was included on the memorial plaque shown below. 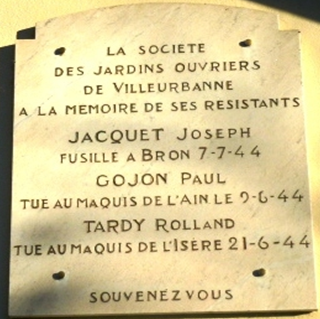 The Le Maitron site also has a page for Fernand Mathieu which seems to give a different place of execution, though still within the village of Saint-Sixte.

More details on the history of the castle (with lots of photos of the ruins) can be found at Le château abandonné de Saint Sixte (this blog has been somewhat cobbled together and contains errors which are corrected further down in comments by a descendant of the original owner). One of the comments notes that, according to the Town Hall, the Maquis who were in the castle when the Germans attacked died in the fire (Tardy and Mathieu excepted of course).

On German sources, I have not come across any of these. This may well be because, according to the Bundesarchiv website,

The collections from the period up to 1945 have suffered considerable losses due to the effects of war. The documents of the central offices of the Wehrmacht and the army command, of the services and the troops of the army below division level as well as of the air force and the Waffen SS are largely lost.

The Le Maitron articles, though, got some their information from archives at the Centre historique des archives at Vincennes, the Archives du département du Rhône et de la métropole de Lyon and La Division des Archives des Victimes des Conflits Contemporains at Caen. As to building a 3D, this seems beyond the scope of History SE but the sources linked here have quite a few pictures to help get you started.

Not the answer you're looking for? Browse other questions tagged world-war-two nazi-germany france building 1940s or ask your own question.