What engineers chose the locations and oversaw runway construction for the airfields that the Flying Tigers used?

The section of NPR's The Flying Tigers: How a group of Americans ended up fighting for China in WW II includes the following:

The AVG's base was in Kunming in southwestern China, far from areas under Japanese occupation.

There was a hitch to being there, however — no runways to land planes.

So thousands of Chinese built them by hand. "The Chinese people — the peasants, the working class people in particular, also — volunteered to help to build those runways and airports and also provide services to the American pilots," Tam tells NPR. "They didn't have any tools, modern tools. They used their bare hands, actually, to build those runways."

Meanwhile, the Americans did some training at a British airfield in Burma, the country now called Myanmar.

Their early training was not particularly successful. The pilots had far less experience than Chennault had wanted. Three pilots died and planes and equipment were damaged in various accidents.

There must have been a process by which the locations for these runways were selected for both logistical reasons and for suitability as a location for a runway (flatness, possibility of being made smooth, local weather and winds, etc.) and for the design and layout of the runway itself, including its direction with respect to prevailing winds and the safety and suitability of the directions of approach.

Question: What engineers chose the locations and oversaw runway construction for the airfields that the Flying Tigers used?

They could have been potentially Chinese, Burmese, American or British or some combination thereof, but presumably the engineering effort was overseen by some well-defined subset.

The journal Army History has a fairly lengthy article, The Construction of US Army Airfields in China during World War 2, by Raymond E. Bell Jr. It mentions the airbase at Kunming your article discusses, as well as several individuals involved in the airbase engineering throughout the war:

No specific individuals mentioned there, however, and Kunming may have been before some of the following individuals got involved. This mention definitely concerned Kunming though:

On 4 July 1942 1st Lt Francis C. Card established the engineer section of the Army's Advance Section Service of Supply SOS in China the section's sole member Card set work to have the Chinese improve Kunming airfield while at the time he planned for new fields near the city

...At the same time the involvement of US Army engineers in the actual business of construction was minimal They performed no manual labor but rather designed the fields and provided overall supervision of the work It was not until early in 1944 however before there was the beginning of a comprehensive Army engineer design and supervisory framework to oversee construction During this time frame SOS Advance Sections 3 and 4 were transferred to Chennault's control The work fell to the 5308th Air Service Area Command with Col Henry A Byroade assigned as project engineer The area command organized three districts one encompassing the many airfields around Kunming one constructing B 29 airfields for the Twentieth Air Force at Cheng tu and the third constructing fields for the Fourteenth Air Force in eastern China

Another officer is also mentioned:

One of the few US Army officers involved in supervising the construction of air bases in eastern China was Capt Robert Belknap. Initially involved petroleum delivery construction India he was one of the officers out of Burma with Stilwell in March 1942 Eventually was charged with fuel resource distribution to the Chinese under the lend lease program As an Army engineer however he helped with the some thirteen airfields in China all of which but one eventually fell to the Japanese in their 1944 1945 ground offensive

The article goes on for several pages and even has a grainy image of the laborers working on one of the airfields. 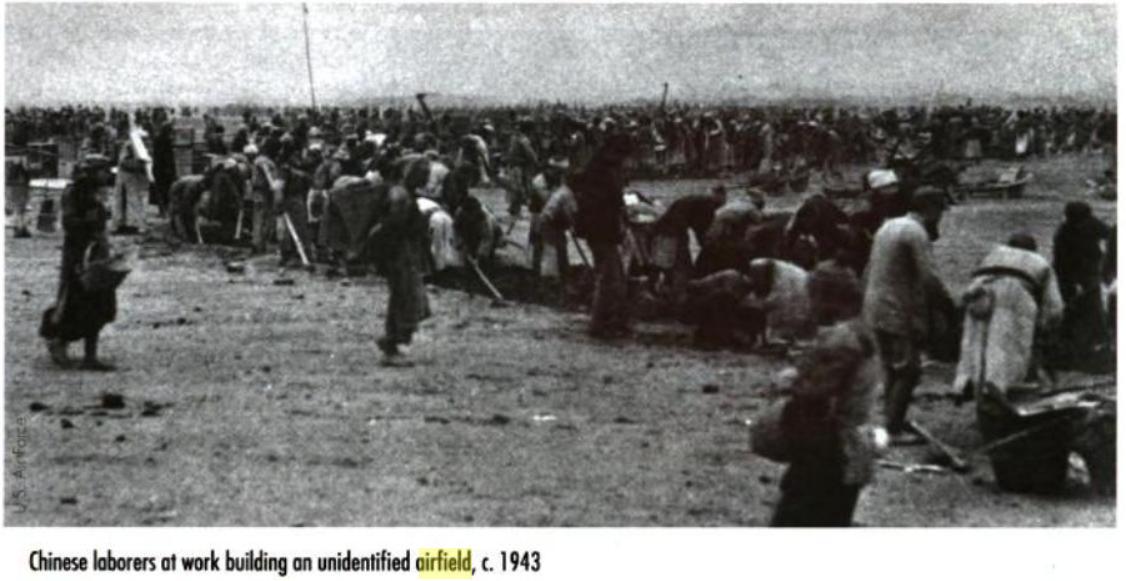 Not the answer you're looking for? Browse other questions tagged world-war-two military china aircraft myanmar or ask your own question.

4
What does the forward "Bullnose" of a Bailey Bridge that is under construction look like?
21
Why did the German air force lose experienced pilots faster than the Allies, even though they were defending their home airspace?
17
How did the Japanese treat captured "Flying Tigers" in World War II?
0
What was the actual dispute that triggered the March 2013 anti-Muslim riots in Myanmar?
2
How many RAF and USAAF/USAF airfields were built in the UK between the mid-1930s and 1960?
0
What quality were Japanese troops in Japan in 1945?
1
What were common crew ranks on US Navy flying boats and bombers?
8
Did any of the Flying Tigers lead a US Navy squadron?
9
What WWII fighter raid did my great-uncle misremember?
3
During the WWII, did the German Luftwaffe ever have mixed units of Bf-109s and Me-262s, and if so, which units and/or which airfields?