Why do the bases of these pillars have grooves in them?

While exploring the ruins of the city of Perga we saw many things that looked like this: 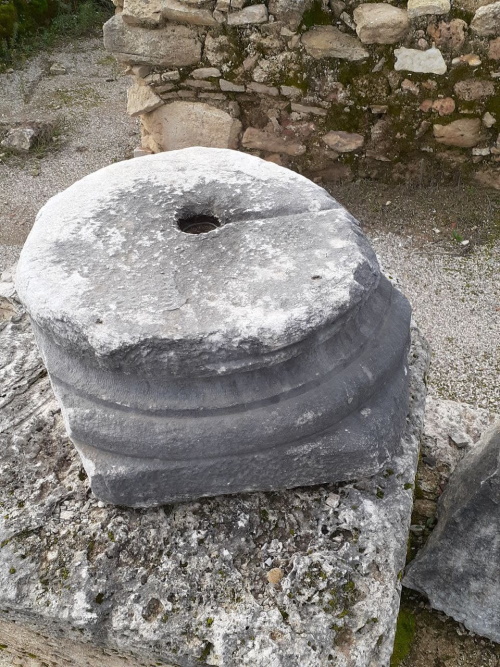 It looks like the base of a column (though maybe it is a capital?). I am curious why there is a radial groove running from the hole in the center to the edge.

An article in the book Master Builders of Byzantium by Robert Ousterhout discussing the construction of Greek and Roman columns confirmed my suspicions from comments above: 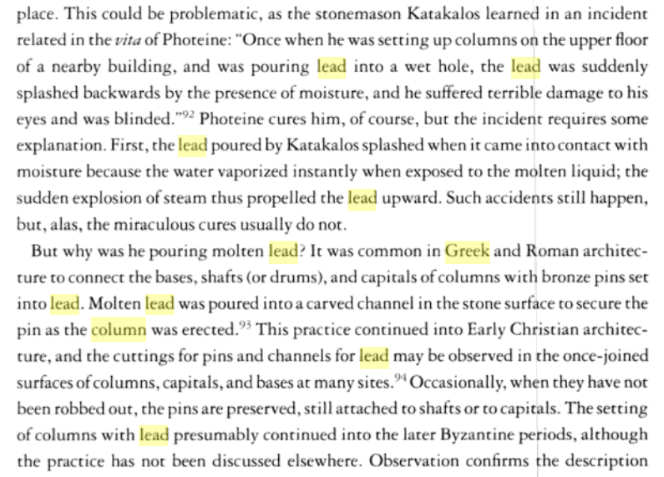 So the channel in the stone allowed hot lead to be poured into the section to secure the pin which would connect the base to the next section of column.

There seems to be some confusion, so I will speculate once again on the possible process involved.

The pin would be set tightly in the upper section, either driven into a more precise hole or set in lead at an earlier time. (Note this could be done in the open, so this side would not require a channel, thus matching one of the images pointed out in comments-it's an upper section).Then that section, with the pin installed, would be lowered into the open, oversized hole in the lower piece. This would allow the column section to be adjusted to flush the sides as best as possible. Then when the pieces are properly aligned, the lead is poured in from the side into the bottom hole, finishing the connection. Rinse and repeat.

@LangLangC provided a link to other images depicting the hole and channel pattern in other column sections.

The same can be seen an image in @T.E.D.s' answer to this question

9
Why did Homer’s Greeks sack so many cities in the Trojan War? Does it make them mostly pirates and slave raiders?
32
What happened to these buildings near the Seine?
5
What are these cubbies?
35
How were medieval castles built in swamps or marshes without draining them?
7
Why do old townhouses sometimes have a flat, windowless, undecorated wall on one side?