Why wasn't Akkadian translated into other more common languages?

From what I have gathered I believe there are currently no examples of Akkadian literature, written on cuneiform tablets, being translated into other languages onto papyri outside the Mesopotamian area (there are examples of Akkadian cuneiform script being translated into other languages within Mesopotamia such as old Aramaic: e.g the Behistun Inscriptions) during the Hellenistic period. My question is why?

Was there anything that prevented Akkadian cuneiform script being translated into other more common languages, such as cultural/political conflict?

Were cuneiform tablets available/accessible for anyone who wished to review them within the places where they were kept such as Mesopotamian temples and libraries?

Was it simply because there was no real reason for anyone from other cultures, such as Greek, to bother translating?

Most likely there just wasn't a lot of Akkadian (Cuneiform) "writing" to be found outside of Mesopotamia, and particularly not what one would consider "literature".

Cuneiform was a logographic (1 glyph per word) system, that over time acquired syllabary (1 glyph per syllable) characteristics. Logographic languages, while pretty, can be very difficult to learn since they require a symbol for every word in the language. That makes popular "literature" more difficult to generate for them, and less rewarding, as only the very highly trained could generate or understand your novel. However, by the time the Akkadians got hold of it, it was more like a syllabary with some common pictographs kept. That's much more feasible.

The other issue Cunieform has is that its designed for use on clay or stone. A good size novel or even short story written in that medium obviously isn't very portable. A paperback of the Epic of Gilgamesh online appears to be about 128 pages. That much writing in fired clay tablets would probably weigh in the tons. Moving even a single copy would require an entire train of wagons. So you wouldn't expect to often find it very far from where it was generated.

So where would Akkadians have been generating their writings? Well, here's a map of the Akkadian Empire, and as you see its pretty much limited to the Tigris and Ehuphrates valleys, although they did do some campaigning towards Lebanon and Elam (SW Persia). 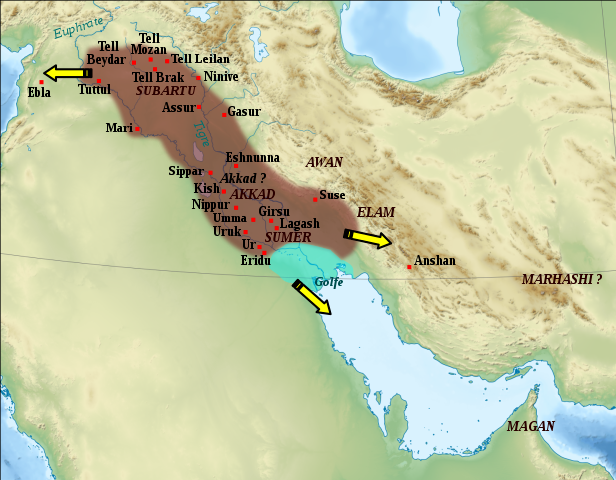 To be fair, they were the dominant power in the Near East at the time, so it would have been a common second language. However, literature isn't usually generated for an intended audience of largely second-language readers. They'd typically want to use their own language for that.

Of course by the Hellenistic Era, even better Alphabetic (1 symbol per vowel or consonant) systems has been developed and in use for nearly a thousand years. So anybody wanting to translate something like the Epic of Gilgamesh would have to go to where all copies of it existed, which would be somewhere in the area above. Since that's where all copies were, that's necessarily where nearly all Akkadian Cuneiform experts were too. (Can't learn a system you can't see).

Is there (if I may reformulate your question a bit) evidence for ancient translations of texts in cuneiform (Akkadian, Babylonian, Old Persian, Elamite) script into other writing systems? There is, but not very much. You mentioned already the translation of the Babylonian version of Darius’s Bisitun inscription into Imperial Aramaic (in the Achaemenid, not the Hellenistic period). We also have from the same period the Aramaic endorsements on some of the Elamite tablets from Persepolis. This is evidence, if not for translation, then at least for the paraphrasing of cuneiform texts in a non-cuneiform writing system. The most substantial evidence is the fragments of the “Babyloniaca” of Berosus in the early Seleucid period. Berosus was a priest in the temple of Marduk in Babylon and he clearly derived his information from Babylonian tablets preserved in his temple. This work does not survive as such, but it is quoted by various later authors. It does show that there was not in principle any reason to reject the reality of translations from Akkadian to Greek.

Not the answer you're looking for? Browse other questions tagged ancient-history mesopotamia ancient-babylon hellenistic-greece seleucid-empire or ask your own question.

11
Why was ancient Christianity more successful than the Roman pantheon and Judaism in gaining followers?
21
Why didn't the Persians make and use ballistas and other kinds of artillery?
45
Why was "leaping into the river" a valid trial outcome to prove one's innocence?
1
Do (modern) audio recordings exist for the sound of Ancient Egyptian, Ancient Coptic, or other ancient languages?
3
Why wasn't Persepolis on Darius' royal road?
27
How to explain the apparent discrepancy in the use of papyrus vs. clay tablets between Ancient Egypt and Mesopotamia?