Why do old kitchen stoves have circular openings in the upper surface?

As a sidenote to this question: Why do European 19th century kitchen stoves for solid fuels often have circular openings on top? Is the heating more effective if there is no additional metal between the fire and the cooking vessel on the stove? Cast iron is a good conductor for heat, so I would assume it does not make so much of a difference?

I have tried googling, but all I found was that the rings allow you to enlarge the opening on the stove, not why you would want to enlarge said opening. 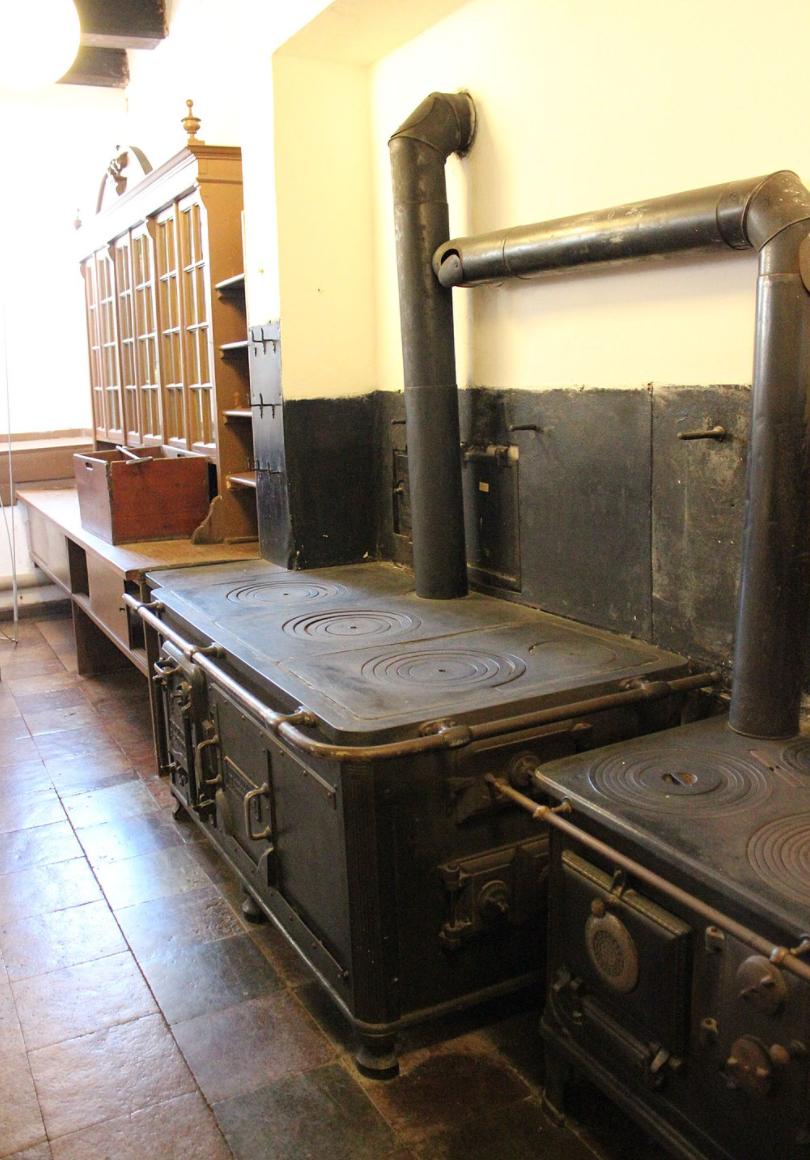 I have no reference other than personal use and observation, having once lived many years in rural areas where virtually everyone used wood stoves.

Yes, you may remove the appropriate sized plate and put your cooking vessel directly open to the fire beneath. This is one way to adjust the heat to the cooking vessel, as is simply moving it to a part of the stove further from the firebox.

People often also add (small amounts of) wood to the firebox through the top rather than the opening in front.

You take out the rings so that the bottom of the pot is heated by the air from the fire.

If you put the pot directly on the metal, you can only transfer heat by conduction, but to get efficient heat conduction the contact area has to be large. However, in the time that these stoves were used, pots, although they generally had a flat bottom, were not precisely engineered but even often hand-made. Also pots were used for a long time and tended to have a lot of scratches and bumps after a while. And the stove itself is cast-iron which is also not perfectly flat.

So the pots would not sit very evenly on a metal surface and the contact area would be small, making heat conduction quite inefficient. Such pots with uneven bottoms are better heated directly by the hot air through convection and radiation from the flame. Modern pots designed for electric stoves have a very smooth bottom. But note also that now induction heaters (which generate a current within the pot and heat it directly) or infrared stoves are becoming more popular, as they don't depend on heat conduction between two (possibly uneven) surfaces which is notoriously difficult to do efficiently.

This is based on own experience with these stoves. When you finished cooking and wanted to keep the food warm but not heat it any further, you'd move the pot onto the metal. Even though the metal was also burning hot, it didn't burn the food.

Related to this, vintage cast iron pans have a heat ring that corresponds to different stove hole sizes.

With the advent of wood-burning stoves, pans were produced to conform to the sizes of the openings in their tops known as "stove eyes". Think of a stove eye as a burner on a modern stove. (Some people still call them that.) A heavy cover piece was left in place when an eye was not directly in use, and removed-- using a special, heat-resistant lifter handle-- when maximum heat from the eye was required.

Heat rings, the rims protruding from the bottom circumference of most early cast iron pans, served multiple functions: as a "seal" of sorts between the pan and stove eye, as added stablility for less-than-perfectly flat pan bottoms, and as a device to help reduce hot spots.

Depending on the brand of stove, and the sizes of its various eyes, appropriately-sized pans would need to be purchased for use with it. Or, in some cases, the stove maker also produced pans, which they supplied for use with their units.

Your assumptions are wrong. It's easier to see why if you change the context slightly.

Imagine a pot of water boiling on a gas stove. Now imagine you have the opportunity to insert a cast iron disc between the fire and the pot. Would you do so?

Generally, you would expect the disc to be less efficient at boiling the water, becasue it would "block" the heat from getting to the pot: some would get absorbed to warm up the disc, some would get radiated off in other directions, etc. You also have the surface effects, where a hot fluid (the air in the stove) is going to have more heat-transferring surface area than the pot-disc interface.

So yes, removing the cover makes it more hot.

This looks more like a physics question than an historical one. I saw several stoves like that, although I never used one and I'm confident they were made that way because there was a perceivable advantage.

From a physics point of view, I'd say the main advantage is using convection rather than conduction to transfer heat to the pan. The hot air would reach the bottom of the pan, cede heat and then fall down, replaced by more hot air coming from the fire.

I watched my grandmother time and time again pull the hob eye out to put in more wood specifically for that part of the stove or to stir it down to cool that area or hob of the stove. I never saw her take the hob eye out and set a pot directly over flame, she cared for her cooking utensils more than just not having the time to heat it up faster. The term hob is not used much anymore and has changed in meaning over the decades. If I remember correctly, my grandmother called them plates. I've heard them called everything so it doesn't matter. My grandfather would get up and build a fire in the kitchen wood stove then bring in different sized kindling filling up my grandmother's wood box. Then he would milk his cows. When he was done milking the cows and and coming back, my grandmother would have every thing set up and was cooking breakfast. When he walked in the door setting down the different 5 gallon cans of fresh milk my grandmother would tell him whether she wanted warm milk for breakfast or cold. If she wanted warm he poured out warm into a pitcher for her, put the lid back on and put it outside to cool down. Then he would wash up and go sit down at the table in time for my grandmother to put food on the table for everyone. Her kitchen would stove was bipowered she could either use the wood to heat it or she could use electricity. I do not remember her ever using the electric part other than the clock that was in the kitchen stove.

5
Where/when does the wok start to differentiate itself from pot-style cooking vessels?

16
How exactly were beer/bread made in Ancient Egypt?