As FDR stated in a White House Press conference on December 17, 1940: "What I am trying to do is eliminate the dollar sign. All right! Well let me give you an illustration: Suppose my neighbor's home catches fire ...if he can take my garden hose and connect it up with his hydrant I may help him to put out his fire. Now, what do I do? I don't say to him before that operation, "Neighbor, my garden hose cost me $15; you have got to pay me $15 for it. I don't want $15 - I want my garden hose back. In other words, if you lend certain munitions and the munitions come back at the end of the war, you are all right."

Was FDR out of touch with how much things actually cost or was a "garden hose" really expensive in 1940?

As I'm writing this, I realize that if you're talking about lending your neighbor a $15 vs. a $300 garden hose, the meaning of his message changes quite a bit. I'm sure much moreso for people just coming out of the depression.

I couldn't find one from 1940, but here's a snippet from a 1950 ad for a "Koroseal garden hose"(commercial site link). They were offering a 75-foot hose for $13.20, which is certainly in the same ballpark as FDR's "$15" a decade earlier. You could save a few bucks with a shorter hose, but if you're trying to put out a housefire, one would imagine the longer the better. 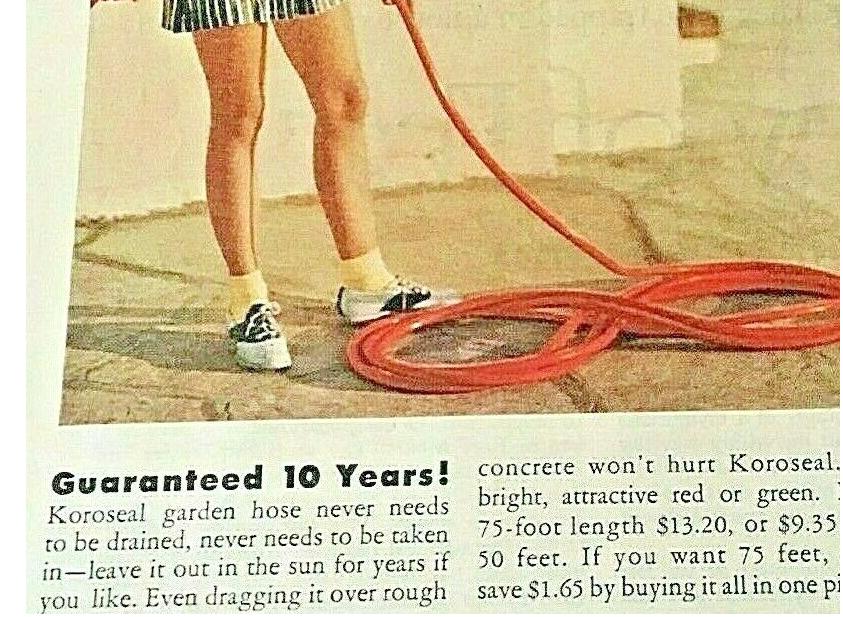 You might think it likely it was a bit cheaper 10 years prior, but it appears that hoses at that time were usually made of rubber, and with WWII in full swing in Europe, it seems likely the demand for rubber (and thus its price) was at a relatively high level.

Stuart F down in the comments found an agricultural supply house selling (shorter) 50' hoses in 1940 for $4.95 tops, and Andrew T. found an ad in the Morristown Daily in 1943 offering them for $3.33. So it seems like under $5 would have been a more reasonable price at the time, and perhaps under $8 for a 75'.

Of course its also possible that part of the context of the analogy was that the neighbor was reluctant to part with the hose due to its extreme cost, or perhaps was talking said cost up in order to start a negotiation (in the middle of a raging fire with a desperate neighbor).

13
Did the Founding Fathers believe that states had the right to secede?
8
What evidence exists to say whether or not FDR was planning to use the Atomic Bomb just as Truman did?
2
Why was Colonel Bill Eddy kneeling in front of FDR and King Saud?
3
Was the title "Democratic-Republican" really used?
18
Did Truman really believe that Hiroshima was a military base?
49
When did FDR announce he was running a 3rd time, and was there any outrage?
30
Was Nixon's Vietnam claim right before the 1968 election true?
7
What was located at the site of Madison Square Garden in 1850?
5
Was Woodrow Wilson really a Liberal?