When and why did blue become the colour of the British Conservative Party?

Ask Question
Asked 4 months ago
Modified 4 months ago
Viewed 546 times
1
Want to improve this post? Add citations from reputable sources by editing the post. Posts with unsourced content may be edited or deleted.

In Britain at Elections Conservative Party candidates always wear blue rosettes and Conservative posters usually feature the colour blue, so that even if someone does not stop to read the poster they can still register that it is an expression of support for the Conservatives. This seems to go back a long way.

I have read the suggestion that the Conservatives used to use red white and blue to be patriotic, but that once socialists made red their colour the Conservatives stopped using it, and as white is considered less of a distinctive colour were therefore left with blue.

However, the Wikipedia article on political colours is illustrated by a painting by Hogarth of polling at an election in 1754, so before socialism was a force in politics, in which the Tories (forerunners of the Conservatives) have a blue flag and their rivals the Whigs a buff flag.

Other British political parties have their own associated colours: red for Labour, yellow or orange for the Liberal Democrats, and in recent elections green for Greens, purple for the United Kingdom Independence Party ('UKIP') etc.

Consequently it sounds strange to British people that in recent years commentators in the USA have taken to talking of 'red states' as the conservative Republican ones and 'blue states' as the liberal Democrat ones.

Blue was adopted by some Tories (later to become formally known as Conservatives) from around the middle of the 18th century. Before that (from around 1680) it was used mostly by Whigs. However, it's important to note that were many changes in party colours over time and, also, regional variations. Blue was not formally adopted by the Conservative party until 1949.

The use of blue in British party politics has a long complicated history dating back to at least the Exclusion Crisis of 1679-81 when it was associated with the earliest Whigs who wanted to exclude James II from the throne on the grounds that he was Catholic:

The historical fortunes of the idiom of "True Blue" Protestantism also testifies to the shifting valences of political labels. During the Restoration, in the context of the Popish Plot, the Exclusion Crisis, the Revocation of the Edict of Nantes, and by allusion to the Scottish Presbyterian party (which had adopted blue as its color, in contradistinction to the royal red), the Whigs were known as the "True Blues" and had proclaimed themselves to be the "true blue" defenders of English Protestantism (against the onslaught of Catholicism).

Just prior to this (and overlapping a little in time), Whigs were also associated with green and, notably, the Green Ribbon Club founded around 1675. They "wore on their hats a bow, or bob, of green ribbon" and were in opposition to King's (Charles II) court. Then,

by the summer of 1681 a different colour from green was being worn by many Whigs in London, some sporting blue ribbons, to mark themselves as Monmouth's supporters, to which some Tories responded by wearing red ribbons, to identify themselves as the duke of York's men.

The Whig connection with blue was still evident in the early 18th century, but [it was evolving into buff] in some regions at least. One observer of the 1705 election in Honiton noted:

the two parties were very nicely distinguished . . . Buff was the symbol of the Whigs. These had box in their hats, doors and windows; the other [Tories] had laurel leaves

...as early as 1715 the diehard Bishop Burnet was referred to as a “true blue Whig” upon his death, and by mid-century the combination of buff and blue was widely associated with the Whigs.

Around the same time, there were

Blue (alone) was later adopted by Tories (who were to evolve into the Conservative Party during the Robert Peel administrations of the 1830s and 1840s). Later in the 18th century,

the "King-and-Church" men were the ones who proclaimed themselves to be the True Blues (sometimes even in preference to the "Tory" label), in allusion now only to the figurative sense in which "true blue" means "faithful, staunch and unwavering (in one's faith, principles, etc.): sterling, genuine, real" (OED, sv "blue, adj.," sense 1e). For example, in 1755, the Tory newspaper Felix Farley's Bristol Journal "alluded to 'the Blues' or 'the Blue interest' rather than to the Tories" and Edward Ward's British Weekly Intelligencer charged "that the True Blues of Bristol sang Jacobite songs" (Sack 1993: 50, 54n.35).

Even so, Tory PM William Pitt the Younger's Whig opponents in 1784 (who included the Prince of Wales) still associated themselves with blue, along with buff:

Source: George Wingrove Cooke, 'The History of Party; from the Rise of the Whig and Tory Factions, in the Reign of Charles 2., to the Passing of the Reform Bill, Vol. 3'

Blue and buff was also a connection between the American revolutionaries uniform and the Whigs who supported American independence:

By the time of the Revolution in America, the buff and blue had become universally understood to represent resolve and faithfulness to a cause....

...The Whigs of the late 18th Century advocated constitutionalism, legislative supremacy over the Crown, religious liberty, natural rights, the separation of powers, due process and property rights -- the very foundation of what would become the American experiment.

When celebrations were called for upon the recovery of George III's health in 1789, the more extreme Whigs complied, but with a 'message':

Brooke’s club, the St. James’s haunt of the Whig party, hosted its own gala to ‘toast’ the King’s health. Newspapers, however, reported that the dress required would be court dress in full embroidery but rendered in ‘blue and buff’ (the colours routinely adopted by the Whig party, echoing the uniform of the American revolutionary army) 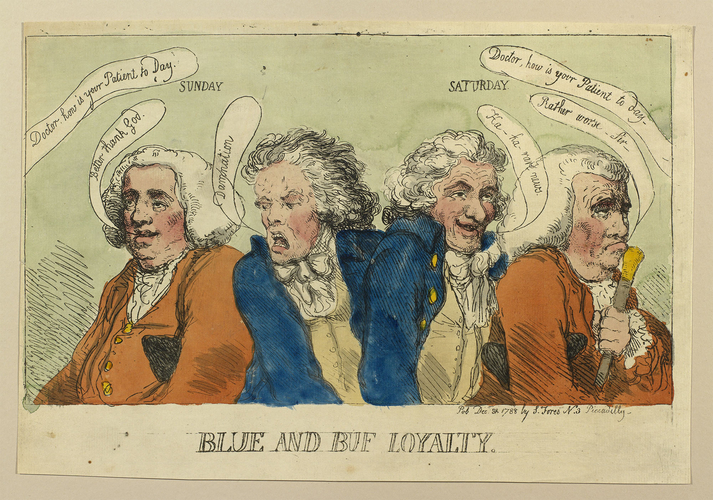 "Blue and Buff Loyalty. 31 - 31 Dec 1788." "A hand-coloured print of a satire on the Whig's hopes for power with the ascension of the Prince of Wales as Regent." Image & text source: Thomas Rowlandson, Royal Collection Trust.

Moving on to the 19th century,

The association of the color blue with the Tories or Conservatives has persisted across the 19th century and beyond. Thus, for example, writing to his sister in 1835, Disraeli proclaims, "I . . . have gained the show of hands, which no blue candidate ever did before" and Anthony Trollope, in Farmley Parsonage (1860) states of a conservative neighborhood, "There was no portion of the county more decided true blue" (OED, sv "blue, adj.," sense 6a and 6b).

However, there were many regional variations, particularly (it seems) in the first half of the 19th century. For example, Tories or conservatives were blue in Reading, Colchester and Ipswich (where Whigs were yellow or orange), but orange and purple in Norwich, and red in Carmarthen and Great Grimsby (where the Whigs were blue).

Thus, the implication in articles such as this that blue was first associated with the Tories / Conservatives when the Labour Party (founded in 1900) associated itself with red is leaving out a long history of party colour associations which, even after WWII, sometimes varied locally. Further,

It wasn’t until 1949 that the National Union of Conservative and Unionist Associations voted to formally adopt blue as the official colour of the party.

All emphasis is mine

Not the answer you're looking for? Browse other questions tagged political-history great-britain symbols tradition political-party or ask your own question.

28
Why did the Federalist Party collapse?
13
When did the parole of prisoners of war become unacceptable?
9
How different were Labour and Conservative party lines on race immigration and empire in around 1962?
14
What was the perception of the average British person of the Boston Tea Party?
10
When in September 1939 did the British diplomatic mission leave Warsaw?
7
When did Dei gratia/fidi defensor first appear on British coins?