How to get per 1000 deaths numbers for the 1932-34 Holodomor in Ukraine for the rural areas only, against the less starving town population?

As to wikipedia, Holodomor is about:

On region level, with the large town populations, the numbers are already high, they must be much higher in the rural areas then than in the towns.

I had a look at the source of this table, Ukrainian Research Institute, Harvard University, and found at first that there was no per 1000 map of the deaths of only the rural population although the overall percentage is known (which was a wrong finding, I found that map later in the same source, see at the bottom): 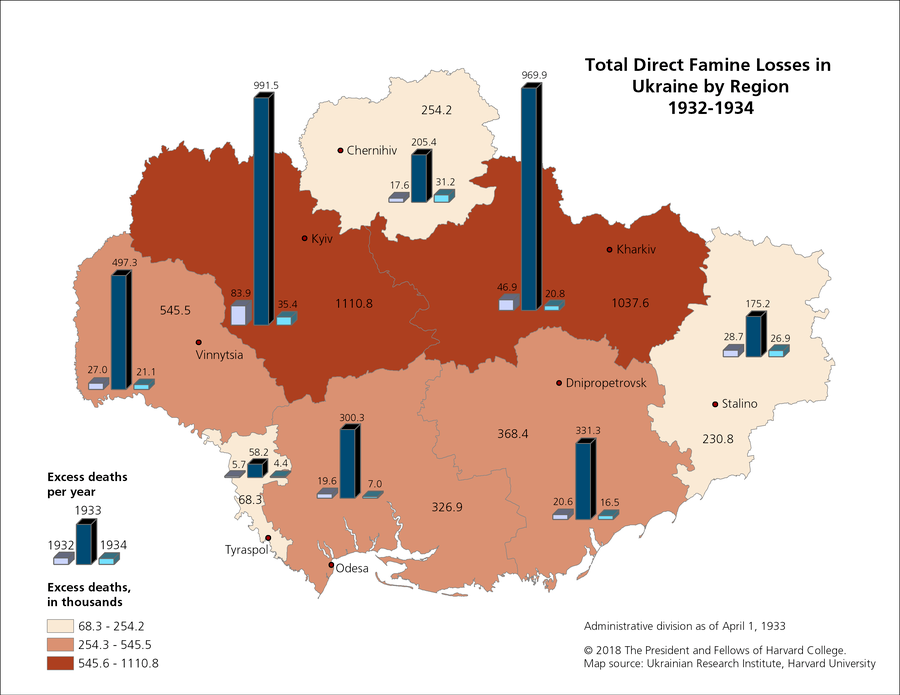 Full quote of the source

The total number of 1932-1934 famine losses in Soviet Ukraine is estimated at 4.5 million, with 3.9 million direct losses (excess deaths) and 0.6 million indirect losses (lost births). The 1933 midyear population of Ukraine is estimated at 29.6 million. The 3.9 million direct losses are approximately equivalent to 13 percent of the total population in 1933. The 3.9 million is composed of 0.3 million in urban areas and 3.6 million in rural areas; these numbers are approximately equivalent to 4 percent of the urban and 16 percent of the rural population in 1933. It is important to note that the Holodomor is commonly understood as occurring in the period 1932-1933. However, the analysis here shows that significant famine-related losses also occurred in 1934. This is the first time that regional estimates of direct losses have been made for Ukraine.

This map visualizes data based on estimates of deaths during the Holodomor period derived under the "Estimation of Regional Losses of the 1932-1934 Famine in Ukraine" project conducted by Oleh Wolowyna (University of North Carolina at Chapel Hill) and Omelian Rudnytskyi, Nataliia Levchuk, Pavlo Shevchuk, and Alla Kovbasiuk (Institute of Demography and Social Studies in Kyiv).

The estimation here of Holodomor losses is based on separate yearly urban and rural population reconstructions by age and sex, using data from three Soviet censuses (1926, 1937, and 1939), as well as annual vital statistics and migration data for the 1927-1939 period. 1926 and 1937 census data were adjusted for undercounts and other problems, while 1939 census data were adjusted to eliminate falsifications implemented to cover up large population losses understood to be due to the famine and other repressive policies. Yearly registered births and deaths were adjusted for undercounts, especially during famine years when the undercount reached extreme levels. Based on these data and detailed data on migration, taking into account urban-rural reclassification, yearly population figures were reconstructed according to age and sex for Soviet Ukraine's eight regions, as well as for urban-rural areas.

One could calculate this for the whole rural areas:

So that on the whole, the Holodomor excess deaths per 1000 were:

There are maps on rural and urban splits of Holodomor excess deaths per 1000 in the same source: 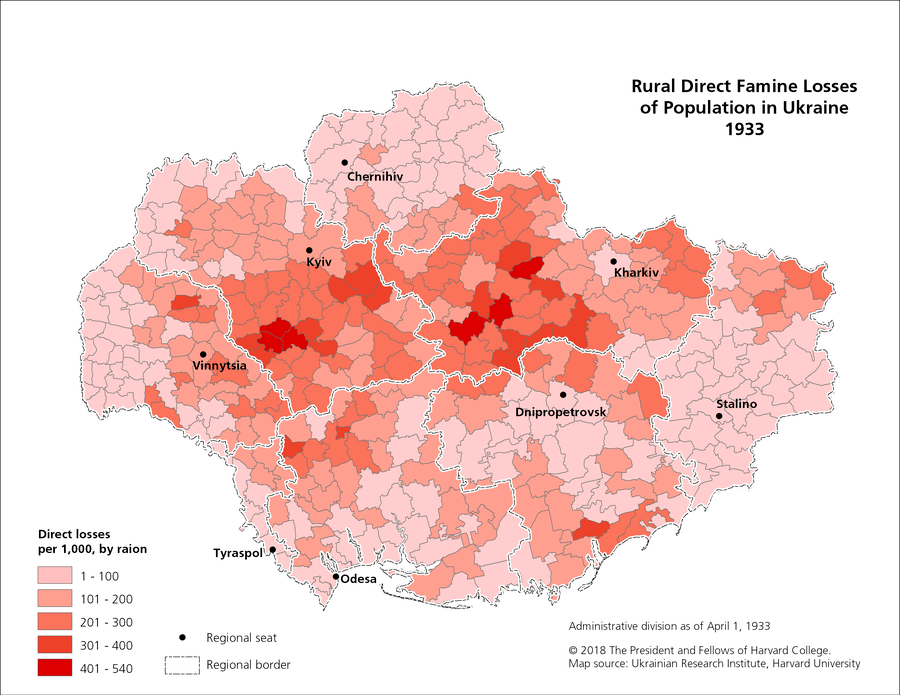 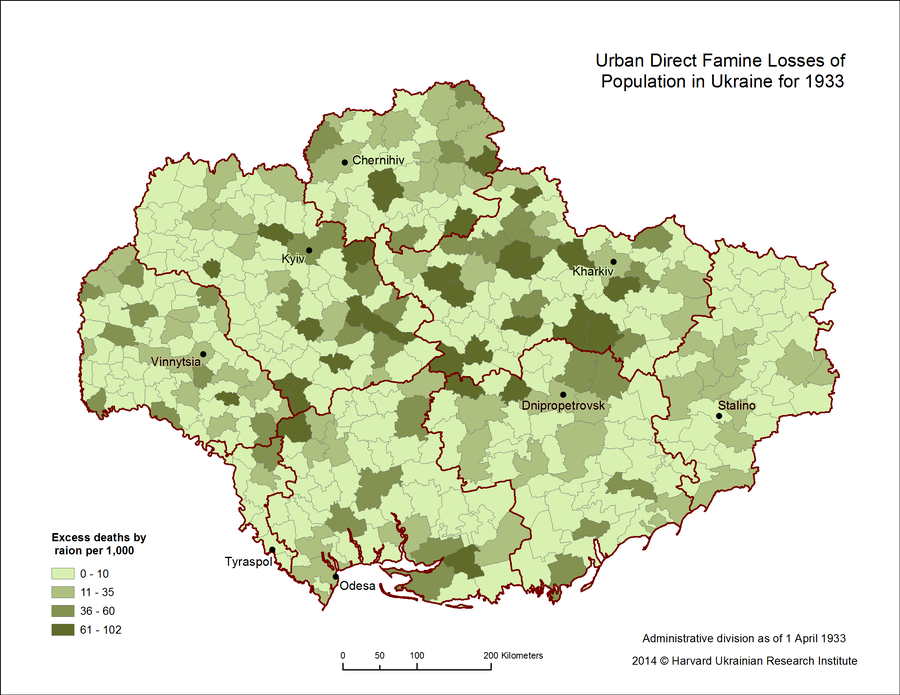 You can find more maps about 1932, 1933 and 1934 region levels there as well and other maps, but the main thing is that the rural population had to suffer much more than the urban population, rural range from roughly 100 to 500 while urban from 10 to 100 (very roughly, just looking at the colours). I do not have enough reputation to post more than the eight links here, have a look at the absolute number maps on the website.