During Iranian Hostage Crisis, were shredded documents reassembled by children?

The movie Argo(2012) is a historical thriller detailing a CIA rescue mission during the Iran Hostage Crisis. The movie depicts Iranian intelligence attempting to re-assemble shredded documents from the American embassy. The movie states that the documents were re-assembled by "sweat shop children". While there is amble evidence that the documents were (painstakingly) re-assembled, I couldn't find any evidence about it being done by children in a cursory search. Does anyone have more info on this?

Another equally un-sourced claim that it was "carpet weavers" (and carpet weavers could certainly also be children): shredbox.com

The Wikipedia section on the movies historical inaccuracies doesn't mention it either way.

The movie Argo is loosely based on the Wired article How the CIA Used a Fake Sci-Fi Flick to Rescue Americans From Tehran By Joshuah Bearman April 24, 2007. Within the article the shredded documents are mentioned (emphasis mine):

As time passed, the threat of discovery was mounting. The militants had been combing embassy records and figuring out who was CIA. They had even hired teams of carpet weavers to successfully reassemble shredded documents. (The recovered papers would later be published by the Iranian government in a series of books called Documents From the US Espionage Den.) They might eventually figure out the true number of embassy staff, count heads, and come up short. Outside, the Revolutionary Guards had recently been making a show of force in Shemiran, menacing the streets where foreigners lived and coming very close to both hideouts. Once, the Americans had to dive away from the windows when a military helicopter buzzed the Sheardowns’ house. And everyone was spooked when an anonymous caller to the Taylor residence asked to speak with Joe and Kathy Stafford and then hung up.

So this aspect of the movie was sourced in the original article by Bearman.

Eventually the CIA even jumped in and tweeted about the movie, including the shredded documents (emphasis mine):

Real #Argo: Skilled carpet weavers did reconstruct shredded documents, but they didn’t reveal one of the Americans at the last moment.

Documents from the U.S. Espionage Den can be found on the internet. A page from wikimedia illustrates the existence of the documents: 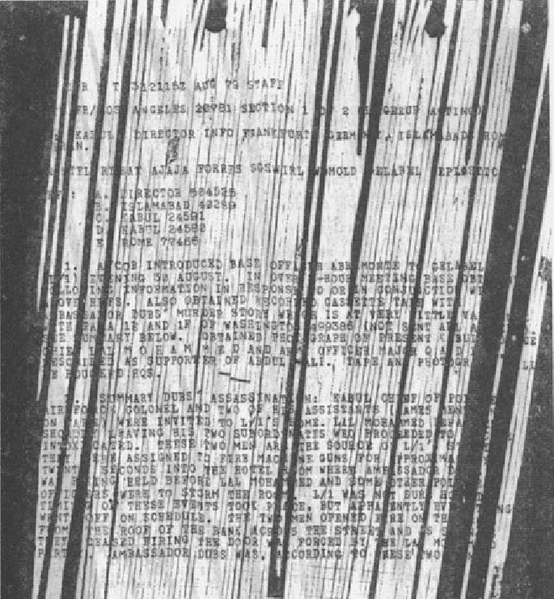 So we have conformation the documents were reassembled, though the only description of those performing the task is 'carpet workers'.

(I personally don't think the CIA would have resisted 'getting the dig in' during their tweet if they had any information that these workers were child laborers in a sweat-shop situation.)

Another version of these events is presented in the book Our Man in Tehran, by Canadian historian Robert Wright. It states that the documents were reassembled by student volunteers over several years:

Once the vault was surrendered, the students imposed a strict rule that it was not to be disturbed in any way. They then resolved to catalogue and reassemble all the shredded strips by hand. Teams of up to twenty volunteers, most of them high school students, worked for the next six years recombining the tangled contents of the shredders. In 1985 their work was complete: 2300 files (a total of 3000 pages) were published in 85 volumes.

This does hint at younger individuals performing the work, but again no documentation which supports the claim that these were 'sweat shop children' .

Not the answer you're looking for? Browse other questions tagged united-states iran cia or ask your own question.

33
How beneficial were war bonds to the US during WWII
3
What did Kennedy know about Soviet missiles during the Cuban missile crisis?
44
Were there U.S. weapon restrictions during 19th century?
2
Were there many foreigners fighting during the American civil war?
2
Has the United States paid US dollars as reparations to children other than a "child" of Japanese American internees during World War II?