In his book Panarion, Epiphanius of Salamis writes about a Jewish sect called the Osseans. Among other bits of information, he writes:

"I have been told that they originally came from Nabataea, Ituraea, Moabitis and Arielis, the lands beyond the basin of what sacred scripture calls the 'Salt Sea.' This is the one which is called the 'Dead Sea.'" (Pan. I, 19:1:2, translated by Frank Williams)

(I hope I copied the entire Greek section)

While I am not really sure why he refers to Iturea as being beyond the Dead Sea, more mysterious to me is this place called Arielis. Arielis seems to come from the Hebrew word "אריאל" (Ariel)1, but I have not managed to learn what area this is referring to. I am not aware of any ancient territory around ancient Israel called by this name. Does anyone know?

1 Traditionally, the word has multiple meanings in Hebrew: a. Another name for Jerusalem (Isaiah 29:1). b. A name for the Temple in Jerusalem (for example, Shemot Rabbah 29:9). c. A name for the altar in the Temple, per the Masoretic Text (Ezekiel 43:15-16). d. A title for Moabite chieftains in biblical times (Samuel 2:23:20, Chronicles 1:11:12). e. A personal name (for example, Ezra 8:16). f. A name of an angel (Zohar Vayikra 2). The Moabite reference might be relevant, but Moab is already mentioned on the list.

Most likely this is Areopolis, or modern day Rabba.

This rendering of the word seems indeed strange enough for editors to explain their choice of transcription after noting that the very sect Osseans itself is a unique reporting from Epiphanius to begin with as follows:

To be honest, my nerves get allergies from the user interface on the above site, so I did not check on the exact edition mentioned there. (Neither source of the digitisation nor the reference of Eusebius mentioned. Anyone able to stomach such UIs & willing to help out: please do so.)

One version of Eusebius' Onomasticon matching the German/Greek text above reads:

Arina (Isa. 15:9), also Ariel. A, S: the lion of God. This is said to be Areopolis because from that time even up to the present those who live in Areopolis call their idol Ariel, from the worship of Ares, after whom they named the city.

— Translated By G.S.P. Freeman-Grenville, Indexed by Rupert L.Chapman III, Edited and Introduced by Joan E. Taylor: "The Onomasticon By Eusebius Of Caesarea", Palestine in the Fourth Century A.D., Carta: Jerusalem, 2003.

Epiphanius, writing in the fourth century CE (c. 378), tells us of a figure named “Elxais,” or “Elchasai,” who led an offshoot of Jews called Ossaeans that were “of those that came before [Elxai’s] time and during it.” The Ossaeans “originally came from Nabataea, Ituraea, Moabitis and Arielis, the lands beyond the basin of what sacred scripture called the Salt Sea,” in Arabia, the Hijāz.

— Micah B.D.C. Naziri: "What The Religions Named In The Qur'an Can Tell Us About The Earliest Understanding of 'Islam'", Wright State University CORE Scholar Thesis, 2012. link

Regardless of the strange listing beginning with Nabatea, Moabitis, Iturea (which on first glance looks like a clerical error for Idumea to me, although that looks plausible in English, but less so in Greek, Hebrew or Aramean …), taking the ancient source at face value, and arriving at an Areopolis in roughly that area, we now look on modern day Rabba in Jordan.

One caveat to observe: Rabba/Areopolis or Rabbat-Moab might be identical to the more ancient but not precisely locatable 'city' of Ar/Ar-Moab (as known from Isaiah 15:1), but like Ar also Areopolis seems to be mentioned often in older texts not necessarily as to mean 'a city', but also 'a region' of that name. 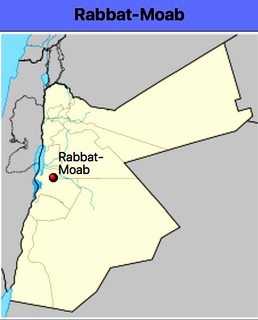 Not the answer you're looking for? Browse other questions tagged middle-east geography 4th-century or ask your own question.

9
Where was the pre-war (ww2) border between Poland and Germany?
10
Where was the Japanese surrender signed on Okinawa in June 1945?
2
Why was Goguryeo able to expand rapidly under Gwanggaeto's rule?
2
Where were Hindus and Sattagydia in the late Achaemenid Empire?
2
Where can I find a blank outline of Silk Road routes?
17
Where on a modern map are these areas of Ptolemy's map?
26
Why was the northern boundary of the Mongol empire set where it was?
5
Where were the best ancient wine regions in Israel, called Kerutim & Hatoulim in the Mishna, located on a map?
9
Where is Hermodontus?