Why is it said that the Qin dynasty was the first to unite China?

Ask Question
Asked 1 month ago
Modified 1 month ago
Viewed 256 times
4
Want to improve this post? Add citations from reputable sources by editing the post. Posts with unsourced content may be edited or deleted.

I have often heard that the Qin dynasty was the first to unite China. For example, Wikipedia says:

Qin Shi Huang, or Shihuangdi, was the founder of the Qin dynasty, and first emperor of a unified China.

I understand that the Zhou dynasty kings slowly lost power, being reduced to a figurehead during the Eastern Zhou dynasty with real power fragmented into several states. However, many later dynasties also ended in fragmentation (e.g. the Han, Jin, and Tang dynasties), so I don't think this explains why the early Zhou dynasty isn't considered to have united China.

It should be noted that to some extent this is a definitional problem. The idea that Qin is the first unification of China is a conventional historical narrative rather than something that can be definitively, objectively, measured. Neither Qin nor Zhou actually unified even the core lands of modern China. Of course, the propensity of modern Chinese historiography to stress the sacred importance of national unification muddles the water.

That said, there are significant qualitative differences between Qin and Zhou that makes the former a much better candidate to claim unification.

Zhou controlled much less of the Central Plains than Qin 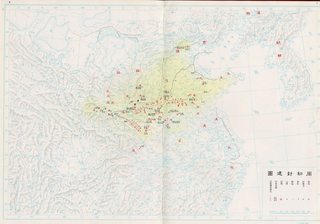 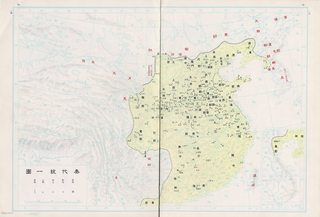 (Please note that due to a lack of surviving records, it's impossible to ascertain the exact limits of either empire's territorial extent. Instead, the density of the marked settlements - which were formally controlled by the respective polities - provide a reasonable gauge for judging effective control.)

Neither Qin nor Zhou actually fully unified what is now considered China Proper, but it is nonetheless immediately obvious that Qin came much closer than Zhou.

Importantly, back in those times the idea of "China", in the sense of the "Middle Kingdom", essentially corresponded to the Central Plains area. At it's zenith Zhou exerted hegemonic influence over the Central Plains, but even indirect rule through Zhou vassal princes was concentrated in cities and their immediate vicinities. Much of the land between cities remained occupied by effectively independent polities including nomadic tribes and non-Zhou aligned cities.

While Qin faces similar issues in the less developed south, the First Emperor wielded effective control over virtually all of the Central Plains heartlands.

A confederation of city states

The two empires were separated by nearly 800 years, and civilisation on the Central Plains changed very drastically over the intervening centuries.

At the time of Zhou's foundation, this was a network of city states more akin to Archaic or Classical Greece. When the Zhou kings triumphed over the preceding Shang, they dispatched armed settlers to colonise strategic locations in their new-found empire, under the leadership of loyal retainers or royal relatives who then rule the new cites as hereditary princes.

Theoretically, these princes answerable to the Zhou kings, and made regular reports to the capital in person, but they otherwise ruled their own fiefs autonomously. They commanded their own armies, collected their own taxes, and generally wielded all the political and military powers akin to sovereign over their own land. Direct rule by the Zhou kings mostly extended only over their own demesne, which formed two clusters around Feng and Hao, the traditional capital, and Cheng Zhou, a newly constructed bastion in the east.

Zhou power were primarily based in these fortified urban strongholds, from which local princes projected power over a porous area. Large number of native inhabitants, with their own cities, as well as barbarian tribes, continued to inhabit the land between formally Zhou subject cities. The Zhou kings at best exercised a form of suzerainty over the cities, and generally negotiated with the tribes as foreign nations.

In other words: the Zhou kings did not rule over a "unified China" in a truly meaningful sense.

In contrast, when the First Emperor created his new title, he directly ruled over a vast bureaucratic machinery that directly administered most of the Central Plains and beyond. The empire was divided into commanderies - administrative divisions governed by administrators appointed by the imperial capital, and subject to direct orders from the royal court. Tax revenues were collected and sent to the imperial treasury for centralized disbursements; there were no hereditary local princelings; and the military was strictly controlled by central authority.

The Records of the Grand Historian reports two alchemist describing the First Emperor as:

The Emperor decides all issues in the Empire whether important or trivial. He measures reports in stones, and don't rest until he meets a quota for the day or night.

Qin and Zhou's conquest of "The World" were seen differently

Perhaps as a logical consequence of the differing nature of their governance mode, observers saw Qin and Zhou's respective conquest of the known Sinitic world very differently. In the historical record, Zhou is mostly described as either defeating only the preceding Shang, or else framed solely in terms of its own rise. Qin's unification, on the other hand, are almost always explicitly phrased in terms of conquering the world.

For example, the Book of Documents describes the aftermath of King Wu's overthrow of Shang as:

And the Lost Book of Zhou:

The Biography of Boyi and Shuqi:

King Wu having pacified the turmoil of Yin (Shang), the world reveres/follows Zhou

Finally, the Annals of Zhou says:

Compare and contrast with how Qin's conquests are described. In the Annals of Qin's First Emperor:

Or the Strategies of the Warring States:

Five years the State of Yan was destroyed, and King Xi of Yan captured. (Thus) Qin holds the world.

And the Faults of Qin:

Swallowed both Zhou and destroyed the other states, ascended to the supreme position and ruled the universe, raising to flog the world.

tl;dr: Qin's unification, and Chou's foundation, are both materially and philosophically very different - and more importantly, seen as very different by even the earliest chroniclers.

Not the answer you're looking for? Browse other questions tagged political-history china ancient-china or ask your own question.

20
What events led to the fall of the Zhou Dynasty during the Warring States period?
16
Why is the Qing Dynasty in China considered Feudalistic?
14
When was tofu invented? Was it specifically for vegetarian consumption from the beginning?
33
If the Ch’in dynasty was so short-lived, why was China named for it?
4
Was there a "literate class" outside the Shi in Zhou-dynasty China?
5
Did the first emperor of China die of mercury poisoning?
8
What was the de facto rule by which the imperial title was transmitted in various Chinese dynasties?
3
What in Confucianism reduced the importance of the clan structure and made these societies more secular?
25
When and how did the Han ethnic group become by far the biggest ethnic group in China?