Who were some of the specific people in the Renaissance who wrote about their period being different from the Middle Ages?

I remember reading about people in the Renaissance who characterized their age as being different from the Middle Ages, but I haven't been able to find who some of the people who made those statements were (I assume they were likely relatively prominent intellectuals). I'd like to find who they were primarily to know exactly when people started seeing their time period distinctly (in 1450? 1500? etc.)

This could be answered by looking at how and when the term "Middle Ages" was coined. This starts obviously in Trecento Italy, with a new wave of vernacular literature that will later cause the whole, varied, artistic movement of the Renaissance (Quattrocento, Cinquecento).

As said, Petrarch is the key, early figure, but he's not the only one. Coluccio Salutati is the important figure in promoting reading ancient texts, which is a key component of the Renaissance.

Also, Flavio Biondo is the relevant historian to be mentioned here (Petrach was a poet, writer). All these people were living and working in Tuscany cities at the time.

See this table below that shows when and how the term "middle ages" was coined. The last column is an interpretation of wheter the term could be considered equivalent to our current, modern, use of "Middle Ages", in the context. 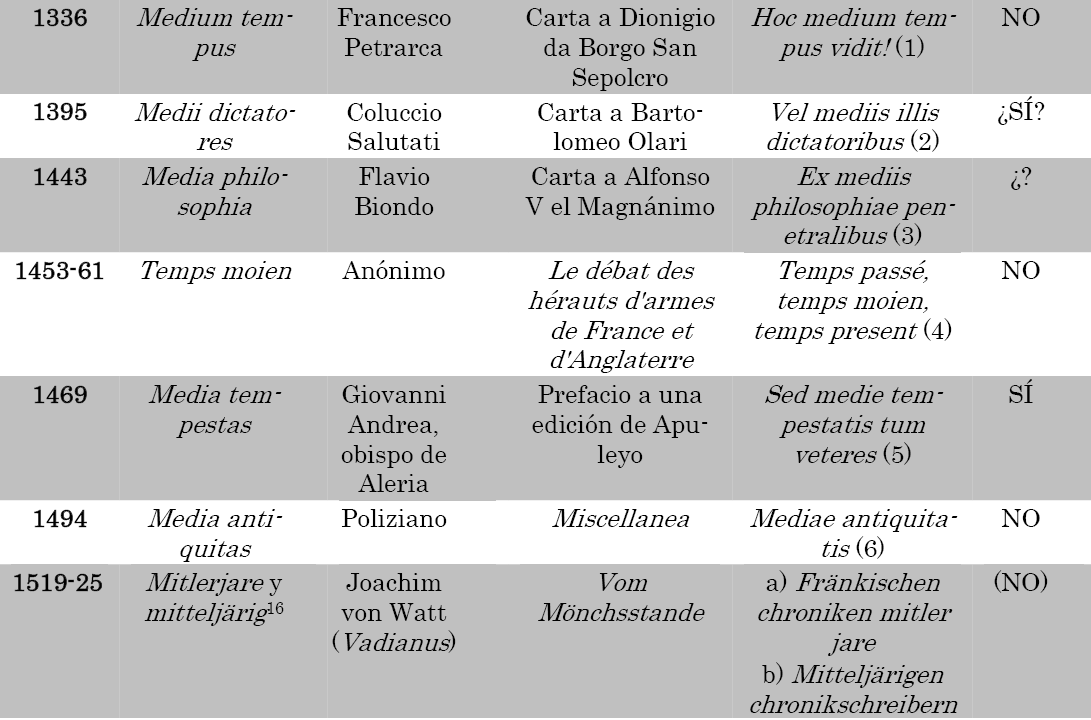 Francesco Petrarca (or Petrarch, anglicized) is often cited as a, if not the, key figure in noticing the difference between the periods of the middle ages and the renaissance (or, rather, the 'gap' between the classical and contemporary times that were the '"middle" ages').

Peter Raedts in his book "The Discovery of the Middle Ages - History of an Illusion" 1 mentions how Petrarca in 1341 was laureled poet in the Roman Capitol by Orso of Anguillara. During his acceptance speech, Petrarca, fully aware of the 1200 year break between this and the last time the ceremony was held - then in honour of Publius Papinius Statius - emphasized the extraordinary nature of this event.

Not the answer you're looking for? Browse other questions tagged renaissance or ask your own question.

8
What were the traveling practices of merchants, roughly between the Middle Ages and the Renaissance?
12
Were "hitmen" a real historical occupation?