For those unfamiliar, here's a crude ascii art of what the map looks like:

My commute in South Korea takes me across the Han River, and it is by no means small. It is deep and wide in every part. So this excerpt on the Korean War from Wikipedia leaves me confused:

On 28 June, at 2 am, the ROK blew up the Hangang Bridge across the Han River in an attempt to stop the KPA. The bridge was detonated while 4,000 refugees were crossing it and hundreds were killed. Destroying the bridge also trapped many ROK units north of the Han River. In spite of such desperate measures, Seoul fell that same day. A number of South Korean National Assemblymen remained in Seoul when it fell, and forty-eight subsequently pledged allegiance to the North.

The only thing I found about it is this page on army.mil which reads:

The first North Korean tanks crossed the Han River on 3 July after one of the railroad bridges had been repaired and decked for tank traffic.

Which leaves me once again confused, since that suggests they captured Seoul without tanks.

Did they not have to cross the river to capture Seoul?

At the time, most of Seoul was north of the Han River; in particular all of the important government buildings and military headquarters. It wasn't until 1963 that significant portions south of the Han were incorporated. 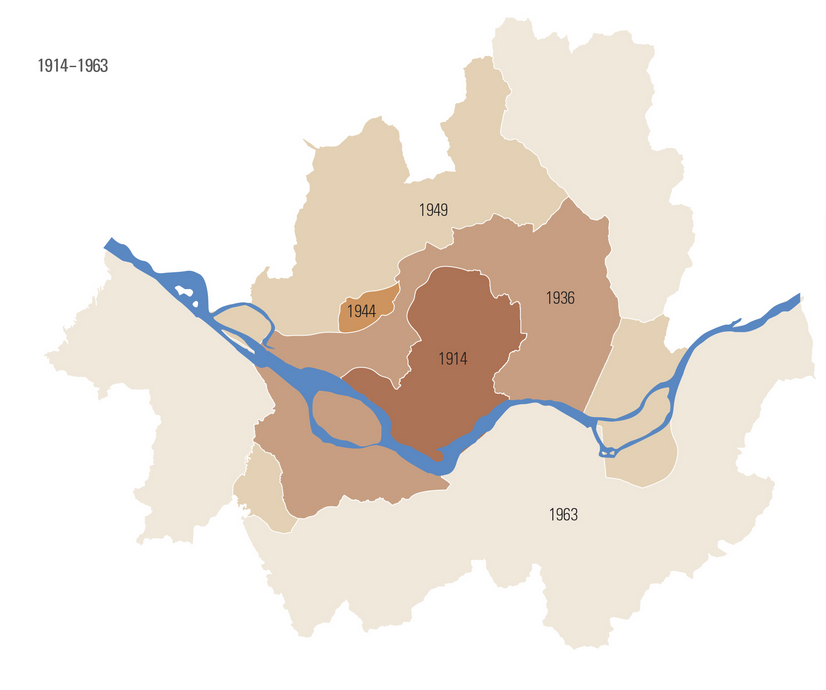 Or to update your map.

Seoul north of the Han fell on the 28th, but the portions south of the river such as Yeongdeungpo did not.

...that suggests they captured Seoul without tanks

They captured the portions north of the Han with tanks. Yeongdeungpo, south of the Han, was captured without tanks.

How did the KPA cross the river so quick?

The KPA crossed the Han on the 29th when the ROK army was in complete disarray.

The KPA was a heavily mechanized, Soviet-style army with tanks, heavy artillery and other heavy weaponry. In contrast, the ROK had no tanks, no anti-tank weapons, and no heavy artillery. The war took the ROK by surprise, they mobilized piecemeal, and had little training in fighting an armored force.

(Note: The following quotes are from a 1960s US publication. I've left the spelling of Korean names as-is. I expect they are not the best, feel free to update them.)

Of the various factors contributing to the quick defeat of the ROK Army, perhaps the most decisive was the shock of fighting tanks for the first time. The North Koreans had never used tanks in any of the numerous border incidents, although they had possessed them since late 1949. It was on 25 June, therefore, that the ROK soldier had his first experience with tanks. The ROK soldier not only lacked experience with tanks, he also lacked weapons that were effective against the T34 except his own handmade demolition charge used in close attack.

By June 28th, just three days of fighting, the ROK Army was confused and chewed up, but still resisting.

ROK troops held the North Koreans at the edge of Seoul throughout the night of 27-28 June, and the North Koreans have given them credit for putting up a stubborn resistance. During the morning of the 28th, the North Korean attack forced the disorganized ROK defenders to withdraw, whereupon street fighting started in the city. Only small ROK units were still there. These delayed the entry of the N.K. 3d Division into the center of Seoul until early afternoon. The 16th Regiment of the N.K. 4th Division entered the city about mid-afternoon. One group of ROK soldiers in company strength dug in on South Mountain within the city and held out all day, but finally they reportedly were killed to the last man. At least a few North Korean tanks were destroyed or disabled in street fighting in Seoul. One captured North Korean tanker later told of seeing two knocked-out tanks in Seoul when he entered. The two North Korean divisions completed the occupation of Seoul during the afternoon. Within the city an active fifth column met the North Korean troops and helped them round up remaining ROK troops, police, and South Korean government officials who had not escaped.

Things got worse when the bridges across the Han were blown prematurely leaving a large portion of the ROK Army and their equipment trapped on the north side of the Han.

The premature blowing of the bridges was a military catastrophe for the ROK Army. The main part of the army, still north of the river, lost nearly all its transport, most of its supplies, and many of its heavy weapons. Most of the troops that arrived south of the Han waded the river or crossed in small boats and rafts in disorganized groups. The disintegration of the ROK Army now set in with alarming speed.

On the morning of 29 June, General Yu Jai Hyung with about 1,200 men of the ROK 7th Division and four machine guns, all that was left of his division, defended the bridge sites from the south bank of the river. In the next day or two remnants of four South Korean divisions assembled on the south bank or were still infiltrating across the river. Colonel Paik brought the ROK 1st Division, now down to about 5,000 men, across the Han on 29 June in the vicinity of Kimpo Airfield, twelve air miles northwest of Seoul. He had to leave his artillery behind but his men brought out their small arms and most of their crew-served weapons.

Of 98,000 men in the ROK Army on 25 June the Army headquarters could account for only 22,000 south of the Han at the end of the month. When information came in a few days later about the 6th and 8th Divisions and more stragglers assembled south of the river, this figure increased to 54,000. But even this left 44,000 completely gone in the first week of war-killed, captured, or missing. Of all the divisions engaged in the initial fighting, only the 6th and 8th escaped with their organization, weapons, equipment, and transport relatively intact. Except for them, the ROK Army came out of the initial disaster with little more than about 30 percent of its individual weapons.

This left little to resist the crossings the very next day. 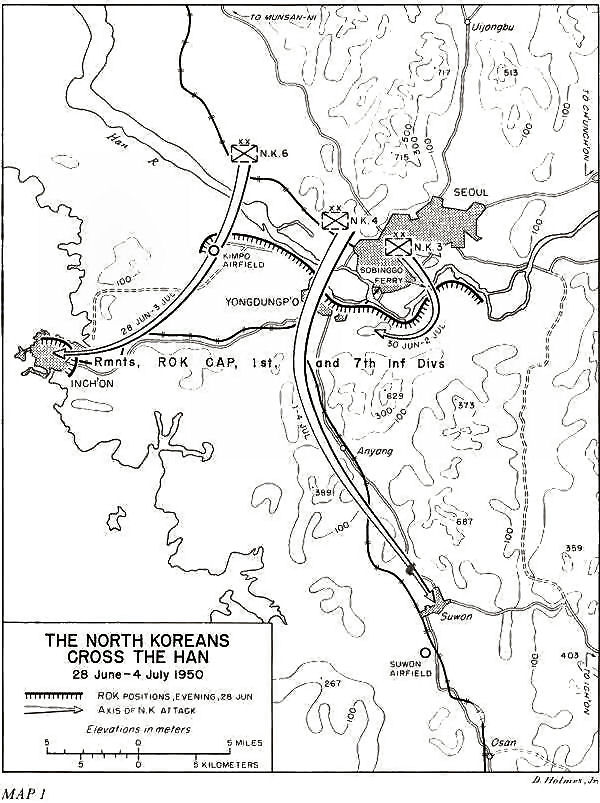 Meanwhile, the victorious North Koreans did not stand idle. The same day that Seoul fell, 28 June, elements of the enemy's 6th Division started crossing the Han River west of the city in the vicinity of Kimpo Airfield and occupied the airfield on the 29th.

The N.K. 3d Division, the first into Seoul, was also the first to carry the attack to the south side of the Han River opposite the city. It spent only one day in preparation. North Korean artillery fire which had fallen on the south side of the Han sporadically on 28 and 29 June developed in intensity the night of the 29th. The next morning, 30 June, under cover of artillery and tank fire the 8th Regiment crossed from Seoul to the south side of the Han in the vicinity of the Sobinggo ferry. Some of the men crossed in wooden boats capable of carrying a 2 1/2-ton truck or twenty to thirty men. Others crossed the river by wading and swimming. These troops drove the South Koreans from the south bank in some places and began to consolidate positions there. But they did not penetrate far that first day nor did they occupy Yongdungp'o, the big industrial suburb of Seoul south of the river and the key to the road and rail net leading south. General Church directed General Chae to counterattack the North Koreans at the water's edge, but enemy artillery prevented the ROK troops from carrying out this order.

The enemy's main crossing effort, aimed at Yongdungp'o, came the next morning. The 4th Division prepared to make the attack. For the assault crossing, it committed its 5th Regiment which had been in reserve all the way from the 38th Parallel to Seoul. The 3d Battalion of the regiment started crossing the river southwest of Seoul at 0400 1 July, and upon reaching the south side it immediately began a two-day battle for Yongdungp'o. The remainder of the 4th Division followed the lead battalion across the river and joined in the battle. Yongdungp'o fell to the division about 0800 3 July. ROK troops waged a bitter battle and North Korean casualties were heavy. The enemy 4th Division lost 227 killed, 1,822, wounded, and 107 missing in action at Yongdungp'o.

My impression is that the city center is north of the Han river, so the North Koreans did not need to cross the river in order to take (the important parts of?) the city. Blowing up the Han river bridges essentially meant giving up Seoul.

Not the answer you're looking for? Browse other questions tagged tanks korea korean-war north-korea rivers or ask your own question.

11
How did an unditching beam work?
10
Why did South Korea (and the UN) accept an armistice line that put Seoul in artillery range of North Korea?
0
How did the Chinese Civil War avoid becoming another Korean War?
1
Did American POW’s get manipulated into cooperation in Chinese camps during the Korean War?
2
How many people were fighting in the North Korean Army in peak strength in the Korean War?
3
How could someone avoid US military service in the early 1950's?