Why was wearing an orange lily so offensive as to warrant assault in Ireland in 1845?

So, I came across this article in the 03 July 1845 edition of the Freeman's Journal, a newspaper out of Dublin Ireland. The article talks about an incident in which Thomas Short was assaulted by a 14-year-old boy named J. O'Brien. Then, a Dr. Kelly questions Short. I believe he's the magistrate/prosecutor. During his questioning of Short, he blames the assault on Short's wearing of an orange lily, and he claims Short should have known that wearing the lily would have resulted in giving offense to others. Short claims he did nothing to warrant his being assaulted. Dr. Kelly blames the entire incident on Short.

Now, I've tried to look up why orange lilies are offensive but I can't find much. This site says "The most extreme meanings of this flower are hatred and disdain", so maybe that's all it is. I also found the Orangemen, who are a religious group, so I thought maybe it could be some sort of religious tension, but I don't see that orange lilies are in any way tied to the Orangemen.

So, the only thing maybe relevant is the flower standing for hatred and disdain. But this does not explain why wearing one on yourself would warrant the assault of another. So, the question is, why were orange lilies so offensive in Dublin in July of 1845. 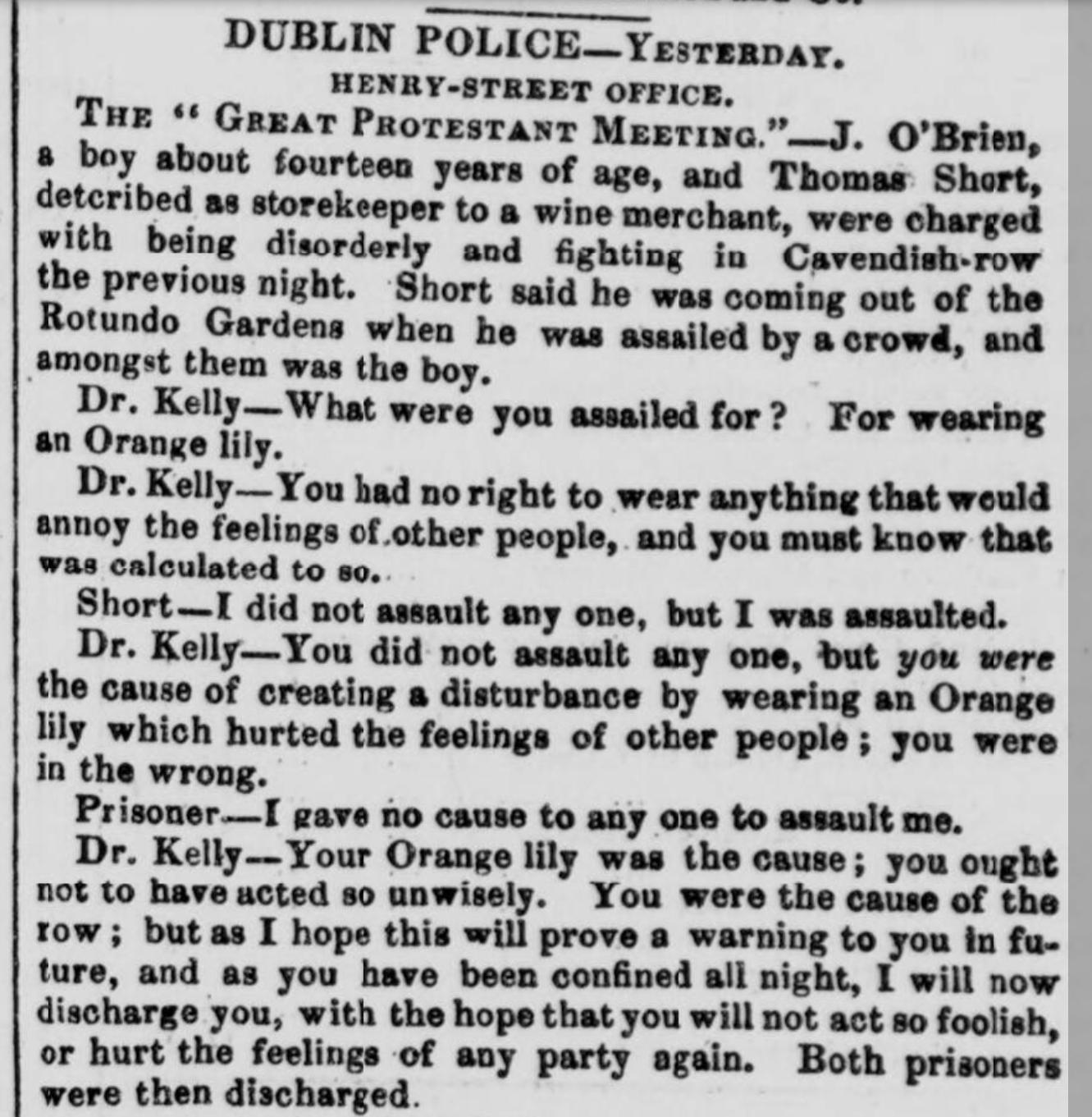 1845 in the Uk, particularly Ireland, was a year of heightened Protestant versus Roman Catholic antagonism. This is because the government of the UK, with Sir Robert Peel as Prime Minister, had proposed an increase in government funding to St Patrick's Roman Catholic Seminary at Maynooth, near Dublin.

Since 1795 this had been funded by the government to train Roman Catholic priests. Dublin University already trained Protestant ones for ordination in the Church of Ireland. By 1845 Maynooth was in need of significant repairs. Sir Robert proposed to increase the annual grant from £9,000 to £26,000, and to provide a further one-off sum of £30,000 for repairs etc.

This provoked outrage and opposition amongst many Protestants in all parts of the UK and anti-Maynooth conferences, called Great Protestant Meetings, were held in London in May, and in Dublin in June. A petition of over a million signatures opposed it.

The earlier 1840s saw a campaign for the Repeal of the Union, that is for Ireland and Great Britain to have their own separate parliaments again. This was also a divisive issue, being seen by Protestants as a threat. Sir Robert's Maynooth proposal was intended to convince people that the government was fair to Irish Roman Catholics, and so reduce demands for Repeal of the Union.

It is against this background that, on the evening of Tuesday, 1st July, 1845, Mr Short emerged from the Rotunda Gardens wearing an Orange lily, and subsequently got into a disorderly fight with a 14-year-old boy, Master O'Brien. Neither young gentleman seems to have been seriously hurt. Both were charged with being disorderly and fighting, but neither was charged with inflicting actual bodily harm.

What was Mr Short doing in the Rotunda in the first place, and why was he wearing an Orange lily? The date, July 1st, is a clue. That the newspaper article quoted by OP refers to an Orange lily, rather than an orange lily, is another clue that the flower was, in the context, understood to be a badge or symbol of the Orangemen.

The Rotunda is the Dublin equivalent of the Assembly Halls or Rooms found in many other cities. It is a collection of meeting rooms of various sizes.

The Batle of the Boyne took place on July 1st, 1690, in the Old Style Calendar, equivalent to July 12th in the New Style calendar. The final battle of the Williamite campaign was at Aughrim on July 12th, 1691 (Old Style). Nowadays, the 12th July is celebrated as the Anniversary of the Boyne with colourful parades in Northern Ireland, Merseyside and elsewhere; and orange lilies still feature in them.

In 1840s Dublin, the original Boyne date of July 1st was kept by the city's Orangemen. I haven't found any report of this in 1845, my access to old newspapers is limited without suscriptions. The Spectator in 1844 refers to a meeting of Dublin Orangemen in the Rotunda on July 1st. It says the oratory was of a violent description and that 2,000 persons sat down to tea. It also says banners and badges were rife.

So, it is extremely likely that a similar Orange tea took place on 1st July, 1845, in the Dublin Rotunda. This is referred to, perhaps ironically, in the article cited by OP as a "Great Protestant Meeting".

So, when Mr Short left the Rotunda, and emerged fom the Rotunda Gardens around it, he had just attended an Orange celebration and this was clear to see by the fact he was still sporting his Orange lily. In the heightened tension of the time, especially, this annoyed some of the crowd. These had, quite possibly, gathered there to express their opposition to the Orange event.

Quite what happened next is not clear. Mr Short cannot have been violently attacked by a mob, or he would have been seriously injured. Perhaps the boy attempted to grab the lily. The police, who must have been aware of the situation, seem to have intervened very quickly to arrest both of them, and so prevent any widespread disorder.

This, I hope, gives some context to why Mr Short emerged from the Rotunda Gardens, on July 1st, 1845, sporting an Orange lily, and why this might have led to some kind of fight between him and 14-year-old Master O'Brien.

It has nothing to do with the flower, and everything with the colour. In the Republic of Ireland, the wearing of orange is frowned upon. The Orangeman or Orangeorder, are supporters of William III of Orange.

The colour of the House of Orange-Nassau is, not surprisingly, orange. Throughout the centuries, adherents of the prince wore bands of orange on their clothing. That goes back to the first prince of Orange (William the Silent) until today. The Dutch flag has, on royal occasions, an orange pennon on top. The Dutch national sporting teams usually wear something orange.

William III was the Dutch protestant prince who became king of England. He was invited by the protestant elites, but to be sure, he brought the whole Staten Army with him. We can debate whether William was a conqueror or just doing what he was invited to do. There are good arguments for both positions.

However, this was clearly not the case in Ireland. He went there to squelch riots and revolts, and that he most certainly did. Acquiring a reputation close to Attila the Hun on the way.

Ireland was, and still is, a majority Catholic country. William was protestant, Dutch reformed. A kind of strict Calvinist. People who are known for the strict adherence to the bible as they see it. William used the best and most reliable troops he had to stamp out the rebellion, which were his Dutch troops. They committed what we today would call massive war crimes.

William eventually died, but his adherents remained. Parades by the Orangemen in Northern Ireland greatly contributed to the troubles. Walking around in Ireland wearing orange is close to wearing Nazi regalia in Israel and wondering why you are beaten up. 1845 or 2020 makes little difference.

Political commemoration is a contemporary political act. While the British State incorporating Ireland claimed to have rule of law it’s responsible government was localised, corrupt, and imputed on criminal individuals their acts of speech such as dress or flower wearing.

Orangist Protestant commemoration uses controversial political acts such as marching in offensive/commemorative clothing through neighbourhoods where such marches, such as Catholic Irish Nationalist neighbourhoods, would be liable to cause extreme offence associated with past extra-judicial murder for example.

While the UK was dominated by CoE, CoI and Scottish Protestant churches; it governed for all by this era and JPs and Magistrates could be appointed, even in Ireland, who would consider an attempt to incite riotous violence against the peace as of a greater threat than an Irish Catholic sconning an individual Orangeman. This is because the British state was non-homogenous and JPs/Magistrates could have personal views. This is because the British State had interests that while often in alignment with Orangemens’ were not wholly identical: the price of repressing yet another Irish insurrection or revolution was not necessarily worth the right of a spoiling clod to wear a flower so he could punch another man back.

Not the answer you're looking for? Browse other questions tagged 19th-century ireland newspapers 1840s or ask your own question.

7
When was divorce made illegal again in Ireland?
11
Why did Robert E. Lee stop offensive maneuvers?
10
Why did the Protestants in Ireland in the 1800s not want Home Rule?
8
What calendar was used by the kingdom of Ireland?
16
How common was banditry in 16th & 17th century Great Britain and Ireland?
12
Why was Northern Ireland mostly peaceful from the late 1920s to the mid 1960s?
5
Why does Northern Ireland not include the counties Donegal, Monaghan and Cavan?
3
Why did Western Christian monasticism really take off in Ireland?
4
What was the likely death toll of the Tudor invasion of ireland?