Are there pyramids at Sternenfels?

The author Frederick Dodson in his rather strange book "Extraterrestrial Linguistics" (2020) makes the claim that several pyramids have been excavated in the German town of Sternenfels. I have been unable to find any reliable source to confirm this, though there are mentions on what appear to be amateur / crank websites in both English and German. I haven't found any counter claims, either, which suggests the pyramid notion may be a niche one.

Dodson's photographs show some stone walls that one assumes are genuine and possibly ancient, but I can't see anything that proves they were part of a pyramidal structure.

Are these mysterious "pyramids" real or just something concocted by cranks?

There are certainly no 'pyramids' at Sternenfels. There are some man-made alterations to the landscape, but while they are claimed sometimes to be pre-historical, most available reliable info indicates those traces to be of historical time origin from this area, when it was being used as a quarry. Note that the 'pyramid'-theories claim this to be 'a pyramid within a quarry'.

The village Sternenfels — translated: 'Star Rock' — is said to more or less openly 'encode' its 'pyramid past' in its coat-of-arms:

Of course, the 'modern' version is based on the coat-of-arms of the local nobility, more or less in the form just shown since 1684 (offical for the village since 1964), and giving the whole village the name of the noble family that itself was named after its the new castle Sternenfels, after calling themselves previously: ~'Lords of Kürnbach'.

Slight problem for this 'pyramid in coat-of-arms' explanation: the noble family Sternenfels has used this version: 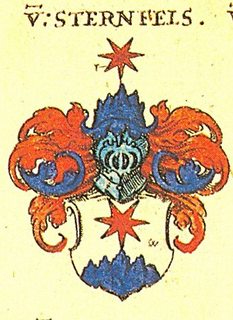 Now, the official archaeological explanation for the structures found is that these are remnants of the local, previously quite productive quarry. For Stubensandstein, used among other things for building the name-sake castle… The village itself explains its historical roots as quarry supplier since Roman times.

And an amateur, 'private', 'archaeologist' uses an official map of the area called 'Zwerchhälde' (which might be translated as ~little or 'Dwarf' heap) to add his own explanations for the geological features found: 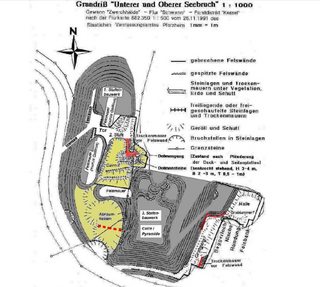 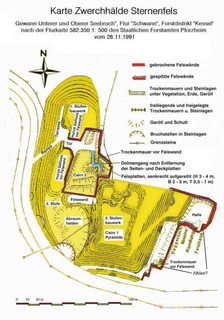 For those inclined to look it is found via via Google Earth: coordinates 8.83975,49.05305000000001,0 or GMaps where the spot is called "Celtic Ruins and Excavation site", with some pictures. Another round of pictures taken 2013, and a video showing the powertool excavator of that 'pyramid initiative' (self-title_ "IG Pyramide Sternenfels", which claims this to be a cairn…) in action (~10 minutes)…

Although this 'K Walter Haug' (project website of this 'citizen scientist', who likes to dig with other amateurs dowsers and excavators) likes to describe this not as pyramid at all, but a 'Cairn' (WP-link-to-word-meaning, src1, src2). If there is anything pre-historic in the surroundings of this site, various amateurs, treasure hunters and ordinary gold diggers seem bound to damage or destroy any possible future finds in that regard. (Petition to the local mayor of the village detailing some fights over who gets to do what on that mount indicate: 1. some unprofessional digs and destruction already in advanced progress, 2. either 'unfortunate' or 'convenient' 'disappearance' of 'evidence'…)

The so far apparently only one picture of that site that made it to Wikimedia Commons: 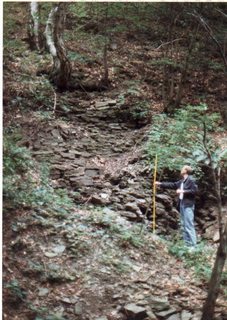 To quote proponents of this outlandish theory to speak for themselves:

Now no one can deny the buildings and dismiss them as profane spoil heaps in quarries. From the very beginning, the walls and passage portals were recognizable to everyone. Now whole sections of walls of colossal height, steps, stairs and the stairway to a portal are exposed, which, however, is massively hidden by enormous walls.

That is the peculiar and at the same time fascinating thing: Our highly cultural buildings are largely hidden in ancient quarries. There are various phases of subsequent use, which is why archaeologists are unable to recognize the original conception at first glance. But unfortunately they could not bring themselves to a detailed study of these constructions until today. In fact, they have not invested a single minute of work until today. Everything remained with the discoverer.

So our work is pure private research. We do not receive any support from the state. We finance our budget through donations, book sales and lectures. IG Pyramide Sternenfels, founded in May 2011, is therefore an ideal association without any commercial purpose.

Since our step pyramids and cairns (the technical term used in Europe for this type of prehistoric structures) are located in quarries, they are not recognized by the Provincial Archaeology of Baden-Württemberg. The enormous structures, one could call them in German also Kärner (ossuary), are officially considered as walled spoil heaps! Geological explorations, however, may be carried out by anyone in quarries.

We have the big problem that our numerous discoveries and excavation results are not acknowledged by the academic world.

Not the answer you're looking for? Browse other questions tagged archaeology pyramids germanic skeptical or ask your own question.