Is there any conclusive evidence of where the Tarim Mummies originate from?
What were these "westerners" doing in China?

The theories I have heard are that they are the forebearers of the Kazaks or the Khazars. Is there any good conclusive evidence for either of these claims?

The only information I could find indicates that these early settlers were Tocharians, who were Caucasian herders who most likely kept moving further eastward in search of trade or grazing lands. There are other findings that indicate some of the later mummies were also Caucasian but most likely came from European settlers who were pursuing trade along the Silk Road to China.

That's a really good question, and even just a few years ago we didn't really have anything approaching a conclusive answer.

However, an analysis of mitochondrial DNA extracted from human remains recovered from the Xiaohe cemetery was published in 2015, and we now know that the answer is complicated, but that most of the early populations probably arrived from the steppes of southern Siberia at some point in the early Bronze Age, rather than as European settlers travelling the Silk Roads to China.

As you quite rightly said, since the Tarim mummies were "re-discovered" by the Xinjiang Archaeological Institute in 2000, two main theories have developed to explain their origin.

The first theory suggested that the earliest settlers in this region were nomadic herders who had migrated from the steppes of Russia, Siberia and Kazakhstan. The other theory suggested that people first travelled to the region from Bactria (roughly, modern Uzbekistan, Afghanistan, and Turkmenistan).

Unfortunately, the archaeological evidence was inconclusive. The extremely arid conditions resulted in unusually good preservation of organic remains, so we really do have a lot of evidence. In cases like this we usually rely on similarities between the archaeological evidence from different sites to suggest links between ancient peoples. This might include burial practices, the types of animals being farmed, or even (where it survives) clothing. In this case, we have all of the above, but the evidence was inconclusive. Some evidence supported one theory, and other evidence (from the same site) supported the other.

Similarly, earlier attempts to determine the genetic origins of the population of the Tarim Basin, based on human remains recovered from the Gumugou cemetery were also inconclusive.

The investigations were the subject of a National Geographic program titled China's Mystery Mummies, filmed in 2007.

In a series of papers from 2010 to 2015, Chunxiang Li of the College of Life Science, Ancient DNA Laboratory, and Research Center for Chinese Frontier Archaeology, at Jilin University, together with a number of colleagues, published a series of papers that presented the DNA evidence recovered from human remains from a large number of individuals from the Xiaohe cemetery complex. That complex dates from the Bronze Age, about 2000 BCE, and appears to have been in use for almost a millennium.

20 individuals from the earliest layers of the cemetery complex were tested. This revealed that

"The dominant haplogroup, in the Xiaohe people was the East Eurasian lineage C"

which would correspond with an origin in Southern Siberia. However, the analysis also revealed that:

Obviously, this was of particular interest, and after further analysis, the authors concluded:

The authors then analysed samples from later burial layers. Although the dominant haplogroup was again haplogroup C, the evidence:

"confirmed that the origin of the mitochondrial lineages is more widespread". 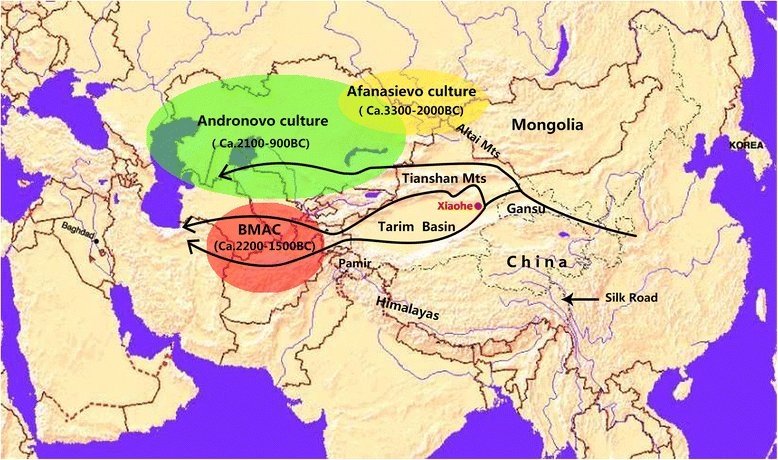 Overall, however, the authors conclude that the dominance of the:

So, for now (in the absence of contradictory evidence from other sites), it seems that we can say with some confidence that the ancestors of the Tarim mummies originated in the steppes of southern Siberia.

Not the answer you're looking for? Browse other questions tagged ancient-history china archaeology or ask your own question.

8
To what extent was China unified?
9
Are the Ramayana and Mahabharatha exaggerated stories or pure fiction?
13
When was tofu invented? Was it specifically for vegetarian consumption from the beginning?
13
Is there a relationship between the Pelasgians and Sea Peoples?
3
Were the Chinese Warlords backed by other countries?
11
Are any archeological remains found from the Yellow Sea, China
2
The history of toys: Who invented the first porcelain dolls?
1
Are there any theories of Tiglath Pileser III's origins?
11
Which 'evidence' is there for a claim that 'Chinese discovered America in 636'?