Why were the West African islands uninhabited?

I'm curious about the history of two West African Archipelagos, specifically the Cape Verde islands and São Tomé and Príncipe. These islands were both uninhabited prior to the arrival of Europeans despite being very close to the African continent. We can contrast this with the situation in East Africa, where Zanzibar, Comoros & Socotra were all inhabited before their re-discovery by Europeans; even the Seychelles have tombs which point to evidence of pre-habitation. This doesn't seem to be a matter of ocean current, since the Guinea Current runs directly through both island chains. 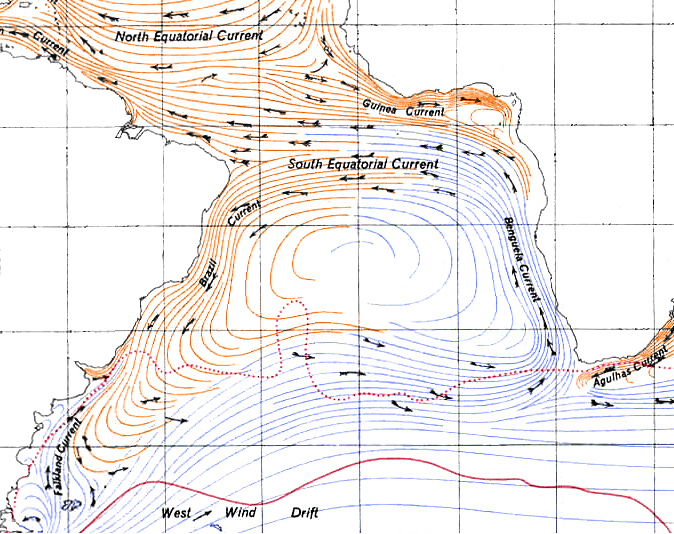 First off, I'd ask you to look at my answer to a similar question about Madagascar and New Zealand. In particular it points out that historically uninhabited landmasses got populated by humans in one of 3 ways.

In fact, one could probably extend #3 to say that pretty much every culture making use of method #3 above prior to the Renaissance was either Austronesian or Norse. There's probably some exceptions, but none come immediately to mind. A farming culture might have the capability of devoting enough resources and specialists to support open-ocean navigation and colonization, but still most cultures have better things to do.

So of the islands on the East side of Africa you mentioned:

The West side of Africa islands you mention on the other hand are all hundreds of KM from the African coast, and the Austronesians and Norse are quite inconveniently far away (and would have to go way out of their preferred latitudes to get there).

The Cape Verde islands are at the Southern edge of the Sahara and fairly far out to sea - traveling to the islands would require a multi-day deep sea journey of the kind that were rare prior to the age of sail.

Importantly, Gambia is South of islands, so the Guinea Current works against any potential explorer from this direction.

Any explorer from coming from Gambia would need to travel 450 miles out to sea - for no apparently gain - going against the prevailing current. It's not hard to see what this did not occur.

From Casablanca in Morocco, it is nearly 1,500 miles to the Cape Verdes. From the "father of danger" Cape Bojador referenced in this question, it's still 800 miles. These represent multi-day, deep ocean voyages with no hope of resupply from the African coast. Lack of food and water would be serious obstacles.

The inability to fight the currents to return home and report a successful crossing were also significant obstacles. If no one returns to tell tales of successful trading or fishing, it discourages people from following in the future.

So the inhospitable coast near the Cape Verde, their distance from land, and the prevailing currents all made it difficult for explorers to find the islands.

72
Why Were Madagascar and New Zealand Discovered So Late?
32
Why could Phoenicians sail past Cape Bojador but later Europeans could not until 1434?

40
Why are many African nations poor?
6
Resources on the History of African Civilization
6
When was the African National Congress added to the US terror list?
8
Why does the Star of David feature on these African coins from 20th century?
22
Why were La Réunion and Mauritius uninhabited?
9
Was African slave trade ever directed towards Europe? If not, why?
4
Has Morocco ever claimed ownership of the Canary and Madeira islands?
12
How have African countries kept the boundaries divided by colonists and countries unified for decades, despite the many ethnical groups and conflicts?