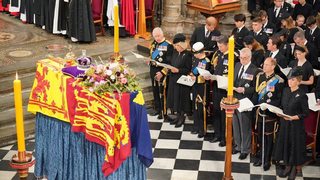 Is the blue sash related to the bearing of a sword, or an unrelated insignia? And, for how long has it been customary (or at least accepted) for women members of the British royal family to wear swords to solemn ceremonies such as state funerals?

What appears to be missing from both question and answers is the fact that the Princess Royal is breaking ground for (royal) women.

If anyone has seen older videos of the Remembrance Day services at the Cenotaph, only male members of the Royal Family laid wreaths, in dress uniform, complete with sword, with the sole exception of Queen Elizabeth II, who laid the first wreath on behalf of the nation — but always in civilian dress. The other Royal ladies watched from the windows of the Foreign Office. (AFAIK, the only times the late Queen wore uniform was when she took the salute at the Trooping of the Colour, on horseback. When she took to using a carriage, she wore civilian dress.)

During her life Princess Anne has held various honorary military ranks, and the integration of women into the military, including the bearing of arms, presumably aided the Princess's challenging of gender stereotypes. (If you watch recent Cenotaph ceremonies, Her Royal Highness (HRH) is always handed her wreath by a female aide-de-camp (ADC), which would scarcely have been possible at one time.)

Princess Anne has broken gender barriers in other ways: when Queen Elizabeth made her a Companion of the Order of the Garter, Anne said she would not be a Lady Companion, but a Knight Companion — KG instead of LG.

In some ways the Princess Royal's more visible presence in traditionally male military roles reflects the changes in society. Female soldiers, sailors etc on parade carry the same arms as the men: the Princess is simply a high profile example of this.

The blue sash is an insignia of The Most Noble Order of the Garter, (https://en.wikipedia.org/wiki/Order_of_the_Garter) the premier British chivalric order. It has no bearing on formal dress uniform or the wearing of a sword

Princess Anne, The Princess Royal, wore a Royal Navy uniform to the funeral in virtue of being an Admiral of the Royal Navy (since 2012, having previously been Rear Admiral since 1993 and Vice Admiral since 2009). As expected of any officer of that rank in dress uniform, she wore an appropriate sword. As a commenter below notes: without it she would have been "improperly dressed".

Well one solemn occasion is the knighting of knights. This requires a sword. The sword used by the late Queen Eizabeth II is the sword she inherited from her father, George VI, when he was Duke of York.