Which British town or city is recorded in this 1890's YouTube video?

I have came across a YouTube video titled "The 1890's ~ Amazing Rare Footage of Cities Around the World". (2 mins)

I was just wondering if this was the earliest filmed footage of Blackpool pleasure beach? Or is it from elsewhere in Britain?

The movie 'scene' in question (alternative YouTube video) was an entire early short film — 39 seconds long — and is titled simply (as on Wikipedia here) "A Switchback Railway" from 1898 by Victorian film maker Robert William Paul. And sadly this is almost always described with very little statistics or other details as merely "at a fairground" or at IMDB as:

"Beguiling scene of adults frolicking on a small-scale roller coaster in an urban park." 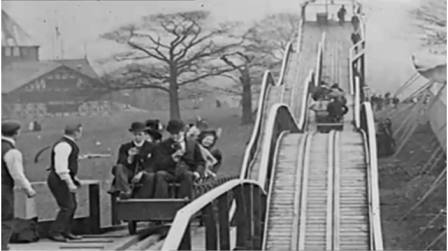 Although, one local history outlet describes it as filmed nearby to the then in 1896 newly established film studio of R. W. Paul, in Muswell Hill at the Alexandra Palace, nicknamed 'Ally Pally', so in North London at 51°35′38″N 0°07′48″W.

"Amazing rare footage of Ally Pally's switchback railway. Made by north London film pioneer R.W. Paul in 1898. In the background, you can see Blandford Hall (known at this time as simply the Banqueting Hall). See a still image on Harringay Online at https://hgyol.in/3cPQAla"

Interestingly, Wikipedia omits this movie from its list of Films released in 1898 — although it is, as seen above, featured with its own dedicated lemma page — and to be found on Wikimedia Commons.

6
Which figure is this a statue of?
8
What are these items in this 16th century plan of an English town?
8
Which army uniform is this (2nd Boer British or WWI US)?
18
What ship is this and which military campaign?
51
Is this artwork (used in a video game) real?
3
What is this Victorian era British uniform?
4
Which person is portrayed in this statue?
14
Which Scottish regiment is the Queen inspecting in this photo?