The following meme arrived in my inbox. 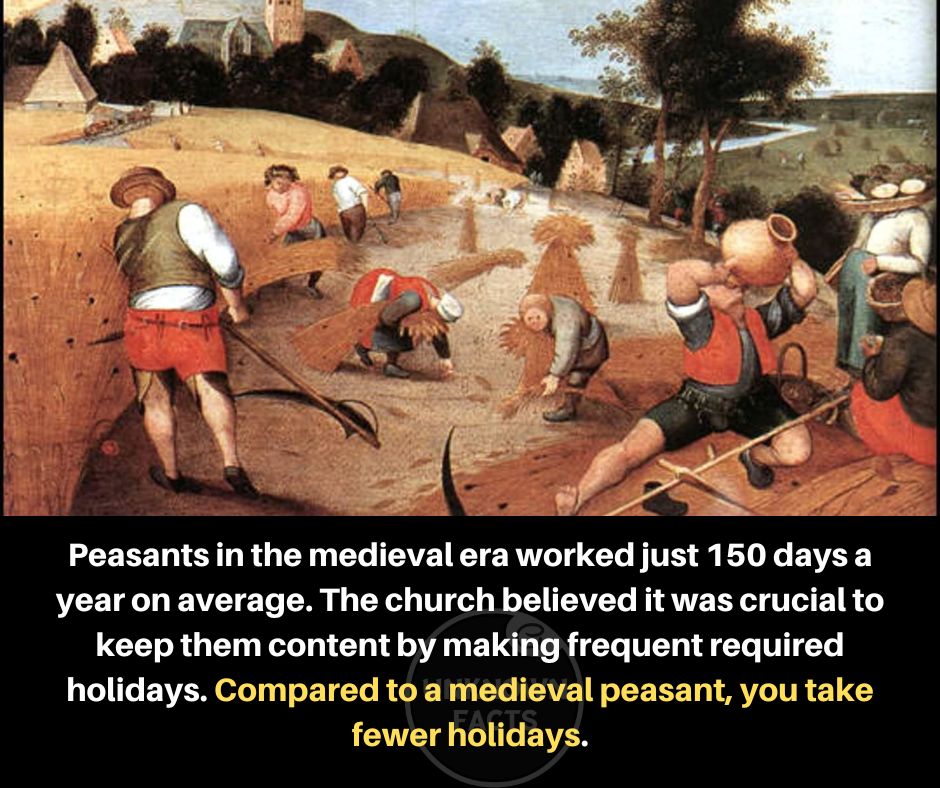 Peasants in the medieval era worked just 150 days a year on average. The church believed it was crucial to keep them content by making frequent required holidays. Compared to a medieval peasant, you take fewer holidays.

I'm aware that "Medieval" is loosely defined and covers the best part of a thousand years and at the very least an entire continent, but is there any time and place in Medieval Europe where this might have been true? Was it generally true?

I'm also aware of the very large number of saint's days recognized by the church, but my understanding is that they were not all "holidays" in the sense of people not working on them.

Probably not. The one economist this number can be traced to now says its a huge underestimate.

In 1986 economist Gregory Clark wrote a working paper that (according to citers) contained this estimate. It doesn't appear he published it, but it got cited. He actually did for real publish a new paper in 2018 raising that number up to an estimate of 250-300 days. That's quite a revision!

However, in the meantime a popular book was published by a sociologist that used that earlier lower number of 150. "The Overworked American: The Unexpected Decline of Leisure". Since then this number went wild on the internet (likely because its a shocking number, or perhaps because people like that number and want it to be true).

Whatever the reason, it seems I see this on Twitter (largely because someone I follow is debunking it) at least once a week, often with a variant of that picture. Its happened enough that since April there's been a Twitter community note for it: 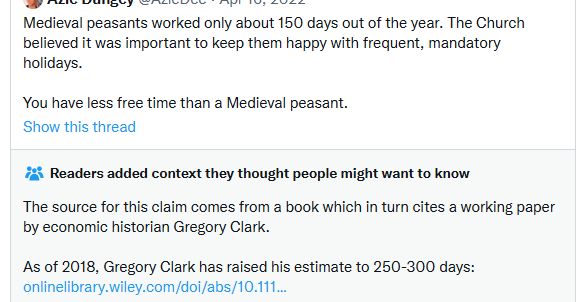 User u/LordEiru on r/badhistory did a deep dive on this. The whole story is worth reading (although a bit aggressive for my tastes). They did include several links to the sources involved.

The Clark citation is by comparison more fair and accurate. That is not to say it is without issues, however. First, the citation is to a working paper that does not appear to have ever been published fully – Clark himself does not list it anywhere on his publications, and other attempts to find it only make reference to it having been cited in Schor’s work. Nonetheless, it would be reasonable to ask if work from 1986 is still an authoritative source on the subject or should be used as evidence. The answer is very hilariously no: Gregory Clark doesn’t believe that Clark 1986 is correct. The Atlantic published an article on the debate over the working hours subject on May 6th, 2022, in which Clark is quoted as rejecting the prior conclusion and noting his current work on the subject instead estimates nearly 300 days of labor per year – quite in line with the 308 days estimate by Keynon.

Here's a link to the Atlantic Article where Clark's work is mentioned. Sadly, being an overworked peasant myself, I'm stuck soundly on the wrong side of its paywall.

What does "Work" mean? Quite likely you worked 150days for the land owner, for which you earned the right to work "your" land for your own benefit. Then you still had to spend other many days on your own land to raise your own food etc as well as take part of your own time to fix or build your house, create resources to pay for various other things you need.

So converted to today's economics, the 150 days of work were effectively paying your land rent/mortgage and taxes. You'd have to work another 150 days to get the other things a modern job provides: resources for food, house (other than the land), etc.

The answer is, as usual when a meme is involved, a bit more complicated.

For starters (and as it was pointed out here numerous time in comments) it depend on what "day" is.

Meme says something like "you now work more than medieval peasant". Standard workday is 8 hours. Peasant worked - depending on time of year, and it was mentioned elsewhere in the topic - between 6-8 (in winter) and 16 (in summer, especially in harvest) hours a day, so it is important to define "day".

Even today, with mechanization and automation available, farming is one of the most labor intensive activities, so it's not a surprise that it have been much more so several centuries back - it could be as much as 200-250 days a year.

On the other hand, families back then also have been substantially bigger - not only there were usually three generations living in the same household, everyone worked until one literally couldn't; be it "not yet" or "not anymore". This means that same amount of work, split between 12-15 people instead of 5-6, could be done faster. This is very important, because traditionally farm land was rented from the landlord in exchange for any kind of payment: money, fraction of the harvest, work on landlord's fields, work for landlord directly or all combined. However, the payment due was from household, and not per person, thus more children meant more hands for fixed "amount" of work required by landlord (Serfdom and slavery in the European economy, 11th-18th centuries, ed. S. Cavaciocchi, Firenze University Press 2014.)

In addition, those were the times where religion and faith played far greater role in life than today, so any and all religious holidays were usually free from work - bear in mind though, that there is no such thing as a truly work-free day on medieval farm - which can be a fair number of days in a year.

Best yet, in some part the meme is correct - peasants on average didn't work more than the mentioned 150 days (or even less).

But basically until the end of the 16th century, mostly because later came climate change and yields decreased drastically, forcing farmers to increase the area of ​​cultivation, in effect often doubling their workload just to grow food. But wait, there's more. The duties of a peasant were multitude: from standing night guard in the landlord's manor, to transporting landlord's goods, make repairs to his household or to roads and bridges...

So this meme is a case of one having at least some truth in it - sadly, the rest of it is of the "in the good, old days of the golden age" of grandfathers' tales category, because in 18th century, for example, the number of days was usually more than 150. As usual, the poorest had the worst (yes, even then there were wealthy and poor peasant - difference usually was in having draft animals), who had to work sometimes even 600-700 days in a year... Not a good number, that. (Serfdom. The real history of Polish slavery, Kamil Janicki, 2021)

Probably. Other subsistence cultures (Philippines, Indonesia) even in the 20th century only worked at planting and harvest: the other half of the year wasn't worked.