What came before the Zamboni?

The Zamboni machine has become one of many people's favorite parts of Ice Hockey. Technically this device is called an ice resurfacer, but everyone just calls it a "Zamboni" after the inventer. 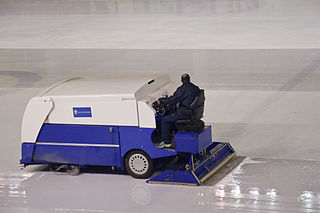 Frank Zamboni invented the machine over the period from 1942 to 1949 to help with the time-consuming task of resurfacing his ice rink.

I'm curious what came before this. The wikipedia page mentions ice being manually scraped and watered before, but also stresses how time-consuming this was. Presumably he could afford this as a business owner, but it was still enough of a hardship to motivate the hard work to develop the machine.

If it was really that bad, did a lot of people just not bother? Did hockey games not resurface at halftime (or ever?) If so, how was it typically done? Was there an earlier period where nobody bothered, but just let skaters deal with the ruts? I'd imagine a lot of skating was done on frozen lakes that would have been remote from unfrozen supplies of water.

There were several strategies for dealing with the problem of ice resurfacing before Frank Zamboni came along.

Just Let the Ice Get Bad: Before 1910, hockey games were played in two 30-minute halves. ESPN says "By the end of each half, the ice was full of ruts and covered in snow, and the game slowed to a walk." So eventually they switched to three 20-minute periods, allowing an extra opportunity to clean the ice, even though this severely slowed down the pace of the game. Even today, NHL hockey has longer stoppages of play than other professional sports, with two 18-minute intermissions as compared to a 12 minute halftime in NFL football and a 15 minute halftime in NBA basketball and FIFA Football. (I won't try to quantify how much downtime baseball has.)

Cheap Labor: To resurface a rank, you need to clear the snow. This could be done by handing out a lot of shovels. For example, at the UND Barn, "Young fans (in exchange for game admission) prepared for resurfacing by shoveling shavings and snow off the ice from the preceding period's action." Even in our post-Zamboni world, many NHL teams use teams of young women, so poorly paid that they can't afford winter clothes, to clean the ice between periods.

Other Contraptions: Tractors with ice scrapers were used in some rinks. After shavings were cleared, Zamboni (and presumably other low-budget rink operators) used what was basically a wheelbarrow and a hose to flood the ice. The more mechanically-minded managed to come up with better flooders. Returning to UND:

. . . a between-period entertainment (for those who weren't forced by the cold into the warming rooms) was watching him artfully resurface the ice with a pre-Zamboni apparatus he had cobbled together and which was pulled across the ice. It consisted of two barrels, one welded on top of the other, pipes, and valves that directed hot water to the ice through a canvas strip at the bottom rear of the Rube Goldberg contraption ("My barrel flooding outfit," Purpur called it). 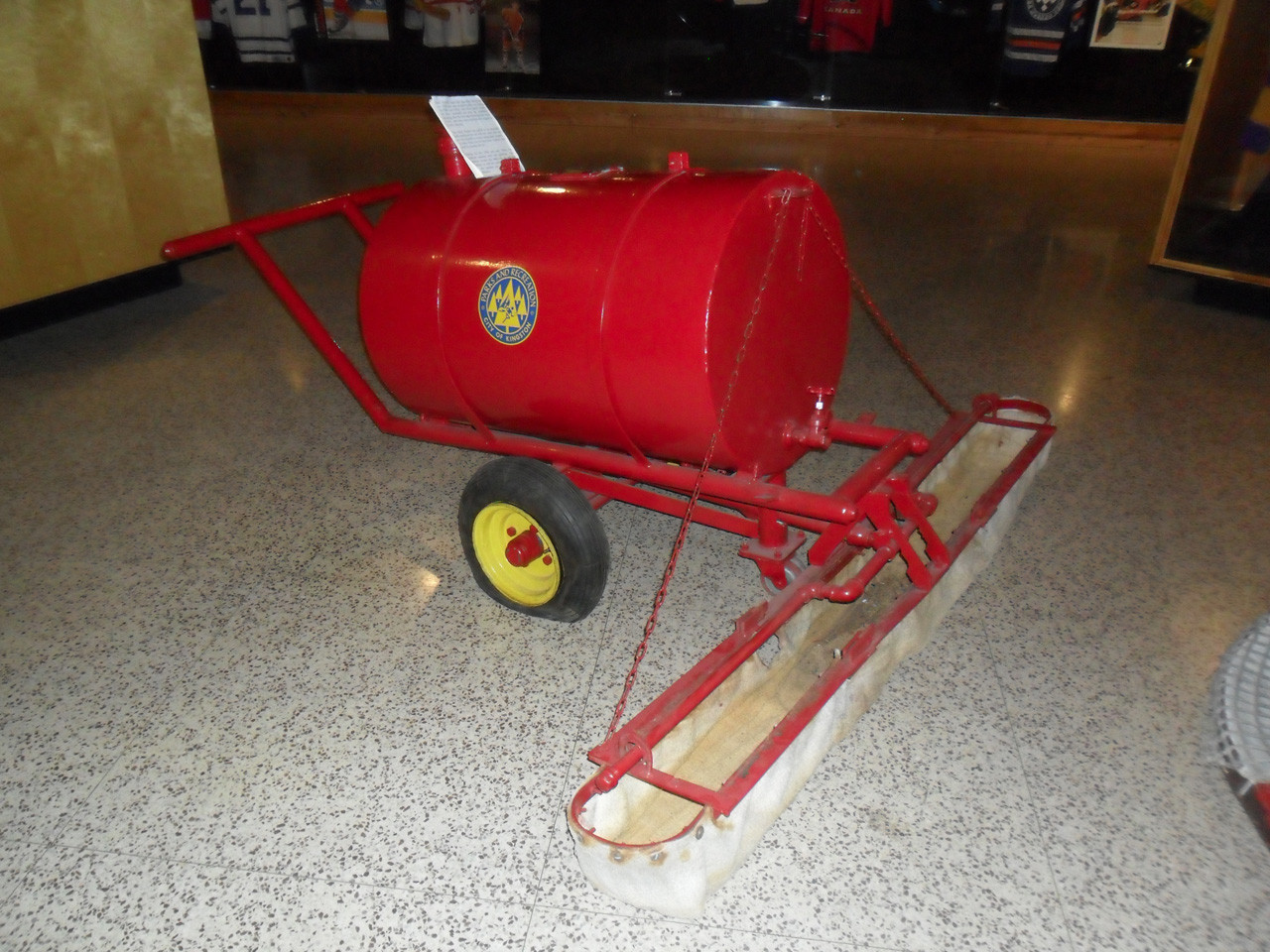 Zamboni first tried to outfit tractors with mechanical sleds, before realizing that he could combine the shaving, cleaning, and flooding machines into one by building off of war-surplus jeep chassis: 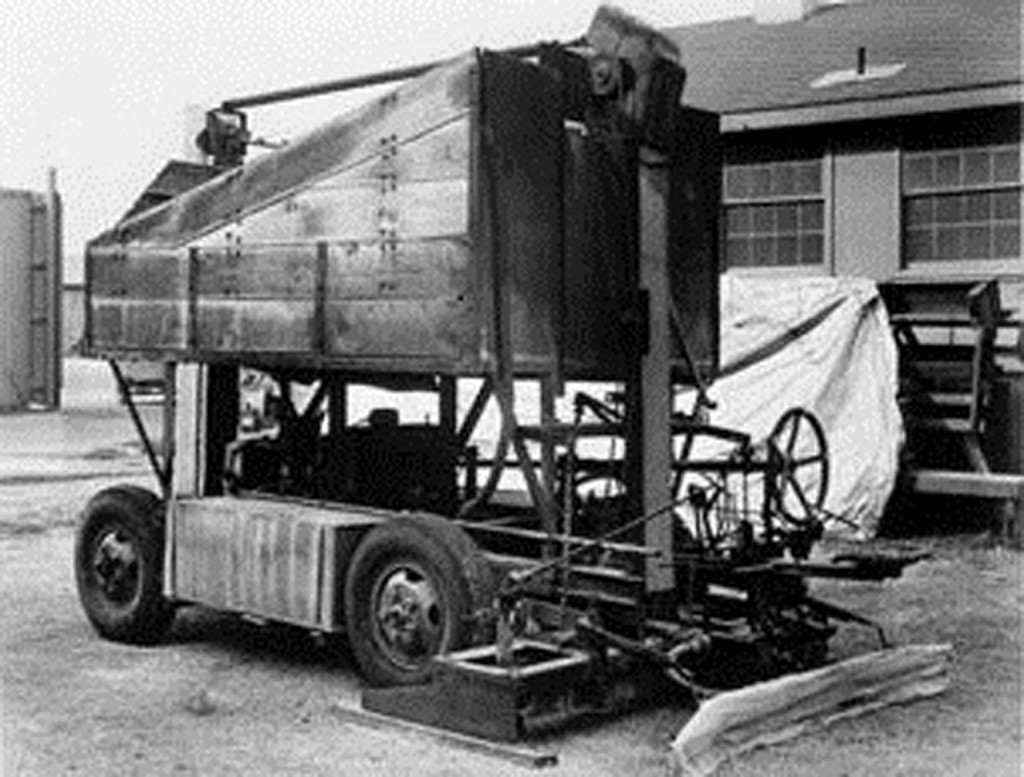 Clearly Zamboni's invention was effective enough that now nearly all rinks employ one. But there was enough amateur mechanical ingenuity in the first half of the century that I wouldn't be surprised if there were rink managers other than Zamboni and Purpur who were experimenting with their own shoestring resurfacers.

John Ceburn West, the late 19th century inventor of the Alligator http://en.wikipedia.org/wiki/Alligator_boat, the steam warping tug, also patented an invention that would carefully apply a layer of ice to roads.

It was very much like the modern Zamboni machine, with the minor variation of being horse-drawn and coal-fired.

It was never a success. Perhaps people disliked ice-covered roads?

But in much of Canada and in some of the northerly states, until the 1930's, when snow-plowing began to be common, in the rural countryside the only way for farmers in the winter to go to town was via sleigh or sledge or cutter, for which ice-covered roads were advantageous. Jingle Bells!

(I'm on road at the moment, hopefully not ice-covered, but will post details on the patent of West's invention shortly.)

In the British Ice Hockey League ca. 1948 at the end of the period a staggered line of white-dust jacketed men with wide brooms swept the ice - in step - marching really, until they had the surface cleared of loose ice which could be shovelled up by another work detail, then the waterers followed with squeegees. It was a rhythmic and almost hypnotic evolution, probably the men were all ex-service. I can't remember if it was done to music but have no recollection so it was probably silent! All part of the spectacle. Zambonis were a pale substitute.

Not the answer you're looking for? Browse other questions tagged sports or ask your own question.

15
What was done to improve the safety of jousts after the death of Henry II?
12
What is the oldest known international sporting event?
8
What rules of the ancient Roman game 'Harpastum' are known?
2
Have Paralympics been the specific target of boycotts?
13
What is Poosball, an early 1900s women's team sport?
11
What are the ancient origins of the Medicine Ball?
1
Why did Americans stop calling the Olympic basketball team the "Dream Team"?
9
What is the connection between the rise of modern football in the UK and the shortening of the work week?
1
Was there ever a type of powered model car/vehicle racing, where the cars were in no way controlled, and were all on the one single shared track?