Did the Minoans practise human sacrifice?

Excavations on the hill of Kydonia, near Chania in Crete, where the third largest palace of the Minoan civilization was, revealed a small area fenced by rocks in the yard, with many animal bones and among them, the remains of a young woman. Another skeleton, of a young man, was found in a room in the "temple" of Anemospilia, in the northern end of Mount Iuktas, near Heraclion.

These finds have created a lot of discussion about human sacrifice in ancient Crete. Do we have conclusive evidence that the Minoans practised human sacrifice?

This is a matter of debate, the Anemospilia findings have been controversial since the site was first excavated in 1979, and the Kydonia findings are quite recent; the sceleton was discovered in 2010. Insofar there has been no conclusive study of the Kydonia findings, the excavations are on going and Maria Andreadaki-Vlazaki, the archaeologist responsible and General Director of Antiquities, has mentioned that it's still too early to tell.

Peter Warren first suggested human sacrifice as a possible interpretation for the skull fragments that he discovered in 1967 in the Early Minoan settlement in Fournou Korifi:

Just beside P574, to the south-west, lay the strangest find from the site, fragments (about a quarter in all) of a human skull. Like the pots the bone was burnt by the destruction fire, but the pieces were identifiable as those of a young adult male... No other bones, human or animal, were found. How is this skull to be interpreted? It was certainly not the remains of a burial, nor could it be a last inhabitant who had failed to escape at the moment of destruction; in both cases other bones would have survived. The skull can only have been an object as such, deliberately situated near the tripartite structure with central hearth. Thus the possibilities of ancestor worship or even human sacrifice cannot be ruled out.

The discovery of the bones of four children in a Late Minoan house near the palace centre of Knossos reinforced Warren's belief that the Minoans practiced human sacrifice. Both Warren and Nikolaos Platon supported the human sacrifice interpretation, while other scholars argued that the finds suggested a secondary burial. The more sensational interpretations included cannibalism: 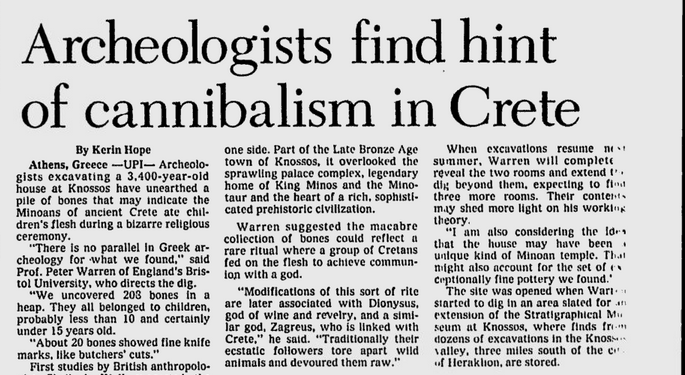 Matters are even more complicated with the remains of four bodies that were found in Anemospilia. The building's design is unusually symmetrical and its function can't be deduced with certainty, although most authors call it a temple. Part of the uncertainty comes from the fact that it was partially destroyed by an earthquake and/or a fire in the 17th century BC and part from its unique - for the era - design. To make matters worst, Yannis Sakellarakis, who first excavated the area in 1979, didn't publish a report of his excavation.

Sakellarakis theorized that the one body, a young adult male, was the victim of human sacrifice and the other three bodies were the priests that were conducting the ritual, killed by the earthquake, in what could only be described as an extremely bizarre occurence of events. The young adult male was found on top of what appears to be an altar, with a knife resting on top of him, and Sakellarakis believed that the ritual was a panicked attempt to satisfy the gods as the seismic activity was getting stronger. The following is a picture of the remains of the alleged victim as it was found: 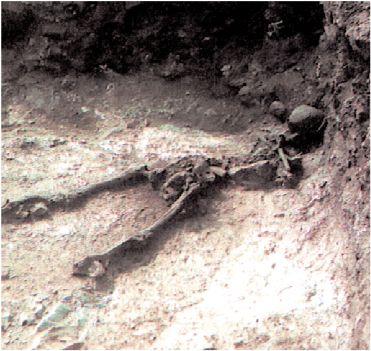 Dennis Hughes is particularly doubtful of the claims made by Sakellarakis. In Human Sacrifice in Ancient Greece, he argues that the knife found on top of the body is actually a spearhead and that it could have easily dropped on top of the body from, for example, a shelf during the earthquake (pages 16-17). He is less critical of Warren's interpretations, and even presents some arguments in favour of Warren's interpretation for the childrens' bones found in Knossos (page 22). Initial dating puts the finds at the end of the palace style period, the 14th or 13th century BC, an era when the Mycenaeans had moved into Crete. While there are certainly several evidence that suggest animals were regularly sacrificed in the courtyard, I'm afraid we can't yet conclusively answer if the human remains also belong to a victim of sacrifice.

Two thoughts, the first being that the skeletal type of the tall man at Anemospilia was non-Cretan, and dating the presence of Mycenaeans on Crete to when they took it over discounts the possibility of individuals or groups visiting earlier. These visits are entirely probable. Secondly, knife or cut marks on a body/bones do not a feast make. In the absence of crushed bones to get the marrow out, which seems to be present in most real cannibal finds, it can be a sign of defleshing the dead in preparation for burial. A practice done by many cultures, some even to this day. Some Native American Prairie tribes did it, some Indus cultures, etc etc. It seems that Cannibalism is far more sexy a headline than Defleshing ;)

This whole issue highlights a general problem with the fascinating world of Minoan archaeology- because we have no written record of this culture archaeologists are unwilling to interpret anything in the archaeological record, even if it is staring them in the face. The Minoans also have had an uneasy time of it recently because of the increasing realisation of the fact they were not "Greek", and although vastly superior to the Myceneans are often passed over in favour of them because the Myceneans were "Greek" and therefore must be more important. The Minoans were definitely the dominant influence over the Myceneans, it was never the other way round. They predated them by many centuries and their culture has a long and complex evolution which almost parallels that of the Egyptians, who may have influenced them. The Mycenean culture has nothing like the same level of sophistication. Hughes is almost ridiculous in his refusal to accept the dramatic Anemospilia evidence - "Its not a knife but a spearhead" So? He was sacrificed with a spear. The knife/spearhead placed in the middle of the victims chest "accidentally fell off a shelf" What? Could be, but look at what was actually in that building friend.

You don't specify a time period. In general, ritual human sacrifice was widespread in ancient times before about 500 B.C.. As far as Crete in particular is concerned there is no reason to think it was any different than the rest of the ancient world and human sacrifice took place routinely. Mythologically, for example, there is the simple evidence of the legend of the Minotaur in which 7 girls and 7 boys were sacrificed to the Minotaur in the Labyrinth every year.

Unfortunately, due to social politics, it is difficult to get reliable research results on this subject. A typical problem is that many people do not want their country or ethnic group to be associated with human sacrifice or cannibalism, so evidence of such things happening tends to get suppressed or re-interpreted in a misleading way. During the pre-WWI period English and German archaeologists uncovered many examples of human sacrifice (in other countries of course) which led to the understanding by many that originally human sacrifice and cannibalism were universal. For example,

After WW2, especially, many countries have either kicked out foreign archaeologists or put them under strict controls to prevent them from publicizing "negative images" of the host country. This has led to a general suppression of evidence concerning human sacrifice.

Many archaeologists I suspect willfully suppress sacrifice findings, especially if the research is taking place in an area involving their own personal ethnic group. For example, I read one archaeological report concerning the excavation of a temple in the archaeologist's home country and right at the beginning of the report, practically in all caps bold letters it read "NO EVIDENCE OF HUMAN SACRIFICE WAS DISCOVERED DURING THIS EXCAVATION." And we can probably assume that if there had been, we definitely would not be hearing about it.

Not the answer you're looking for? Browse other questions tagged ancient-history religion ancient-greece human-sacrifice or ask your own question.

23
What cultures did, or do, perform human sacrifice on a regular basis?
7
Does a Baal human sacrifice statue from Carthage exist?
10
What actual proof is there for Carthaginian child sacrifice?
12
Did the Delphic oracle speak gibberish?
18
Did the Vikings practice voluntary human sacrifice?
4
Why did some ancient societies make human sacrifices but others did not?
0
What is the likely ethnic origin of the Minoans?
21
Did horse sacrifice persist in Christian Europe?
6
What was the difference in the minds of the Romans between human sacrifice and gladiator games?