Have the current polar ice caps receded further than those that existed before the beginning of the last Ice Age?

Has science been able to determine from the geologic record how our current ice caps compare to those that existed before before the beginning of the last Ice Age? If so, how do they match up? (I tried to ask this on Physics.SE, but it was suggested it was more of a history question)

Perhaps this is what you are looking for. In particular, look at the bottom graph in red, which is an estimate of global ice volume. The data was taken from oxygen measurements in Antarctic ice cores. 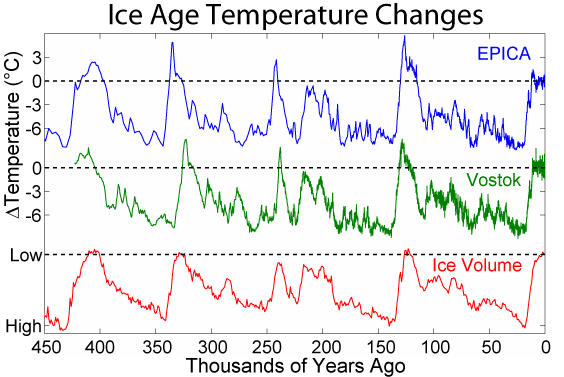 Assuming they have their data and estimates close to right, it looks like our current worldwide volume of ice is not a record low for the Pleistocene. However, its pretty close to it. The end of the Oxygen (green) graph looks a bit wierd too. Still, there's nothing on the end of that ice graph that draws the eye to say, "something different is going on here".

WHICH icecaps? If you mean glaciers, WHICH glaciers? Some no doubt extend further, some less far, some didn't exist before the last ice age, for example.
As to the polar icecaps, the northern one sits entirely on top of water, if floats, so there's no way to know if it was larger or smaller in the past beyond where we have photographic record
The southern one covers pretty much the entire Antarctic continent, so has the same issue. If it were larger in the past, it would have been over open water and no historical record is left. If it were smaller, the evidence is hidden under miles of ice and rather hard to reach.
Most likely it will be the same with the polar caps as it is with the glaciers: in some places they extend further, in others they extend less, than in the past. But no worry, with the predicted global cooling (announced last week by the British Met Office through the BBC) it'll sopon get a lot larger :) (of course that was in part sarcasm (they did indeed announce "global cooling", just as they did in the 1970s, right before they announced "global warming" and no are making an about face once again), I believe in global cooling as much as I do in global warming, such things are cyclical and nothing we can influence anyway so why worry about them?).
And no, it's not a history question so much as a geology one. Doesn't belong under physics indeed, but afaik there's no geology SE you could ask.

Not the answer you're looking for? Browse other questions tagged science prehistory or ask your own question.

10
What is the oldest verifiably correctly translated written work?
9
Why did Winston Churchill say "perverted science" in his Finest Hour speech?
29
Why were there no agricultural, city-state forming civilizations in the Ice Age?
37
Why did the Royal Society in 1771 believe that a continent further south than Australia should exist?