This question is only about copies of the spear that's kept in Vienna, not the Roman one or any other that are connected with "original" Holy Lance. I'm making this research for the story I'm in the middle of writing

I'll answer this question with what I've found out during my research up to this time, but first I'll wait for other responses (according to what I've understood from different meta topics, that's the way I should do, but maybe I'm wrong, I've got no experience with this site).

In 1000, Holy Roman Emperor Otto III and duke of Poland, Boleslaw I Chrobry, met at the Congress of Gniezno, which was the first capitol of Poland. During the meeting, Otto III gave Polish prince the copy of Holy Lance, which (so called "original one", even if it's from 8th century) is recently kept in Vienna, as a part of Imperial Regalia. It was one of symbols of his acceptance for creation of Kingdom of Poland, which was part of Otto's idea for expanding Empire's influence in Eastern Europe, through allies with Poland and Hungary. While the wooden staff didn't survive the millenium, it's spearhead is still kept at Krakow's Wawel Castle.

Unfortunately the reliquary with a fragment of nail (from Jesus' cross, according to legends) was stolen (with much more of Polish crown treasure) by king John Casimir II from Swedish dynasty of Vasa, when he decided to leave Polish throne. He took it to Paris, where he became an abbot of Abbey of Saint-Germain-des-Prés. The relic finally vanished when the chapel was robbed during French Revolution, in 1793.

I know the story of Polish one well, the same with the one in Vienna and found some good Hungarian language sources on the St. Stephen's spear, at least until the 17th century. But there were few other copies and I would be very happy to receive any additional informations about them. To who they were gifted, by which of Holy Roman Empire rulers and what was the reason? What happened to them later?

Especially any informations about spear gifted to Gerard of Lorraine (I believe that's the "Gerhard of Alsace" mentioned in Polish sources).

Here's what I've collected from various sources up to this time:

Historians agree that one of them belonged to Saint Stephen, first king of Hungary. Otto III took a crown for Stephen I to Gniezno and it was sent from there to Hungary, but no sources I could find clarify if the spear came to Hungary the same way. This "Polish route" is mentioned by French monk Adémar de Chabannes in his chronicles, but their text is unavailable for me. I've read also that there's possibility it could be inherited by Stephen after his father, Grand Duke Géza.

Here's a page from Gospels of Otto III showing Boleslaw and Stephen standing around the emperor, with crowns and both spears. 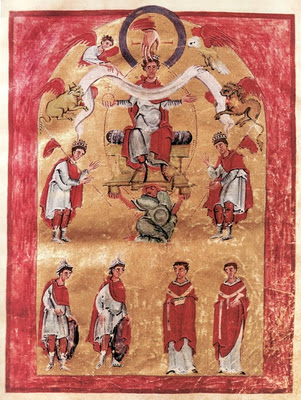 It also appears at the coronation mantle of Stephen I, which is kept in Budapest's National Museum, and at coins from Stephen's times, which have been found in 1968, the revers of which depicts them with words "Lancea Regis". But even if historians agree with each other that the spear existed, nothing of what I've found is sure. 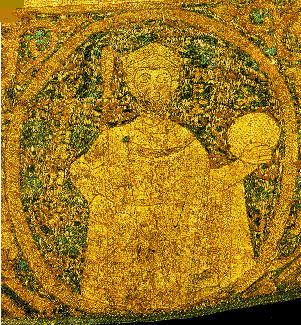 During the fights between next rulers of Hungary, Peter Orsoelo and Samuel Aba, both of who were relatives of Stephen, Peter overtook a spear of unknown origin from Samuel and gifted it to Holy Roman Emperor Henry III in return for help. Henry III sent it to Rome as a symbol of victory. According to chronicles of Archbishop of Milan, Arnulf III, it was placed in St. Peter's Basilica, at least until 1693, when it's been mentioned as being placed under guards at Porta Guidonea (one of the church's gates). Unfortunately I was unable to find any later signs of its existence. Maybe some of you may help here.

According to the most unreliable sources, copy of the spear was gifted to Bretislaus II, but I believe it's just misunderstanding in Polish sources and it's the same one that was owned by his father, Vratislaus II. I'd be glad if anybody can put any light on that matter. The lance of Vratislaus II came from Rudolf von Rheinfelden (what's somehow confirmed in the following document), for whom I suppose it was constructed in order to prove his rights to Holy Roman Empire throne. But I'd love to know how Vratislaus II got into its posession.

But another lance appears much earlier. The following illustration for Gumpold's Legend, coming from the beginning of 11th century, shows the winged spear - the same type as Polish and Hungarian one, held by St. Venceslaus. While it's possible that it's just an addition of illustrator, who surely knew how the original one looks like, the winged spear is also at the reverse of XIth century coins (dated before Vratislaus II).

What's important, Vratislaus II soon placed his lance in the church of St. Venceslaus, what could the existence of the St. Venceslaus' spear in later sources, but in any way it cannot deny the existence of earlier ones (illustration and coins). So it's unknown if that's the same spear, two different ones, or the earlier one never existed. Unfortunately, once again I couldn't find anything about it's later history, except for the fact that it's gone now. 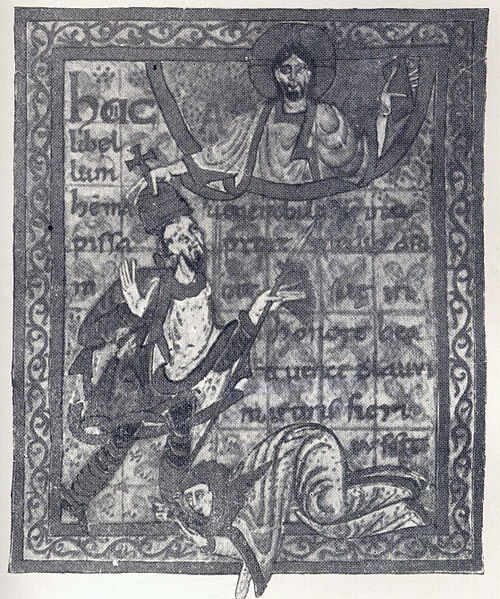 Not the answer you're looking for? Browse other questions tagged poland holy-roman-empire 11th-century hungary bohemia or ask your own question.