I am interested in how much plate and what exactly plate elements have been worn by men-at-arms/soldiers at the turn of the 14th century in different parts of Europe.

I have established that a typical man at arms wore some kind of helmet, usually a kettle hat, and a form of hourglass gauntlets, usually with simplified/chainmail/no protection of the fingers.

Were there any other elements of plate worn by men at arms? I'm especially interested in any evidence of the usage of closed helms or some sort of face/throat protection worn by them. How about joint protection?

Any findings would be welcome, same for iconography, only in that case I would ask for the context and percise dating of the icon. Sometimes the iconography showed people in bizzare armour, so called "mock armour", to ridicule the depicted person.

The essentials of the transition from twelfth-century mail harness to the fully developed plate armor of the fifteenth century man-at-arms can be summarized as follows:

Articulations: Iron plate or hardened leather defenses for the elbows, knees, and shins first appeared in the mid-thirteenth century, and during the following hundred and fifty years protection for arms and hands, legs and feet became steadily more complete.

Torso: From the mid- to late thirteenth century, the torso of a well-equipped man-at-arms would be protected by a surcoat of cloth or leather lined with metal plates — a coat of plates, which by the mid to late fourteenth century would be supplemented, or wholly replaced, by a solid breast-plate. Underneath, a mail haubergeon continued to be worn, while it was still usual to wear coat armor on the outside, although there was much local variation in this. In England, for example, the surcoat was replaced by the short, tight-fitting jupon.

Head: In the early to mid-fourteenth century, the visored bascinet with attached mail aventail to protect the neck was replacing the round-topped great helm and coif for practical campaigning purposes. Visors came in a variety of forms. The simplest, common in Germany and Italy, consisted of a nasal which when not hooked to the brow of the bascinet would hang from the aventail at the chin. Often, indeed, men fought in bascinets without any form of visor.

Weaponry & Shielding: With the development of a fully articulated plate armor, the shield now became largely redundant. The emergence of plate armor also prompted a change in the man-at-arms primary weaponry. The sword with a flat blade, which provided an effective cutting edge against mail, was gradually replaced during the fourteenth century by one with a stiffer blade tapering to an acute, often reinforced point, designed for a thrusting action against plate armor.

The memorial brass of Sir Hugh Hastings (d.1347) in Elsing church, Norfolk. With flanking figures representing some of Hastings’ companions in arms, this is an intriguingly varied ensemble of body armor from the mid-fourteenth century. Note the visored bascinets, the skirted jupons, a curiously shaped kettle hat (bottom right), a pole-axe (bottom left) and the mounted figure of St George above Hastings’ head.

By the late fourteenth century, when this illumination was painted, men-at-arms normally fought on foot, rather than on horseback. Contemporary artists, however, continued to depict battle scenes as dramatic clashes of mounted knights. 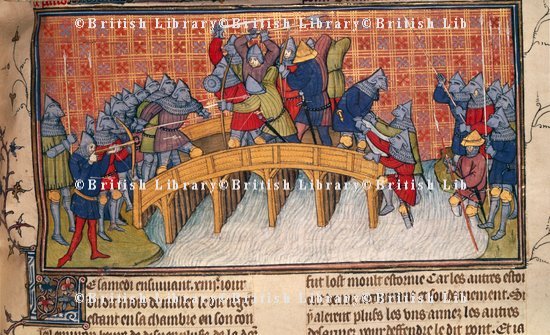 Because the combat shown here took place on a bridge, the artist gave us a rare glimpse of how fourteenth-century men-at-arms actually deployed and handled their weapons when fighting as heavy infantry. As usual in medieval infantry battles, the defenders (left), able to maintain better order, ultimately won the fight.

Unless provided by a lord or patron, or possibly in fulfillment of a local community’s military obligations, the equipment of an aspiring man-at-arms would be his own responsibility. Although the mass-produced plate armor of the later middle ages may have been relatively less expensive than the mail hauberks of earlier centuries, equipping for war from scratch remained a costly business.

Consequently, the quality of a man’s arms and armor would have offered a clear indication of his place in the social hierarchy of the military elite. Much of the surviving evidence depicts the up-to-date harness of well-equipped noblemen; but, in reality, warfare in fourteenth-century Europe involved a heterogenous multitude of noblemen without prospects and gentlemen free lances, many of whom would have fought in armor of uneven quality.

Warfare in the Medieval World by Carey, Allfree, and Cairns

Men at arms varied a lot in wealth and status. My knowledge is based on England and the hundred years war area, but you should find many universal similarities. In the early 1300s about 20-30% were knights, though by the early 1400s this was down to around 10%. Knights received 2 shillings a day as pay while common men at arms got half. You might add that up and compare with the prices of various armour types. Generally, they were intended to serve as armoured cavalry or heavy infantry and therefore were at least equipped in the same way as knights, with varying levels of quality. Of course you must first bear in mind that there was no uniform in those days, and they chose equipment based on their personal preferences and what they could afford. Another factor was battlefield looting, which certainly was a benefit used by all classes to upgrade their gear. There was therefore a lot of mixing with plate pieces, mail and brigantine. One thing more certain is what was actually required of them as men at arms. They were heavy cavalry as a base, and had to have a warhorse worth roughly 10 pounds. This might be a destrier (preferably) or a courser. Lances were needed to charge with as a unit. So they had to at least keep up with the knights. To paint you a picture of the average man at arms, imagine a mail coat with plate on his joints (shoulders, elbows knees) three quarter plate on the legs or splints or chausses, any helmet, though if he's bought it himself, likely an older model. A heavy lance and a sword, mace or axe were his weapons. So he could look just like a poorer knight, but with potential to be richer. War could be very profitable, and especially at this time, even peasant soldiers like archers got rich.

Not the answer you're looking for? Browse other questions tagged 15th-century 14th-century armour or ask your own question.

11
Whose colors/coat-of-arms did men-of-arms wear in a feudal army, 14th century?
15
How long does it take to craft the kinds of armour worn by typical medieval warriors in europe?