Is this true that the Soviet Army soldiers had no helmets in the beginning of WW2?

Is this true that the Soviet Army was so poorly equipped by the WW2 that soldiers had no helmets?

Don't know about helmets specifically, but in a nutshell, no. The Red Army was very well equipped; it had more airplanes and tanks (and some of them of better make) than the Germans. Same goes for many other categories of materiel.

I am surprised that nobody linked to suitable wikipedia page:

The SSh (stalnoy shlem, or steel helmet) 39 was of simple, more modern design, and was much easier to manufacture than the M36. The SSh-39 would be the standard design for Soviet helmets for the next 29 years, with only minor changes occurring during that time. It is also the design for the helmet on the Tomb of the Unknown Soldier in Moscow. The helmet was produced primarily in three factories, the Stalingrad Tractor Factory (designated CT in the ink stamp), the Red October Factory (3K0) also in Stalingrad, and the Lysva Metallurgical Factory (LMZ).[2] The first liner was an eight-finger leather liner, similar to the German M35-M42. Next came a short production of an eight-finger liner made of Gralex. The final version of the SSh-39 liner was cloth, similar to the M-36 liner. All three variations of the liner were suspended from the helmet by three metal tabs, which were riveted to the shell near the top. This helmet, like the M-36, saw action in numerous campaigns before it was phased out in 1942 in favor of the SSh-40.

Article also mentions other 2 types of helmets used in World War II (M-36 and SSh-40) and Adrian helmet that was used in early years of Soviet Union. Also there's a poster with classic red star helmet: 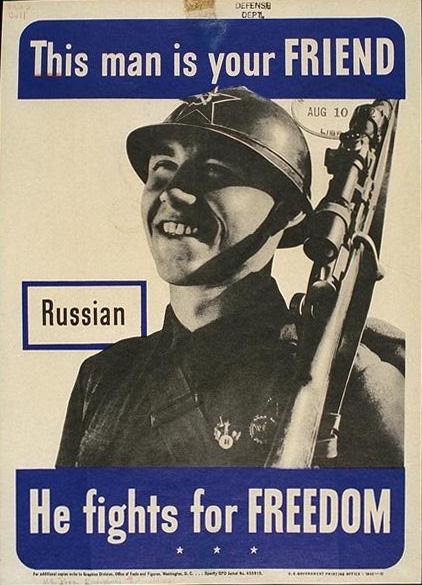 The myth of Russian helmets is quite popular speaking not only about the beginning of the war. The truth is that even if Soviet Army had enough helmets, there were some other reasons why soldiers didn't want to use them.

First of all, they were highly uncomfortable and reduced the sight, so soldiers preferred caps. Also they were made of very poor material (don't ask me for details) and too weak to provide good cover from anything (not speaking of bullets, as there were no helmets at those times which could protect from a shot). This way especially at the end of the war, when Germans didn't have as much artillery, helmets weren't so important for Russian soldiers. Another reason I've heard about was the shiny material, which helped Germans shooters to localize Soviet soldiers from a distance.

In the queue to blame there's also Russian propaganda machine. It's said that when Soviet Army were coming to Poland, soldiers heard from everywhere that Germans are in panic and they just run away from Poland leaving everything, including helmets. This way some Russian soldiers diaries contain scenes of leaving heavy and uncomfortable helmets on the road, in order to get a new one, left by Germans. They didn't even expect to fight until they reach the German border and in many cases they were right about it. Sounds a bit like Catch 22, don't you think?

I think you are mistaken with the wars. This is true for the Great War. Russian forces were poorly equipped and helmets were the last thing Russian industry would have thought of.

Here is a picture of charging Russian infantry in 1916 (I do not put it here due to copyright).

1
Has an underequipped army ever won a major war?

1
Is it true that the soldiers returned from WW2 either didn't marry or kept themselves from families?
18
Why did Soviet soldiers who plundered occupied territories during WW2 prefer watches to other valuables?
6
What was the alcoholic beverage of choice for British soldiers during WW2?
9
Was the Soviet Union in 1945 seeking to capture German soldiers and civilians, or drive them west?
8
When did the Soviet Union stop blaming the Entente for WW2?
38
Did the Soviet army intentionally send troops (e.g. penal battalions) running over minefields?
6
Is it true that there were American POWs in Soviet captivity after the Second World War?