I found this postcard in several shops in Lisbon, Portugal. It depicts the transatlantic voyage from Lisbon to several locations in North and South America.

I wonder at what time this kind of advertisement was popular.

Some indications: I found this blog: http://20agetravel.blogspot.pt/2012/03/portugal-shortest-way-between-america.html that indicates that the postcard itself may be from 1907, however it does not give explanations why this may be so. Then the city associated to Pena Castle is called Cintra, a name not commonly in use anymore (now it is called Sintra). According to Wikipedia (http://en.wikipedia.org/wiki/Sintra#History) the name was used in 1809 but I could not find information in which period the city's name became Sintra. 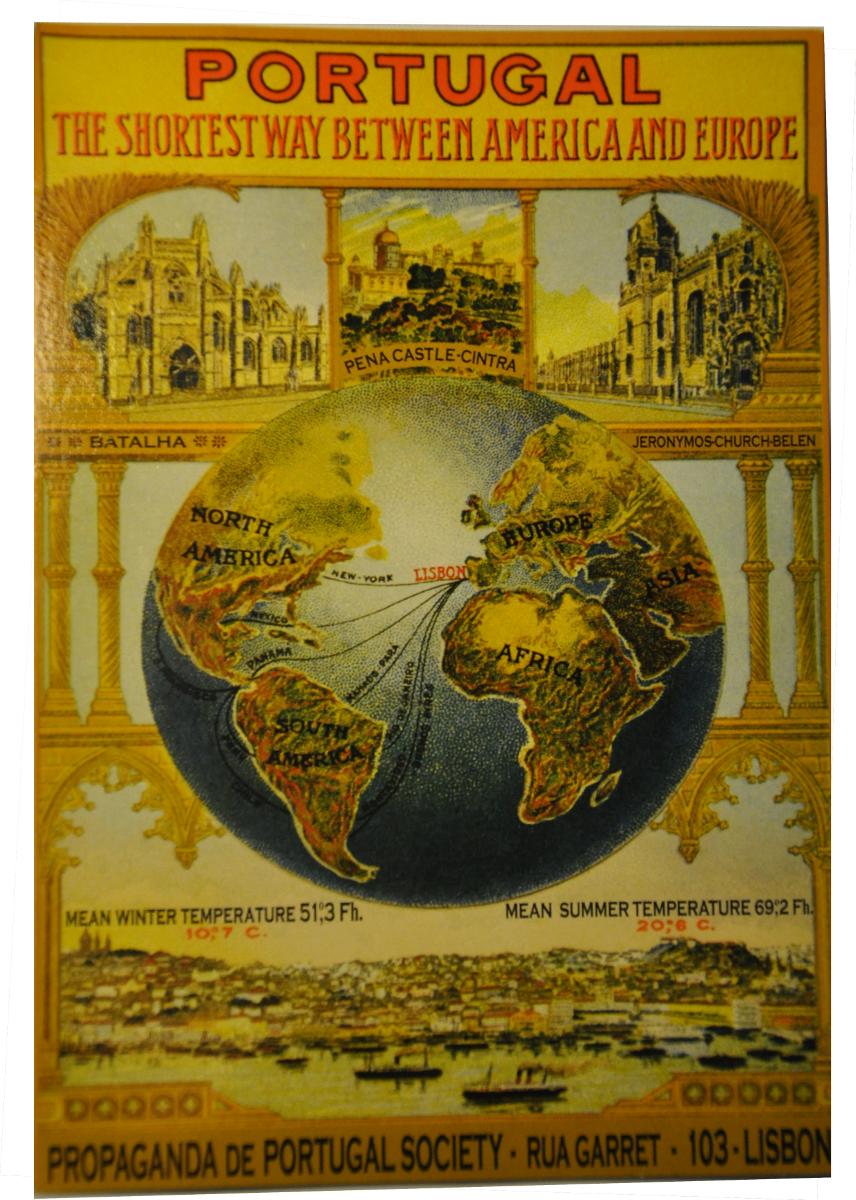 If we further make the assumption that they'd want to depict the most modern transport possible in their promotional material, It would seem natural to put this towards the earlier part of our window. After 1890 steamships with functional masts might start to look old-fashioned. Thus it looks like the most likely window for this would be sometime between 1855 and 1890.

(Note that later steamships did have vestigal posts where the sails used to go, even if they weren't equpped with actual sails to use on them. They usually didn't seem to have all the extra horizontal rigging I think I'm seeing there. Still, I could be wrong on that score, which would move the end of our window way out to 1914).

The "Propaganda de Portugal Society" probably refers to the "Touring Club de Portugal", previously known as "Sociedade de Propaganda de Portugal". It's foundation date is 28/02/1906. That's probably why they date the poster as post-1906. The only thing I can guarantee is that it can't be from before, not in that form. Maybe the society recycled some other, older, images from other sources and that's maybe why it looks out of time for 1907 in some details.

The only sources (like this one) I got about the society are in Portuguese (sorry!) but they are quite trusted.

Not the answer you're looking for? Browse other questions tagged transportation portugal travel or ask your own question.

39
Transatlantic Zeppelin trips usually took > 100 hours. How did they stock enough food, and where did they sleep?