Who came up with the name "Peloponnesian War"?

If I understand correctly, Thucydides actually called his book just History. If that is correct, then at what point did it become known as History of the Peloponnesian War?

EDIT: Here is how he begins:

Thucydides, an Athenian, wrote the history of the war between the Peloponnesians and the Athenians, beginning at the moment that it broke out, and believing that it would be a great war, and more worthy of relation than any that had preceded it.

Come to think of, I ran a search on the Perseus website (it's great we have it!) and it turns out Thucydides did use the term once:

The Median war, the greatest achievement of past times, yet found a speedy decision in two actions by sea and two by land. The Peloponnesian war was prolonged to an immense length, and long as it was it was short without parallel for the misfortunes that it brought upon Hellas.

Still, I think it is not obvious that this term should have become the title of the whole book. Or am I missing something obvious here?

According to http://www.historyofinformation.com/, the first Latin translation was commissioned by Pope Nicholas V and completed in 1452 by Lorenzo Valla. The image below is from the first page of the first book. My Latin is below basic, but the first line seems interesting, a specific reference to 'Peloponnesian War'. 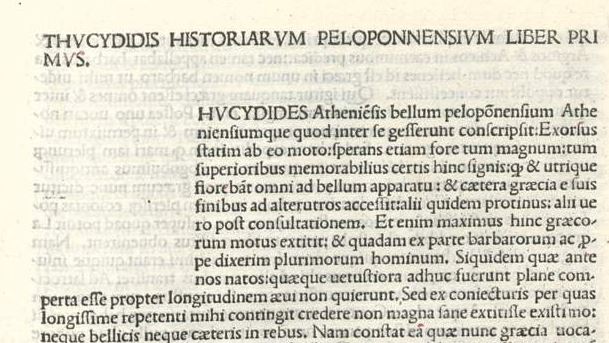 Here is the link.

Not the answer you're looking for? Browse other questions tagged ancient-history ancient-greece historiography athens sparta or ask your own question.

6
Who is the most ancient Indo-European who is known by name?
5
Name of the ancient law that forbade naming/publicising the name of a criminal?
9
Did the Persian Empire really finance both sides of the Peloponnesian war?
12
Did the Spartans really taunt Philip II of Macedon with a single word?
2
Was (Mahanian) "control of the seas" an Athenian goal in the age of the trireme?
13
Who titled the works of Aristotle?
6
Why did Cleon say this in the Mytilenian Debate?
6
Did Sparta give citizenship to the helots who participated on its side in the Battle of Plataea?
7
Why did Sparta turn on its ally Elis during the First Macedonian War?