What corrections did the Catholic church make to the Copernicus work "De revolutionibus"?

On 5 March, 1616, the work of Copernicus was forbidden by the Congregation of the Index "until corrected", and in 1620 these corrections were indicated. Nine sentences, by which the heliocentric system was represented as certain, had to be either omitted or changed. This done, the reading of the book was allowed.

I wonder what the corrections were exactly? Did they negate the theory or just represent it as doubtful or hypothetical?

I've finally found the exact sentences, so I'm putting here a new answer instead of the yesterday's one.

As it's written in official materials of Copernikus' Museum in Frombork, Poland, such corrections were done simply by striking out some parts of the text and it happened only with something like 8% books that survived until recent times. It was their owners responsibility to delete those fragments, so it's no wonder that many of them didn't want to do that. What's interesting, for Italy the percentage is around 60%, while for Spain and Portugal, which were strongly Catholic countries, none of the books were changed. The process of deletion and changes looked f.e. like here, at the copy kept in Peabody Library: 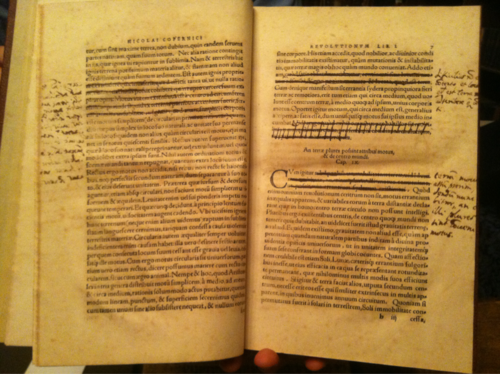 Thankfully, one of the copies of second edition (1566) is among the highlights of University of Rochester libraries, which provided a nice description to all changes, including the most famous ones, from 1620. I'll quote only the fragments connected with Inquisition changes. For more informations and photocopies of changed pages, check the link to official page of library for an article with full description of this particular copy

In 1616, the Inquisition placed De revolutionibus on its Index until corrected -- Decree XIV. In 1620, in Decree XXI, the required corrections were officially announced. This is an extraordinary measure since for very few books did the Index specify the type of changes to be made. The ten emendations were designed to make Copernicus' book appear hypothetical and not the description of a real physical work. One may wonder why the Church took 77 years to react against an astronomical treatise whose content seriously challenged the traditionally accepted idea that placed a static earth in the center of the universe. One of the reasons is that numerous scientists only viewed the treatise as a useful manual to calculate planetary positions for any conceivable time, emphasizing, however, the hypothetical character of Copernicus' main thesis. Indeed, the first edition of 1543 included the infamous anonymous foreword, in fact written by Andreas Osiander, containing the following words: "these hypotheses need not to be true nor even probable."

We are going to show some examples of how the recommendations of the Inquisition were faithfully applied in this second edition of the treatise. Passages from the specific recommendations of Decree XXI are provided in translation and in italics. After each recommendation, one can observe how it was reflected in the text itself.

Therefore, with these recommendations, let those who have some diligence approach the judgment of this emendation, which is as follows:

In the preface near the end:

Delete everything from "perhaps" (Si fortasse) to the words, "my work" (hi nostri labores) and adjust it thus, "my work and those of others" (ceterum).

Here we include Professor Edward Rosen's translation of this deleted passage from Copernicus' preface -- a dedication to Pope Paul III:

"Perhaps there will be babblers who claim to be judges of astronomy although completely ignorant of the subject and, badly distorting some passage of Scripture to their purpose, will dare to find fault with my undertaking and censure it. I disregard them even to the extent of despising their criticism as unfounded. For it is not unknown that Lactantius, otherwise an illustrious writer but hardly an astronomer, speaks quite childishly about the Earth's shape, when he mocks those who declared that the Earth has the form of a globe. Hence scholars need not be surprised if any such persons will likewise ridicule me. Astronomy is written for astronomers. To them my work too will seem, unless I am mistaken, to make some contribution also to the Church, at the head of which Your Holiness now stands."

From "Nevertheless, if we examine more carefully," correct it to "Nevertheless, if we were to examine the matter more carefully, it makes no difference whether the earth exists in the middle of the universe, or away from the middle, as long as we judge that the appearances of the heavenly motions are saved. (Si tamen attentius rem cosideremus, nihil refert terram in medio mundi, vel extra medium existere, quoad salvandas caelestium motuum apparentias existimemus).

Here we include the original sentence that has been deleted: (videbitur haec quaestio nondum absoluta, & id circo minime contemnenda): "it will be apparent that this problem has not been solved, and it is by no means to be disregarded."

On folio 10, at the end of the chapter, delete these last words: "So vast, without any question, is the divine handiwork of the most excellent Almighty" (Tanta nimirum est divina haec Opt. Max. Fabrica). Certainly, the Inquisition thought that this passage clearly identified the design of the Creator with the heliocentric system, which is graphically described in the famous woodcut inserted in the previous page of the treatise.

The title of the chapter (De triplici motu telluris demonstratio: On the explication of the three-fold Motion of the Earth) should be adapted in this manner, "On the Hypothesis of the Three-fold Motion of the Earth and its Explication." (De hypothesi triplicis motus telluris eiusque demonstratione). The inscription circa telluris axem is probably a stylistic suggestion to replace the printed version circa axem telluris. Stylistically, a genitive such as telluris is normally placed between the preposition and the noun. Furthermore, we also note that the first edition includes a comma after telluris. One may wonder whether the reader of our copy wished to emphasize, and clarify, that telluris should only modify axem.

Not the answer you're looking for? Browse other questions tagged 17th-century poland science catholic-church book or ask your own question.

11
Why was Copernicus not persecuted by the church, but Galileo was?
15
What were the responses to Copernicus' heliocentric theory?

5
Why did Catholic church wait for 350 years to accept "Galileo's idea"?
15
What were the responses to Copernicus' heliocentric theory?
12
What happened to the wealth of the Roman Catholic Church accumulated over the ages?
8
What advantage did Napoleon gain by attacking and antagonizing the Catholic Church?
11
Why was Copernicus not persecuted by the church, but Galileo was?
10
Did the Catholic Church ban adoption in the Middle Ages?
2
Was there Church opposition to heliocentrism in 1600?