Why did Chinese use high tin bronze for swords?

Is there a good explanation for why this distinction happened?

Not all blades were constructed in the same way and of the same materials, but the Chinese are noted for originating binary swords.

Ancient Chinese metallurgy recorded six different bronzes. In practice, the archeological record shows a much wider array of proportions, if only because much bronze was likely to have been recycled, but it seems clear that they would have known about the properties of high-tin and low-tin alloys. High-tin bronze is very hard, as you note, and very resistant to corrosion. It thus would not deform in battle (i.e. bend permanently instead of springing back into shape), and would hold its edge for a long time, at the expense of brittleness.

Early high-tin blades in particular tended to be short (50-60cm) on account of the brittleness, but by the late "Spring and Autumn Period" (~500 BC), the Chinese were quite advanced in metalworking, and were casting bimetallic swords. The core of the sword was softer and more resilient low-tin bronze, whereas the edges were formed from harder high-tin bronze. 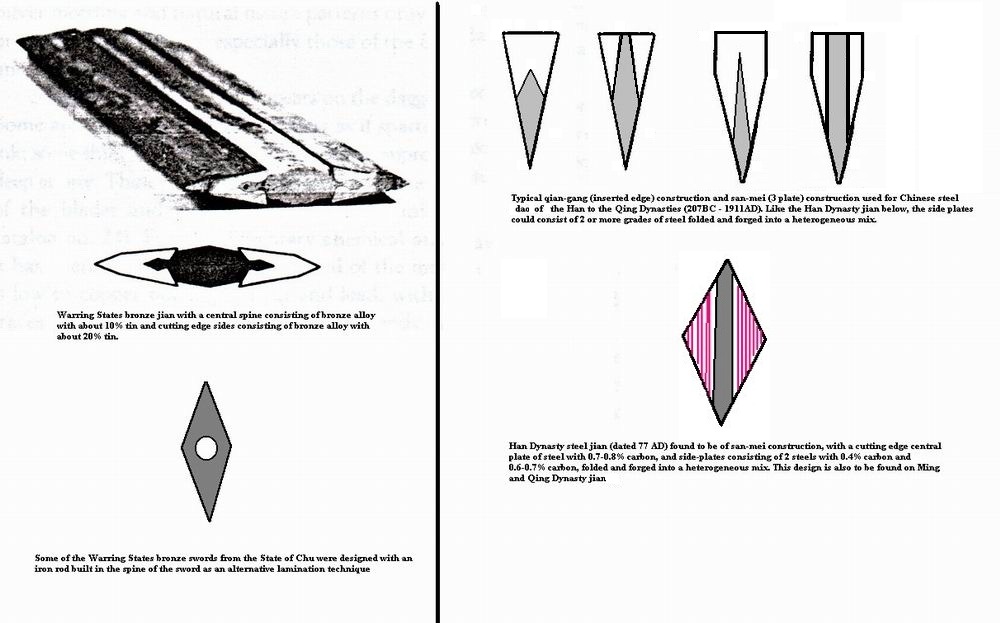 (from http://thomaschen.freewebspace.com/photo3.html , original source not provided)

One should note also that swords in this period were a weapon of the nobility. Tin was rare in the south, and would have been expensive. This technique was also too complex and expensive for mass production. The primary weapon for foot soldiers of this era would have been the dagger-axes, and later spears and halberds, and it was improvements in ironworking and steel making (originating in the south) in the Han Dynasty that would displace the bronze sword.

I would say it has something to do with the sharpness gained with the high-tin content, according to several sources higher tin content seems to correlate with sharpness. After that it comes down to a fighting style, the Chinese refined the art of fighting (martial arts have been evidenced in China as far back as the 5th century BC while the earliest reference in europe seems to be around 1200 AD), using precise, deliberate cuts with sword, if you ever tried to use a Jian or for that case a Katana (some claim the Japanese learned blade-smithing from the chinese), it would shatter if you bash it against a tree for example (although a seasoned practitioner might be able to cut the tree without breaking the sword although it would probably be seriously damaged), an ancient middle-eastern or medieval blade would likely just warp. This precision in fighting may have the Chinese would prefer sharpnes to tensile strength

As for the tin content in bronzes in general there is a lot of variability. Determining the tin content of an alloy also is not simple and it is easy for an inexperienced metallurgist to make blunders that will have incorrect results.

A third factor to be aware of is that the presence of other metals will have a large effect on the behavior of the primary alloy. For example, a bronze having even a small amount of zinc in it will behave metallurgically much different than one that does not.

Several reasons why this may have happened:

No doubt the actual reason historically would be a combination of factors like this. If you can only make hard, brittle, bronze, rather than soft, bendable, bronze, the design of the items you make will reflect that. Which tends to resist changing the composition of the alloy if you do get knowledge of the other kind. Why change what works after all (especially in a society as steeped in tradition as China, where anything coming from the outside was viewed with extreme suspicion).

Not the answer you're looking for? Browse other questions tagged weapons ancient-china metallurgy or ask your own question.

8
Why didn't North American tribes use bog iron?
3
Why didn't the Chinese repeating crossbow dominate?
11
Why were swords used in battle?
3
How did the Chinese crossbows that shot bullets work?
10
Was bronze ever used for chainmail?
5
Did bronze metallurgical development peak by the end of the bronze age?
11
What is the meaning of the cross on a Chinese bronze Gu Chalice?