What is the real story of the Lion of Gripsholm Castle? 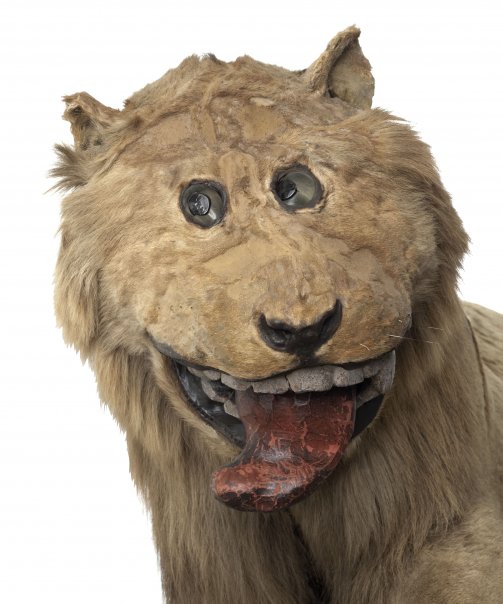 In 2011, one of the popular stories over the Internet was a history of The Lion of Gripsholm Castle. The Swedish language version of the linked blog entry was the one responsible for spreading this story.

The most detailed description of the Lion's story comes from the Mental Floss website article:

King Frederik I of Sweden was given gifts from the Bey of Algiers in 1731. These included a lion, another wildcat, three hyenas, and a freed slave who became the animals' keeper. The creatures lived out their lives at Djurgården, the Royal Game Park.

Quite a few years after the lion died, some of its remains were sent to a taxidermist to be mounted. All that was left was the pelt and some bones. The taxidermist was not at all familiar with this animal called a lion. So he did the best he could with what he had. (...)

King Frederik's lion is on display to this day at Gripsholm Castle, a former royal residence and now a museum in Mariefred, Södermanland, Sweden.

I don't care what was the reason that poor lion looks like that, as I doubt there can be any verifiable answer. I'm much more intrigued with the origin of the gift.

Unfortunately I couldn't find any valuable sources for this story on the Internet, even the official website of the Museum at Gripsholm Castle doesn't write about it.

But when I've tried to investigate it a bit, it turned out that there was no such person as Bey of Algiers (or bejen av Alger, as in the original Swedish text).

In 1731, Algieria was known as the Regency of Algiers, a territory of Ottoman Empire. According to Wikipedia, the official title of its ruler was Dey, who nominated three beys, governors of provinces, which were called beyliks:

The realm of the dey of Alger was divided into three provinces (Constantine, Titteri and Mascara), each of which was administered by a bey (باي) whom he appointed.

I'll just clarify that the province name for Mascara was Couchant, while Mascara was one of three towns from which beys governed in different years, with Mascara being the right one for 1731, moved there by Mustapha bou Chelagram (Mustafa al Masrafi) from Mazouna in 1710 and later in 1792 to Oran.

This way Frederik I could receive the gift from at least 4 different persons. I can suppose such a gift for an European king would come from the most important of them. But even that it's not clear. According to English language Wikipedia list, the dey in 1731 was Abdy Pasha. However French language list claims that Abdy Pasha (Kurd Abdi) was replaced by Ibrahim III in 1731, not 1732. So even in this situation, there are at least 2 and up to 5 candidates.

Unfortunately, I wasn't able to find any English and French language Internet materials related to any of them.

This way I wonder, who exactly made that gift to Frederik I of Sweden, on what opportunity and why? From what I know, there weren't any important contacts between Regency of Algiers and Sweden in 18th century, but my knowledge on this subject is narrow.

During the 18th and beginning of 19th centuries the Deys of Algiers made a series of treaties with European seafaring nations. Each of the European states would deliver yearly “gifts” in order to secure free passage of their ships. Otherwise, the corsairs of the North African states would capture whatever they could of ships: seize the cargoes and ships, and sell the crews and passengers as slaves. Sweden made treaties with Algiers in 1729, with Tunis in 1736 and with Morocco in 1763. The treaty in question with Sweden (signed in 1729) involved the following gifts to the Dey of Algiers: For the Dey of Algiers:

For the Dey’s ministers, under which the admiral is included:

Finally at the close of the treaty, the navy officer, signing the same, would promise the Algerian government the following ammunition:

One of the lions is apparently the one still preserved at Gripsholm.

Not the answer you're looking for? Browse other questions tagged 18th-century ottoman-empire sweden or ask your own question.

11
Was Swedish king Charles X Gustav's horse killed during Siege of Kraków (1655)?
10
How dependent was Nazi Germany on iron ore from Sweden?
9
Were the Swedish holdings in northern Germany accepting or resentful of their overlord after the Peace of Westphalia?
8
Through what developments did Sweden end up in war in northern Africa in early 1800's?
1
How did the Swedes integrate Geats, Danes, Walloons, Finns & others?
11
How did the Swedish army deal with prisoners of war in the Thirty Years War?
5
Why did Sweden not fortify Swedish Livonia along its eastern frontier, including the approaches to Riga?
3
How did Pontus de la Gardie drown?
12
Where can I find information on a Polish castle dismantled by Sweden?