How did commoners in late medieval to early modern Europe learn to read?

Literacy in the early Middle Ages was very low, but as I recall, by the time of Reformation quite a lot of commoners could read. Even if they were not very good in reading and writing, by the 17th century many had a copy of the Bible they could read, as well as pamphlets posted on important occasions, etc.

How did they learn to read? Compulsory and state-founded primary education emerged mostly after this period, so who taught the peasants of 15th and 16th centuries how to read?

As you said, by the 17th century many people were literate and had a copy of the Bible. The following figure shows the literacy rate throughout the last 500 years in several countries: 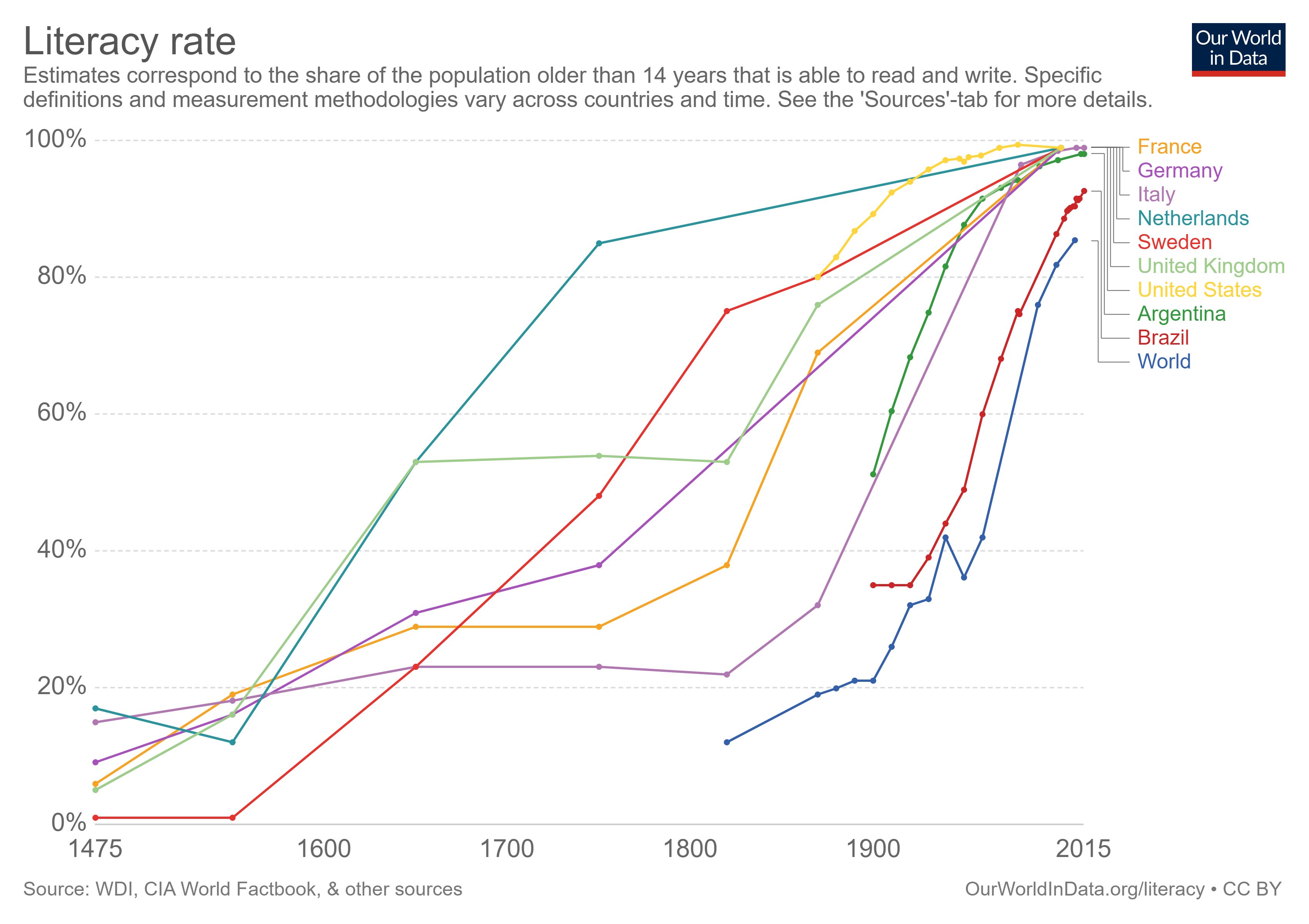 An interesting point for me is the sharp increase in the UK and Netherlands, both Protestant countries, compared to Italy and France which remained Catholic (Italy in particular as birthplace of the Renaissance is disappointingly low).

During the Middle Ages education was religious and few people cared for it but it was offered. From the Wikipedia page on the history of education:

Modern systems of education in Europe derive their origins from the schools of the High Middle Ages. Most schools during this era were founded upon religious principles with the primary purpose of training the clergy. Many of the earliest universities, such as the University of Paris founded in 1160, had a Christian basis. In addition to this, a number of secular universities existed, such as the University of Bologna, founded in 1088. Free education for the poor was officially mandated by the Church in 1179 when it decreed that every cathedral must assign a master to teach boys too poor to pay the regular fee;[62] parishes and monasteries also established free schools teaching at least basic literary skills.

This shows that before the Reformation there was indeed an effort by the Church to educate people.

After the Reformation, the need to be able to read the Bible was increased due to the nature of the new doctrines. They emphasized study of the Bible as necessary for the faithful creating therefore the need for more education. But what were the tools that tried to cover the increased need? Again religious institutions aided occasionally by the state. From the same article:

In northern Europe this clerical education was largely superseded by forms of elementary schooling following the Reformation. In Scotland, for instance, the national Church of Scotland set out a programme for spiritual reform in January 1561 setting the principle of a school teacher for every parish church and free education for the poor. This was provided for by an Act of the Parliament of Scotland, passed in 1633, which introduced a tax to pay for this programme. Although few countries of the period had such extensive systems of education, the period between the 16th and 18th centuries saw education become significantly more widespread.

This shows that during and after the Reformation, efforts were increased both by the responsible authorities (Church, State, Charities) and by the commoners to achieve a level of literacy. Their goal was, as indicated here:

to create good Christians, who would also be loyal and dutiful subjects.

In the same source is documented that residents of the Plymouth colony taught their children at first when they didn't have actual teachers. As knowledge becomes common ground for more, it makes sense to help spread it.

According to William Bradford, in the first years parents taught their children themselves, the colonists having neither a suitable teacher available nor the money to support one. By 1633, that apparently changed, as least for young children.

So overall, the literacy level of people rose through efforts of religious and secular authorities with the combined increased interest of the peasants/commoners to actually learn.

Two major reasons for this : The introduction of printing through Johannes Gutenberg, and the Reformation which implied that every Christian should be able to read the Bible, which made reading accessible and interesting. The Reformation spread first among craftsmen and merchants who could read.

The progressive introduction of paper in the 14th, 15th and 16th century (17th in England) also made writing much cheaper (parchment was made of fine leather and was very expensive).

Most peasants in the medieval times could not read or write, even with basic education (Joan of Arc, born 1412, daughter of a rich peasant or landowner, could hardly write her name). One reason for this was the absence of a real written culture in the spoken languages : clerks and intellectuals wrote mainly in Latin, and merchants used the so-called "lingua franca" (or its equivalent in the Baltic sea) which was a pidgin of Latin, early French, and viking languages (old norse).

The 16th century is the real beginning of alphabetisation, and public schools (run by the community or the state) began to spread. In France, the 1539 Ordinance of Villers-Cotterêts marks the beginning of the French language, but it is also a sign of the progress of written culture in France, since it is the last of a series of royal laws that aimed to replace the Latin language with spoken languages (mother tongues) in official documents.

The vast majority of schools in the modern times were run by churches, cathedrals (there had been cathedral schools since Charlemagne), local parishes, and monasteries. There is a debate concerning the role of (educated) women and mothers in the education of children.

In the rich and noble families, preceptors were hired (this role could also be fulfilled by the local chaplain) or the kids were sent to some elite schools (monasteries, schools of the Society of Jesus...). The schools were mostly run by various religous institutions.

It's worth noticing that some countries were much more educated than others : for example Switzerland, especially in Geneva and its surroundings.

The growth of literacy was a gradual process, but certainly during the Reformation (1520-1550) literacy grew significantly due to the wider availability of printed materials and proliferation of printing presses, which made books much cheaper.

Most education was centered on the monasteries, which were occupied by people known as "friars" (brothers). Friars were very common and they were taught to read from a young age so that they could read clerical materials such as liturgies and gospels. The easiest way to learn to read was to simply to pay a friar to teach you, and many people did this. It was not unknown for curious women to seduce friars in sex-for-reading deals.

There were, of course, many other ways to learn to read, but learning from a friar was the most common method, especially for a middle class or lower middle class person.

Not the answer you're looking for? Browse other questions tagged middle-ages education renaissance reformation or ask your own question.

18
How educated were the clergy during the Medieval period?

42
Why were there no religious wars in Poland?
11
How prominent were taverns in medieval Europe?
5
How thick was Late Medieval horse armor?
2
How did silk manufacturing become a major industry in medieval Europe?
25
How frequently did monasteries attack other monasteries in Early Medieval Western Europe?
10
How widespread was the consumption of rabbit meat by the poor in Medieval and Early-Modern Britain?
5
Why did the US enact compulsory education?
8
A question about the definition of heresy (13th. C)
5
How were large monetary transactions conducted in medieval Europe?
7
When and how did classical mythology subjects start to appear in art in medieval/Renaissance Europe?