Were the "hussars" that Jan Sobieski used at the battle of Vienna actually elite troops?

Apparently, the decisive blow at the 1683 Battle of Vienna was struck by Jan Sobieski, with only 3,000 "hussars" (cavalry). This seems a bit hard to believe, given that the Turkish army had about 100,000, while hussars were the second worst form of cavalry, above only Cossacks. Was Cossack cavalry ineffective relative to other troops?

But dragoons were supposedly twice as good as hussars, and cuirassers twice as good again as dragoons. So could Sobieski's "hussars" actually been better troops in one of the two other categories.

It's easier for me to imagine that the "equivalent" of 6,000 or even 12,000 hussars struck such a decisive blow. Could Sobieski's 3,000 cavalry been elite troops armed with pistols AND blade weapons, meaning that they were actually worth more than their stated number? If not, what would have enabled a relatively small number of troops to strike such a decisive blow?

"It is chivalry that has no equal in the world; without seeing it with your own eyes, its vigor and splendor is impossible to imagine." (Cosimo Brunetti, 1676)

The answer is both "yes", as it's completely different kind of hussars that the one mentioned in the question about effectiveness of Cossack cavalry, and "no", as there were around 20,000 horses in the charge, not 3000.

Original hussars were light cavalry. But when prince of Transylvania, Stephen Bathory, became king of Poland in 1576, he completely reorganized these forces into elite, heavy units, that were much better trained and equipped, with unique tactics. They became famous as so called "winged cavalry". It will be easier to understand why, when you look at the picture below: 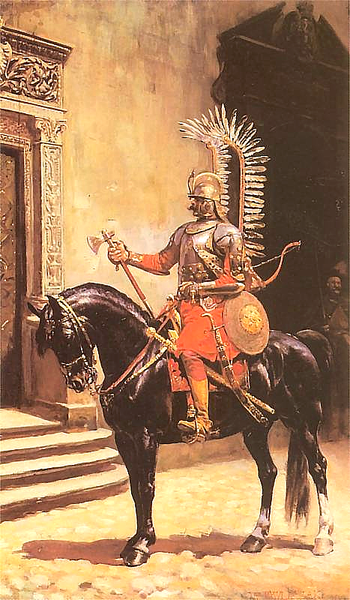 There was a strong belief that the wings caused psychological effect on the enemy, frightening horses and riders. Surprisingly it's mentioned mainly by foreign, not Polish sources, what now leads historians to think that it was just a rumor.

What made husaria of Jan III Sobieski different than other heavy cavalry units of 17th century? A few facts:

Husaria used horses that were breed and trained specially to this aim. They were a mixture of Polish and Tatar blood horses, able to run very fast even under a heavy load. They were also recovering quickly. Thanks to these, and to a special kind of saddle, hussars and the horse could wear much heavier armor. They could also repeat the charge several times during the battle.

The tactic of husaria included a special kind of charge, which proved to be decisive in many battles won by Polish-Lithuanian Commonwealth. By concentrating the formation at the last, crucial moment before crushing the enemy, it was able to completely break the enemy lines, while still being able to change formation or direction even a short time before crushing the opponent. By combining speed and mobility with advantages of strong formations, it was effective against both eastern and western armed forces. Apart from Vienna, other famous battles were Kircholm (1605 against Sweden) and Klushino (1610 against Russia).

As I've written, the charge could be repeated during the battle, going on and through the enemy line, until the enemy forces were finally broken. The main weapon was a lance, which varied in length depending on the enemy. Hussars also had a stabbing sword (koncerz), a sabre (szabla), pistol (or two), and often a carbine or arquebus (bandolet), and even a bow.

Winged hussars in Battle of Vienna

I've got a tendency of depicting this battle with colorful details, legends and anecdotes which are sometimes more or less fake (as it's typical to tourist guides), but I'll try to stick to the facts.

The charge of winged hussars started at 6 pm, while the battle started in the morning. Different historians counts the overall number of cavalry that took part in it as more or less 20000 of horses, what makes the charge of John III Sobieski the biggest cavalry charge in history. This way the mentioned 3000 were only the heaviest, frontal part of the charge, which was supported by other Polish, Austrian and Bavarian cavalry forces under the command of Polish king.

As for Polish cavalry that was stopped in difficult terrain, mentioned by Drux, it's surely connected with the charge of Zwierzchowski and his 200 hussars, that were sent by Sobieski to probe enemy lines and check for possible traps. During the charge it was stopped by the ditch or trench, before it could continue and return to the king with heavy losses. Thanks to them main forces avoided the obstacle.

The attack lasted for half an hour, after which Ottoman army went into panic and run away from the battlefield.

Let's look how Turkish chroniclers were describing this event in 17th century. For them it was a holy war and there was a belief that no "European heathen dogs" could beat warriors of Allah in the field. This way they focused on searching for the reasons of defeat among themselves.

In his works, Silahdar Findiklili Mehmed Aga, counted a few of such reasons:

So your premise is wrong.

56
Is history always written by the victors?
13
Was Cossack cavalry ineffective relative to other troops?
10
Who were the successors of the Roman Empire?
14
Why were there "hussars" all across Europe?
9
Who was the oldest recorded participant in a battle whom we know of?

23
Could the Russians Have Done Better at the Battle of Tsushima Straits Than They Actually Did?
4
How were snipers used on the western front during WW2?
10
Why were the ship names "Scharnhorst" and "Gneisenau" used together?
28
Why were the losses in the Battle of Norfolk so lopsided?
13
When was the tactic of chaining ships together last used in a major naval battle?
7
Was the Seven Years’ War the first time dogs were used to carry messages?
1
When was the last time that the U.S. as a country, state, or city was occupied by foreign troops?