Could the Soviet Union have continued fighting World War II without Caucasus oil?

In 1942, Germany's Fall Blau was initially aimed at capturing or interdicting shipments of oil from the Caucasus to the rest of the Soviet Union. Even though armies were diverted to Stalingrad and even Leningrad, the Germans managed to capture Maikop, and came within 50 miles of Grozny.

Where would the Soviet Union have gotten its oil from, if Germany instead had pursued and succeeded in an all-out attempt on the "Caucasus?" Perhaps Army Groups A and B would have moved in parallel to the lower Volga, bypassed Stalingrad, captured Astrakhan on the Caspian, and move far enough beyond to interdict oil shipments. Or Germany could have sent Manstein's 11th Army and Hoth's 4th Army along with Army Group A to the Caucasus, (leaving Paulus between the Don and the Volga for flank protection), thereby capturing Grozny and isolating Baku.

Early in the war, the Soviet Union had moved hundreds of factories to the Urals from soon-to-occupied territory to Sverdlovsk and Magnitogorsk. My sense is that they would have had adequate, though not ample supplies of oil to fight a war from around the Urals, and east of Moscow, without the Caucasus. After all, Germany managed to continue fighting with "only" Romanian oil supplies (and beyond 1944 without them).

Source: http://karbuz.blogspot.com/2006/10/oil-logistics-lesson-from-wwii-3.html, which sources in turn from "The Prize: The Epic Quest for Oil, Money & Power" by Daniel Yergin

All the nine drilling offices, oil-expedition and oil-construction trusts as well as various other enterprises with their staffs were transferred to an area near Kuybishev, (Russia Federation in Tartarstan near the Ural Mountains north of Kazakhstan). This city soon came to be known as "the Second Baku".

Despite the severe frost the drillers started searching for oil and thanks to day and night working, the Bakuis in the region of Povolzhye increased the fuel extraction in "Kinelneft" trust that first year by 66% and by 42% in entire region of Kuybishev. As a result, five new oil and gas fields were discovered and huge oil refinery construction projects were undertaken, including the first pipe line between Kuybishev and Buturslan was built that same year.

No numbers are given for totals, but if Baku was 72%, plus Grozny and Maikop probably adding up to at least 5-10% more, the rest of Eastern USSR was at most 20-25% - and even nicreasing that WHOLE by 66% would only get you 40% of pre-caucasus-capture totals.

I've read quite a bit about WW2 on the Eastern Front. I think that the Soviets would've included Baku in their scorched earth strategy if the Germans got within 50-100 miles and seemed poised to take the city. If they destroyed the wells, the Germans never would've gotten them operating. Just destroying the refineries may have been enough to foil the Germans, as described below.

But even if they captured the fields relatively intact, how would they have gotten the oil to Germany? Germany's transport was inadequate. They didn't have the rolling stock available to ship that oil by rail, or enough tankers to cross the Black Sea.

As for what Russia would do without Baku production, no doubt US Lend-Lease would have changed priorities. The US was the largest oil producer and exporter at that time. I also think that the US would've sent teams of geologists over to help find and exploit new fields within parts of the Soviet Union that were far from the fighting, and the Soviets may have even welcomed experts who could improve refinery and pipeline operations, as the Russian operations and processes were probably inefficient.

Also, if this still wasn't enough, a portion of Russian agriculture could've been redirected to produce crops that could be distilled into fuel. The great GM engineer Kettering said this would probably work in the US if it ran low on oil (which, incredibly, was a concern in the 1920s in the US). A command economy system like the Soviet one could have imposed something like this easier than most countries could.

Yes,the Red Army would have continued fighting without Baku oil.

Germany could not have extracted much Baku oil - they could never have shipped it to the Reich. But they could have use demolitions and wrecked the Baku oilfields for years. But the Russians had plenty of alternative sources. Under any set of facts, the Russians had an almost unlimited source of strategic supply thru Vladivostok.

By 1945, German fuel manufacturing was kaput from Allied bombing, and the Western Allies were deep inside Germany. It would not have mattered if the Red Army was near or far from Berlin or with or without oil. Germany was a bombed wreck by 1945. Even an extra million more well equipped German troops would not have mattered. German haf no gas by April, 1945.

This is the most important reason why Hitler was a fool to attack Russia. After the failed attack on Moscow,the Germans could never win b/c they didn't have fuel.

I agree with comments made by Schwern. No need to ship the oil back to Germany (more likely back to Polesti since they had refining capacity for double the production of the oil fields at that time). If refining capability existed near the wells, the best logistical solution is to use Russian oil in Russia as long as needed there.

This could create three scenarios that in combination may have been significant for the German war effort at the time:

1) A close, possibly plentiful, supply of fuel and oil for the Nazi war effort in Russia. This closer supply would require less milage for tankers to get to the front as well as less "Injun country" for shipments to move through, freeing up more soldiers, equipment and arms and decreasing wasted fuel and longer transit times.
2) A higher percentage of current production in the Polesti oil fields could be used in Germany or by the axis' oil starved allies. And again, less waste of fuel, equipment, arms and soldiers for trannsit. 3) Denial of the current supply lines of oil to the Russian war effort. Who knows what additional difficulties this could have caused the Russians after a few months as their strategic reserves dwindled? Who knows for sure if they would have had the ability to acquire, refine and distribute from other sources in time?

If the oil fields could have been captured relatively intact (a big if, i know. But, this is a question about ifs) who knows where it would have led? It is a certainty that the German offensive in Summer '42 could have been expanded to include other objectives that lack of fuel did not allow at the time. More importantly with plentiful fuel supplies the Southern offensive could have continued indefinitely, possibly changing everything.

The loss of those oil fields would have been crippling and severly reduced Russia's ability to operate. Do not forget that, at the same time, it would boost Germany's abilities and resources massively.

Even if you import oil that is going to take time, resources, planning, negotiation - those well fueled German tanks etc that are driving at your infantry who are all desperately piling on the only working lorry will be arriving far sooner!

Imagine if you were in charge of Russia and you lost 3/4 of you oil at the same time as your enemy gained it. Yes, you can stall them for a short while but the end result is pretty inevitable. If you negotiate now you might get a better deal than if you hopelessly fight for a year or so?

Would USSR and Europe stand the fascism if Baku oil had been lost?, Sultanov, Ch.A.

Transporting fuel tankers by sea from Baku to Krasnovodsk, 1942. 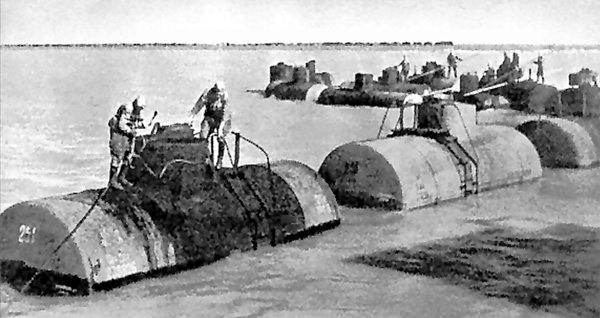 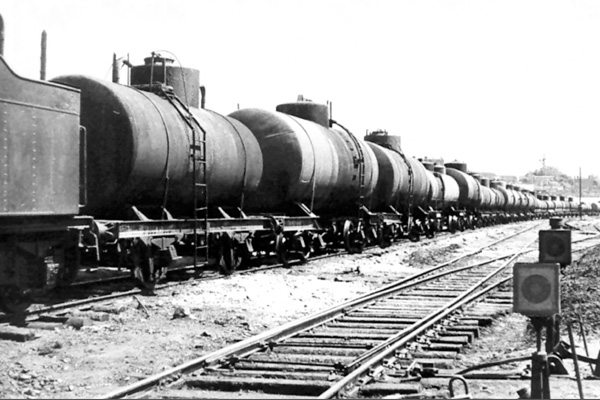 Written by Azeri geologist and oil engineer, Sultanov Chapay Ali oglu, who lived in Baku during the war and has written several books on the Soviet oil industry and the wartime experience. He claims that the evacuation of Baku oil technology and personnel in the face of the German advance in 1942 was a serious strategic mistake by the Soviet government which reduced output from Baku by around 40,000,000 tonnes while only producing about 4,000,000 tonnes from the entire "Second Baku" operations established in the east. He concludes that the direct loss of production from Baku had a significant real impact on the Red Army and the Soviet War effort, while the new production generated elsewhere would have been completely insufficient to enable the Soviet Union to survive had Baku actually been lost. 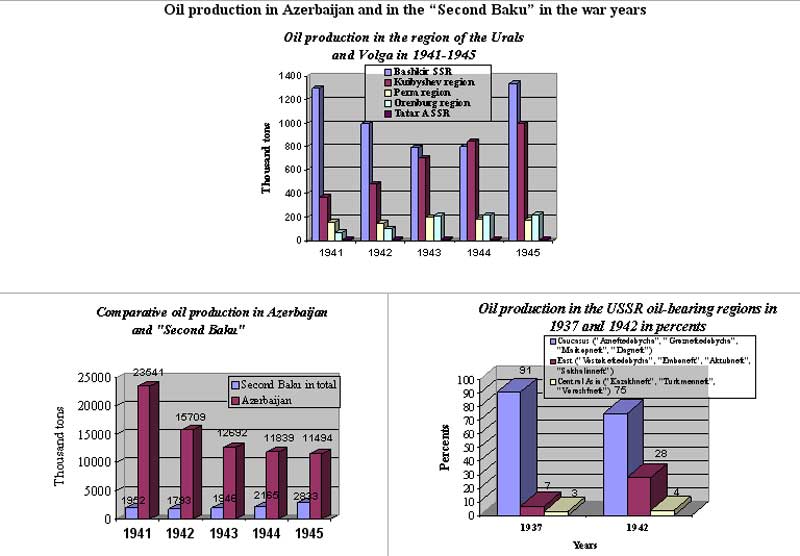 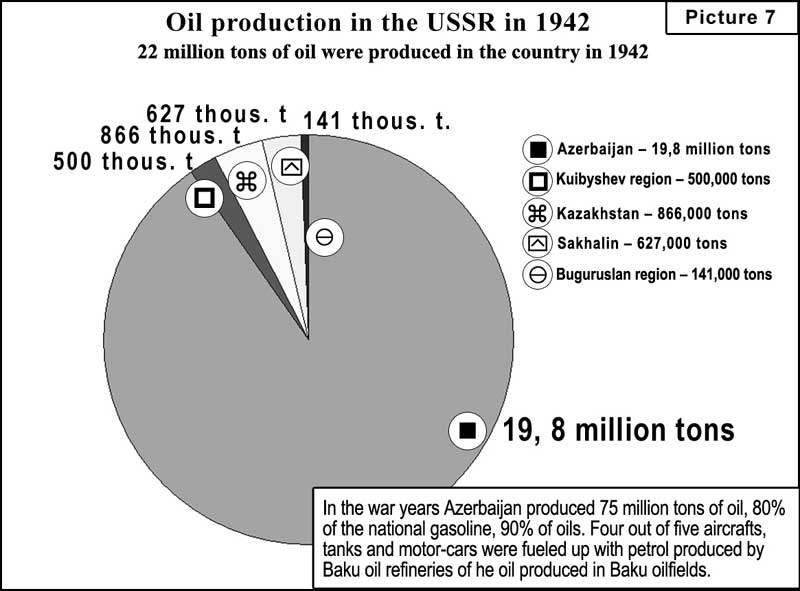 Oil is is a very attractive target for insurgents; about half Iraq's oil in certain areas is still being used by various rebel groups, for example. It's impossible to say what would happen, but most likely, the Wermacht would not be able to maintain effective control and the hypothetical is moot.

Realistically, the Soviets would just relocate their equipment and it would not even get to that point.

It's possible that there would not be an insurgency, or that the Wermacht could effectively control it. But in practically all cases of a major resource center being occupied by a hostile power - Afghanistan, Iraq, Syria, Yemen - the result was a morass of instability that made the occupation barely if at all worthwhile. If anything, the Caucusus would be harder to hold than those examples, because the technological gap between modern states and poorly armed insurgents has widened.

One more important point - Stalin genocided the Chechens so that they would not assist the Nazis in controlling the Caucusus. He thought that they would otherwise give the Wermacht a base of support in the area.

Soviet refineries were making diesel; Germans used gasoline. The Germans found this out after they captured an oil reserve with millions of gallons of diesel. They torched it so the Soviets could not used it or fight to regain it. So the Germans would have had to move the oil the gasoline refineries or build gasoline refineries near Baku. However Great Britain the U.S. and Soviets had already a plan to mass bomb the oil fields if the Germans got close to capturing it. It is known also that the Soviets could not continue without the oil from Baku. By continue I mean with mobile units, tanks trucks etc... But it would have only slowed them down. Their troops would have still overcome German forces because their supply lines were done. The German would not have benefited from any captured oil in time before being out run by Russian forces and lend lease oil from U.S. getting the Russian mobile forces moving again.

Not the answer you're looking for? Browse other questions tagged world-war-two soviet-union ww2-european-theater caucasus or ask your own question.

15
What factors discouraged the Nazis from focusing all their forces on the Caucasus region during Operation Barbarossa?
3
Did the Soviets have an alternate source of oil in Iran during World War II?

11
Did the Germans use a "Verdun"-like strategy at Stalingrad?
9
How close did Germany come to interdicting Soviet oil shipments from the Caucasus in 1942?
3
Did the Soviets have an alternate source of oil in Iran during World War II?
3
What did Russia do about Caucasus oil after the collapse of the Soviet Union?
3
How strongly defended was Baku in 1942?
26
How did the Axis intend to hold the Caucasus?
10
Why did Fall Blau start at Voronezh instead of further south?
7
Was the Volga really Russia's last line of defense before the Urals?
8
What alternate north-south supply routes did the Soviet Union have when the Volga and Stalingrad were under attack?