What kind of heavy horses did the Manchu use?

My friend told me that the Manchus would link 4 horses together and fight. Yufei then cut off the horses feet and won anyway.

Is this true? Where can I learn about 4 horses tied together?

After doing a bit of research, I found nothing on the tactic of linking horses. I've read a bit of Chinese military history, and I mean no offense, but most of the stuff are lies. For example, 诸葛亮 supposedly created an perpetual motion ox to carry grain. This is impossible. Another example is 赵云 killed 100 people to save 刘备's son. A third example is that 关羽，killed numerous generals and their armies to get to 刘备。All of which are doubtful. These stories are like the story that King Arthur had a giant cross strapped to his back and killed the entire enemy army or the story that Lancelot killed a dragon. Chinese history up until maybe the Ming or Qing dynastes is cloudy and full of myths, and not very reliable.

In a more scientific perspective, it would be really hard to chop of the legs of the horses. The lances that the manchu used were just to long. 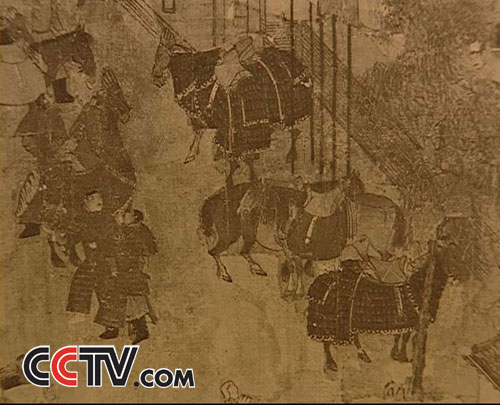 The lances next to the horses look about a horse and a half long.

Early Chinese "history" contains lots of myths. This story you were told is probably a myth.

Not the answer you're looking for? Browse other questions tagged cavalry manchus or ask your own question.

13
Did war chariots ever actually have blades on the wheel hubs?
6
What weapons did Yue Fei use against the Jin Cavalry

7
How were war elephants used against cavalry?
1
Did it make sense to bring along infantry to reinforce attacking cavalry before the introduction of firearms?
8
How were mounted infantry (like dragoons) used in battle?
2
Thoroughbred horse history on British Islands prior to 1686
0
Can the Largest Infantry Polearms be Wielded by Cavalry?
12
Physics of a heavy cavalry charge?
6
How were heavily armored Cataphracts killed?
2
Did Song troops spread black beans on the ground as a means to defeat the superior Jin cavalry? If so, in which battle?
4
Was it possible to “aim for the epaulette boys” during the Middle Ages?