IN 221 BC, Hamilcar, Hannibal's father, made a peace with Rome that divided Spain north and south between Rome and Carthage. The latter got the larger "piece," the area shaded in green on the map below. 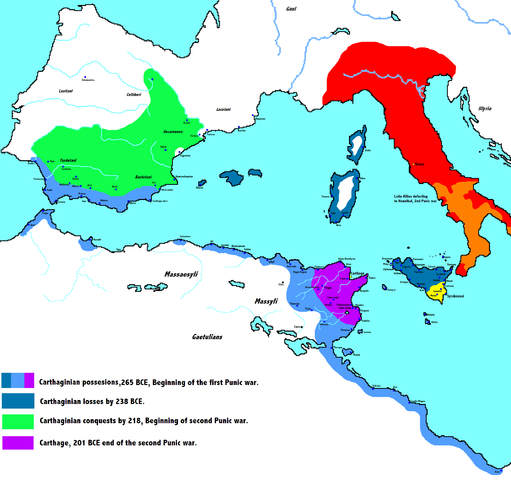 Hannibal broke the peace only three years later, with disastrous consequences for Carthage.

Are there any comparative statistics for population, taxation, or military enrollment for Rome, Carthage, and Carhaginian Spain that suggest that if Hannibal had deferred war for another generation (till the early 200s BC), that the growth of Carthagian Spain would have put Carthage in a better position than she actually enjoyed in 218 BC? That is, should Hannibal have spent a generation "consolidating" instead of attacking?

On the other hand, the causus belli was the Roman protection of Sagentum in the Carthaginian "sphere of influence." Could this have plausibly threatened a "rollback" of Carthagian power that made it imperative for Carthage to strike at the level of her maximum power?

According to the narration in this book and that one, Hannibal did not start the war prematurely. The mistake might have been to start the war at all, but the timing was not bad in itself: Hannibal had at his disposal a substantial army of hardened veterans, while Rome did not.

A lot of reasons have been advanced, explaining the ultimate failure of Hannibal despite his undoubted military genius; here are the main ones:

Waiting for one or a few years would not have improved that situation. Within a few years, Hannibal might have built a navy, but this would most probably have been noticed by Rome, and deprived Hannibal from the advantage of surprise. You don't get competence in siege warfare by training but by attacking cities; extra years in Spain would not have granted that experience. Crucially, each passing year would have dwindled Hannibal's army of veterans: most were mercenaries that were expensive to maintain in peace time (when there is no loot, you need gold to keep them around), and even old age would have cleared his ranks. Meanwhile, Rome would have been free to engage in other battles elsewhere (e.g. in Greece or Illyria) and gain experience. In antique battles, the experience of individual soldiers was a huge advantage, more important for the outcome than the raw head count.

7
Did the Carthaginians have the option of sending Hannibal to Sicily?
8
What role did Jews play in the Punic Wars?
34
Why didn't Hannibal attack Rome after the Battle of Cannae?
3
Why didn't the senate of Carthage reinforce Hannibal in Italy?
32
Where did Hannibal cross the Pyrenees?
2
How did the Romans build their armies for the First Punic War?
2
Why and how did Macedon support Carthage in the Punic wars?
0
How did Carthage Lose the First Punic War to Rome?
6
What cult images are likely to be found in a Second Punic war era Roman field camp?
2
At the start of the Second Punic War, why didn't Hannibal engage Publius Scipio in Hispania, but crossed the alps instead?