What is this strange uniform? 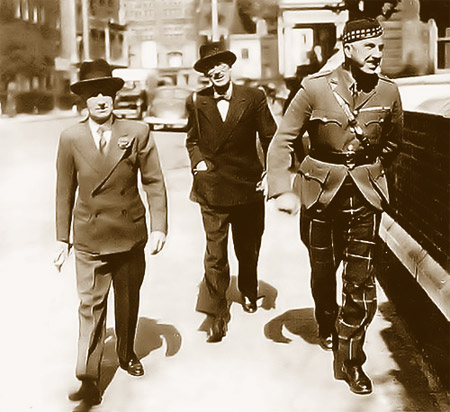 The original webpage where I saw the picture is http://www.colossus-computer.com/colossus1.html.

The Colonel was of Scottish descent and served with the King's Own Scottish Borderers in WW I (according to Wikipedia). The trouser pattern in question could well exhibit the unit's (mainly green-and-blue) tartan. Also, the cape he wears appears very similar to those exhibited at the King's Own Scottish Borderers Regimental Museum's web site. And as for him wearing trousers instead of a Scottish kilt I'd say: maybe it's some (Scottish) Winter uniform :)

Not all Scots ran around in kilts - that is very much a Highland tradition. The KOSB being borderers and lowlanders in general did not see the kilt as part of their own tradition, and thus Tartan Trews were worn - and looked very sharp if I may say so. The pipers of the regiment did wear the Royal Stewart in a Kilt, bit other ranks wore Leslie Tartan Trews (in honor of the Earl Leslie that formed the original 25 regiment of foot in 1689).

Sadly the KOSB were both downsized an amalgamated into the new Royal Regiment of Scotland, and most traditions and certainly the uniform were lost to time. You can still vist the KOSB museum in Berwick on Tweed.

The King's Own Scottish Borderers (formed in Edinburgh in 1689) were a Lowland Scots regiment one of the original truly Scottish regiments formed before the union of Scotland with England (unlike the much younger and junior Highland regiments who were never part of the Scottish establishment) and as such wore trews instead of kilts.

Not the answer you're looking for? Browse other questions tagged 20th-century military british-empire scotland uniform or ask your own question.